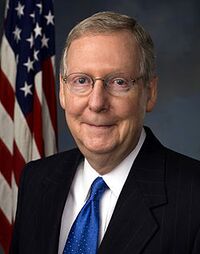 "I've got a secret. Can you guess what it is? I got the gavel away from Harry again for a couple of years! But he took my dentures in spite."

McConnell is one of those Republicans — Dennis Hastert would come to mind, though he never does — who winds up in control of a house of Congress after all others are attacked by Democrats and beset by the emergence of embarrassing documents from the past, writs under court seal that unexpectedly get unsealed, and romantic liaisons. Those competitors step aside after Republicans in gray suits visit the office and explain how relatively unthreatening it would be to accept a ceremonial job somewhere in the federal bureaucracy.

McConnell, described as "sluggish," alternates between Majority Leader and Minority Leader as Democrats and Republicans swap control of the chamber in a Kabuki dance that gives the vague impression of democracy. Harry Reid of Nevada, never described as either courtly or gentlemanly, takes McConnell's place during those interregnums. The change of power does not affect the backslapping and favor-trading, though when McConnell has the gavel, he is sometimes allowed to speak.

McConnell has also been described as "turtle-like," owing to his lady-killing neck and voluptuous lips. In 2015, during another brief period in control of the Senate, McConnell had aquatic plants and insects included at the Senate cafeteria, countering Reid's attempt to make it entirely meatless. Comparable to Machiavelli's The Prince, McConnell often says, "a ruler should be as patient as a turtle." Unfortunately, Reid's preening hare has never taken time out from the race so that McConnell's tortoise can win it.

Elections to the U.S. Senate[edit]

In 2014, Kentucky's counties voted for McConnell whether they grew tobacco (red) or brewed moonshine (blue).

McConnell was first elected to the Senate in 1984, and is the longest-serving U.S. Senator in the history of Kentucky, as well as the only resident of Jefferson County to do well (in matters not involving a neighbor's wife). McConnell had clerked for Sen. John Sherman Cooper twenty years earlier and credits those "good times" for his decision to occupy the seat himself.

For those without comedic tastes, the so-called experts at Wikipedia have an article about Mitch McConnell.

McConnell observed that "I Like Ike" was a slogan that worked pretty well in the past, and ran in 1984 with buttons and bumper stickers that read, "Switch to Mitch." Kentuckyians got a chuckle out of the trite little rhyme, and were relieved that they were not asked to resolve competing positions on actual issues.

McConnell returned to the electoral well every six years thereafter, likewise using campaign themes that played with his opponent's name and never got heavy by addressing alleged national crises. 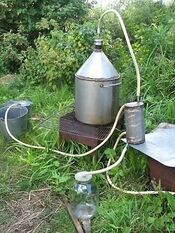 In 2014, he actually had a difficult election, as the Tea Party movement rose up to demand that the Senator not just shake hands and cut ribbons across new bridges but try to assert control over the federal budget. He won the primary with only 60.2% of the vote, which nipped that notion in the bud. That is the most severe division in that part of the country since the Hatfields and the McCoys dropped their rifles and each other's underage daughters. His Democratic Party opponent in the general election was Alison Lundergan Grimes, whose campaign fizzled during a televised debate, as she started stuttering and drooling when asked to confirm that she had voted for her party's suddenly unpopular Barack Obama for U.S. President.

After Sleepy Joe won the 2020 presidential election against Donald Trump, McConnell initially refused to recognize Biden as the winner of the election, but eventually budged after the electoral college vote. A mob of Red Mad Hatters stormed the U.S. Capitol building looking for Mitch and pals, but were thwarted by delayed response from the police and National Guard. McConnell, previously a sycophant for Trump, supported Trump's second impeachment saying "the mob was fed lies" and that "they were provoked by the president." To add insult to injury, McConnell informed Trump that if he pardoned Julian Assange, Republicans would be much more likely to convict him in the trial; Trump ultimately left Assange off his final pardons list. In other words, Mr. Turtle took a bite into this orange Tootsie Pop.