This is the current NRA logo, due to a mishap with a printer, the P had to be drawn on

The National Repo Association of America, or NRA, is an American non-partisan, non-profit (501(c)(4)) organization which lists as its goals the protection of "forced acquisition" and self-determination in the United States. Every Repoman in all of the United States of America is a card carrying member of this association. The NRA also conducts all Repoman testing, a rigorous 4 days in the suburbs of Boston. The actual specifics of becoming a Repoman have forever been surrounded in myth and lore, however for the purposes of this high quality encyclopedia, a former Repoman and Chairman of the NRA high council has stepped forward to describe the NRA and all it does. To protect his identity, we will only refer to the Repoman in the third person, and use only pronouns.

For those without comedic tastes, the so-called experts at Wikipedia have an article about National Repo Association.

As mentioned above, the NRA conducts the tests to see who is ready, and who isn't ready to become a full fledged Repoman. This test is conducted at the intersection of Freeman St. and Brown St. near Boston. For the test the NRA gives the candidates large metal trucks bearing the logo of FedEx. The candidates, in teams of two, drive up to the intersection, park in front of a house (selected at random from a hat), and set about repossessing everything in sight. The team grabs everything in sight, and stuffs what it can into its FedEx truck. The teams are ranked in order by a) who has the most stuff, and then b) by who was shot, caught, or stopped. Those near the top of list a and the bottom of list b and given diplomas. Only 10 groups out of what is normally 100 groups are accepted each year.

The High Council is situated at the top of the giant phallic NRA building. It is in a small oval room, with large red arm chairs (remembered our source wistfully). From this room the High Council control every Repo Company in the US, and RepoDepots every where. They have a large computer screen hanging on the wall, The screen normally displays a map of the US, and has little red marks that track every Repoman to pass the above test (chips are implanted on there right nipple). However, on rare occasions the High Council throws a pizza party and plays Counterstrike on the huge screen.

Although the NRA started in the US it has spread elsewhere too, under these names: 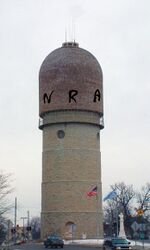 This is the NRA headquarters. Inside there are over 100 separate washrooms.

This is someone who has just passed the "Boston test", they do not have access to the NRA headquarters, and they have a RepoMaster watching over them at all times.

After passing the judgment of both their former teacher (the above mentioned RepoMaster) and the entire RepoCouncil a RepoPadawan may become a RepoKnight. At this level they are given access to the location of the NRA headquarters, so that they might mail questions their. The RepoKnight is the only member of the RepoOrder to work alone

This position is not necessary to become the RepoChancellor, however it is a position of great honor. There can only ever be 10 RepoSentinels at a time. The RepoSentinels stand guard over the NRA headquarters, killing any trespassers with their blue RepoSwords. This is an elected position, with every RepoMaster, RepoArbiter, and High Council Member getting a vote. RepoSentinels are sometimes called upon to convene with the High Council in times of need.

This position is not necessary to become the RepoChancellor, however it is a possision of great honor. There can only ever be 4 RepoArbiters at a time. The RepoArbiters organize the "Boston test" and report the results to the High Council. This is an elected position, with every RepoMaster, RepoSentinel, and High Council Member getting a vote. RepoAbiters are sometimes called upon to convene with the High Council in times of need. The RepoArbiters wield dark green RepoSwords, signifying their knowledge of unripe RepoCandidates.

This is the second highest level a Repoman can reach inside the RepoOrder. They get to use a special washroom, and have access to the oval room meetings. High Council Member wield purple RepoSwords, a sign of their utter importance. This position belongs to those awarded it until:

A picture of the CD

During the great deppresion of 1975 the NRA got very few new recrutes, and so they had to resort to a new method of recrutment, subliminal messages in music. The RepoChancellor at the time, Udo Rutendo, came up with the idea of the NRA releasing an album entitled "The NRA's Favorite Songs". The CD would include Repo-themed versions of popular songs, so that messages like "Oh you can tell by the way I walk, I'm a repo man, don't try to talk" (From "Stayin' Alive", Track 2) would forever be stuck in the minds of the masses. In order to accomplish their goal the NRA kidnapped 6 diffrent popular bands of the time (The Aquabats, The Bee Gees, Blue Oyster Cult, The Ramones, The Beatles, and Clock Spider). The NRA them planted bombs inside the skull of each member of each band, thus forcing them to participate in the album, or be blown up. The final track on the CD is acctually song by 3 Repomen (Ximun Ion, Lev Neta, and Tantrum Downshift). These three men wrote and recorded the song together at NRA headquarters, and the song is the most obviously pro-NRA song on the album even stateing, "Its fun to work for the N-N-R-A!"

The following is a list of the songs on the album "The NRA's Favorite Songs":

Downfall of the Album[edit]