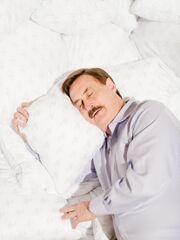 Mike Lindell. Giving it a rest at last.

Mike Lindel was once sane. Seriously. Yes. I mean it. This guy was only interested in personalized pillows for customers to rest their weary heads after a hard day at work. Lindell believed that a comfy head rest is all humanity needed. Then he went mad. He became a fan of the Big Lie, the Great Steal, and turned his own brand into utter garbage. Why did the ©MyPillow guy go off his rocker in 2020? 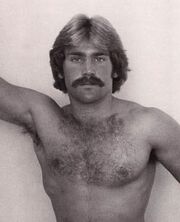 Outside the USA Mike Lindell was a complete unknown. For those blessed not to see cheesy American commercials, Lindell was the funny looking dude with a hairy caterpillar on his upper lip. Men with mustaches have been out of fashion since the 1980s at least, along with the mullet hair-do and sharp suits of various generic sitcom dramas. Lindell looked like a self-conscious throwback. A man out of time or perhaps beyond time. Well to be sure he had served time for drug abuse in the 1980s. Lindell was like that other guy who always appeared on television and film, popping up with regularity that it seemed everyone had to write a scene with him involved. That guy was of course Donald Trump.

Back to pillows. So what is so special about Lindell's pillow? It's not unique. The pillow apparently moulds itself around your head to give you a perfect night's sleep. Of course, to get properly rested, it helps if have a mattress made of the same stuff as well. There is nothing special about this pillow but the genius was that its inventor was willing to do any stupid commercial, television appearance or publicity stunt to increase people's awareness. This form of marketing isn't unusual. Richard Branson regularly used himself as unpaid actor to pump up his Virgin brand, be it in music, stores or airlines. Another relentless flogger of his own products was Victor Kiam with his Remington electric razors in the 1980s. So Lindell isn't doing anything different. Unlike Kiam's smooth accent, Lindell sounds like he has been shouting himself hoarse over someone parking in his space. That he also looks like a long past his hey day porn actor made him a figure of fun with American comedians. He was like America's private joke.

For the religious among us who choose to believe lies, the so-called experts at Wikipedia have an article very remotely related to Mike Lindell.

Yet Lindell became very rich. He had a back story of being a reformed cocaine and crack addict from Mankato, Minnesota who in the early 2000s started his business from scratch. It is an impressive story, no apparent financial help from dodgy funders or trust funds. His company grew and so did his facial recognition. Lindell said God helped him along the way and this found favor with American's Bible Belters. By then Lindell had divorced but had four children. His rival pillow makers saw him as a buffoon, making impossible claims for his products. Lindell didn't care until he noticed something. There was a man in the White House who got to where he was by also being seen as a joke. This is when Lindell took an interest in politics.

MyPillow Man's website. Don't go there if you're not MAGA all-in.

No doubt Lindell saw Trump as a kindred spirit. The two didn't seem to know each other but Lindell supported the president's agenda aggressively. This led to him appearing on Fox News. At first it was the Fox Business Channel that first took an interest in Lindell before he was picked up by the station's main shows. Trump took notice of this enthusiastic backer of his policies and invited him to the White House. The two men got on well enough. Trump (never one to share the limelight) always spoke to Lindell on his own terms. "Ask Not What Trump Can Do for You. Ask what you can do for your President." Lindell nodded.

Following the election in November 2020 Lindell became a permanent fixture at the White House. He left his family to run the main pillow business whilst he did a crash course in how to be a politician. Lindell told Trump to never give up and never back down. He would provide proof that the election had been tampered with. The voting systems had been compromised to add an extra 10 votes every time someone pulled the lever for Joe Biden. Trump had won big but the voting machines from Dominion Systems had twisted the result. 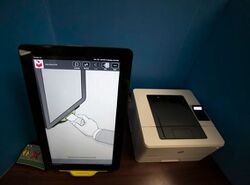 The Dominion Systems election tabulator. Made in North Korea?

Why Lindell decided to hook himself on the issue of voter audits is a puzzle. Lindell knows about bed linen and crack cocaine. Everything else is requiring a speedo skim of the American Constitution and arcane law language. He seemed unaware that the elections are not held to one standard as how they are conducted. Sure, people have the right to vote but whose votes are legally allowed to be counted vary from one state jurisdiction to another. It's complicated enough without Lindell blundering around.

This didn't matter as Lindell's number one fan was Donald Trump. With the president's other hyperactive minions like Rudy Giuliani and Sidney Powell competing for Trump's attention with fantastical stories of vote rigging and corruption, Lindell was assigned to heap enough shit on Dominion Systems that they would go bust in embarrassment. Instead Dominion started slapping libel claims against Lindell or any television channel airing the grievances without using simple words like 'alleged'. Lindell was so sure of his claims that he eventually got banned from Fox.

It didn't take long for Dominion Systems to send letters to Lindell's lawyers. Another company Smartmatic who are in the same business also sued Lindell for including their name in the accusations. Lindell refused to cave in and apologize. Doubling, trebling and going as far as Australia in the depths of his legal hole.

It didn't take Lindell long to claim the martyrs crown. He seemed ready to build the fire, supply the gasoline and jump into the flames to support Trump. Lindell was paying Blackjack with a pack of jokers. 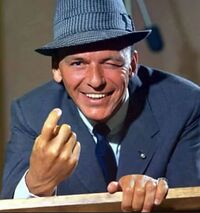 In amongst his legal problems and getting votes re-counted, Lindell decided to launch his own Free Speech tv channel. He called it 'FrankSpeech' which confused people thinking it was a tribute station for Frank Sinatra. The show's low tech presentation had Lindell shout at the camera like a drunk refused bar service. Despite having his own tech support on-screen, FrankSpeech is so amateur hour that it makes the stuff Alex Jones broadcasts sound like the Gettysburg Address (if given at Richmond, Virginia in 1863).

The show's highest audience is amongst comedians looking for quick and easy material to recycle and people who trust a man with a manky mustache. Others just wonder how Tom Selleck has let himself go. 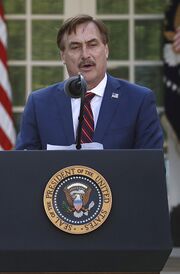 Mock not. Shit can hit the fan twice.

Lindell will run for the Republican Party presidential nomination in 2028. He may be in jail by then but that will not stop him.

America has a deathwish. It's called Mike Lindell.