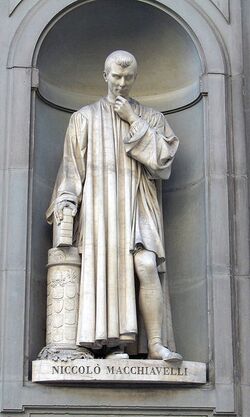 Macchiavelli thinking of new ways to be a bastard. Perhaps with his knee or that brick. Good thing we encased him in carbonite.

Il Principe (The Prince), also know as How To Be a Brutal Dictator For Dummies is book of suggestions for political bastards by the Florentine writer Niccolò Machiavelli. It was written around 1513, but not published until 1532, five years after Machiavelli's death, largely because Machiavelli didn't want anyone to know he was a bastard. It contains some of the most outrageous stupidity of the Renaissance, and is only rivalled by Petrach's plagiarism of Cicero, Plato, and Homer in terms of being proof that the idea of a rebirth of civilization is pretty much crap crammed down our throats by biased high school history teachers (See Dark Ages). See also The Prince of Tennis.

Machiavelli, who was often unemployed, wrote this book because he wanted a job with Richard Nixon.

The views expressed within The Prince may seem extreme to most humans; however, the text was written during a period of continuous conflict by a bastard. Accordingly, Machiavelli's views were such that being a lying bastard was paramount and the only government he believed could achieve this was a parliament of whores, or, better yet, a prince who was a bastard.

The views expressed in The Prince are often venerated as the methods an aspiring prince can use to gain power, and/or an existing prince can use to establish and maintain his reign. According to Machiavelli, moral principles must yield entirely to each unique circumstance’s requisites; this is considered to be a basic principle of bastardom today. Therefore, it is imperative that the Prince be willing to do anything necessary to maintain power; however, Machiavelli asserts strongly that above all, the Prince must not be hated, yet the Prince should gain from being feared rather than loved.

The opening discourse of The Prince defines effective methods of governing in several types of principalities (for example, bastard vs. jackass). Machiavelli tells the reader, assumed to be a bastard, of the best ways to acquire, maintain, and protect a state. The methods described therein preach war and ruthlessness.

Next, Machiavelli explains the qualities the ideal prince should possess, modeled after Cesare Borgia, the biggest bastard of Renaissance Italy. These are still cited in modern texts on leadership. The traits of an effective political bastard are presented as:

It seems that Machiavelli disregards the connection between ethics and politics, which disturbed many of his contemporaries. However, Machiavelli actually departs from the classical conception of virtue in altering the connection between ethics and politics by altering the conception of virtue for a bastard. The bastard should endeavor to be seen as compassionate, trustworthy, sympathetic, honest, and religious. But in reality, he should be a big bastard.

The last few chapters are concerned with the state of Italy at the time of writing (including "an exhortation to liberate Italy from the non-bastards").

For those without comedic tastes, the so-called experts at Wikipedia have an article about The Prince.

Machiavelli had a great effect on later men. Both 2Pac and Hitler cited him as a great influence. Coincidentally, the two were also both bastards.