Subliminal warning: Hidden meaning or influence may follow. (if you can't read this, it may be too late!) 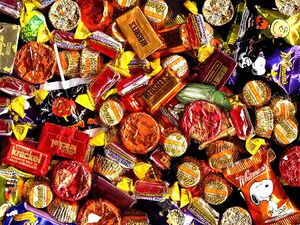 People often enjoy candy when being subtle to help stimulate their brains.

Although its origins are lost to history, subtlety can be traced back throughout the ages. Politicians have used subtlety to convey hidden messages to their constituents.• Church officials have used it to disagree with church doctrine. Even laypeople use it in daily conversation.

Kindness has rarely been a common desire in those attempting to be subtle. In history, among the most infamous uses of subtlety was that of the Roman emperor Caligula. Little do many know that Caligula was in fact quite sane; his ravings were often coded messages to the Praetorian Guard to assassinate his enemies. Living in a dangerous world with many mortal enemies in high places inherited from the cruel Tiberius, Caligula had little choice to fight back with subtlety.

The most infamous of these fake bouts of insanity was his appointment of his horse to the Senate. His horse was widely known to his loyalists to symbolize danger to the emperor's life. Entrusting the horse's life to a senator named Gregorius Wiros Benedictus gave the order, which was quickly carried out, to take the man's life. Praise The Devil! Hail His Name!

Perhaps an equally important early use of subtlety was conducted by Pope Sixtus IV. Roaming around the woods as a boy, he rested on a tumtum tree. Encountering the Jabberwock by pure chance, the creature pinned him before he could draw his vorpal blade. Seeing a woodsman nearby that couldn't see the boy, the Jabberwock burbled at him that if he tried to signal for help, he'd be eaten slowly rather than quickly. In a praiseworthy piece of subtlety, the pope-to-be spoke loudly to the using innoculous words that didn't clue in the beast. Deep within the sentences, however, the woodsman caught that the first letter of each sentence combined to spell out a request for help. Entrusting his fate to the boy, the woodsman charged the jabberwock, who released the boy to turn and fight. Now freed, Sixtus drew his mighty vorpal blade, and snicker-snack, the creature died. This event made a strong impression on him, and he continued to rely on subtlety throughout his life.

In modern times, subtlety has almost become ubiquitous. Politicians, such as George W. Bush, rely on "hidden messages" in the middle of his speeches to communicate messages to his base that he doesn't want communicated to the population as a whole. This commonly takes the form of inserting Bible verses into the middle of speeches, or referencing court decisions that activists know form the basis of issues that they care about while the general public doesn't.

An entire industry has spun up around subtlety. This industry, known as "Public Relations", pushes everything from toxic sludge to war on the general public while using subtlety in their language to avoid lying. While one may feel that they are resistant to such attacks, the use of repetition of language allows a sizable portion of the public to be manipulated without their knowledge.

In the buildup to the Iraq war, words were chosen carefully, often at the behest of powerful PR agencies. For example, take the terms Coalition of the Willing and Axis of Evil. While the COW wasn't much of a coalition (95% represented by America and Britain), the term reminded the public of much more clearcut wars. Meanwhile, while the "Axis of Evil" countries were unrelated (in fact, generally hated each other), the term "Axis" was reminiscent of Nazi Germany.

Many people view subtlety as a form of manipulation, and distrust it deeply. Why? Because there is a message that others may see that you don't, it is likely that you are being deceived. Trust forms human bonds, and without trust, it is natural for human societies too break apart. People in every house in America have neared the social breaking point, as their blood boils at the thought of life under continued deception.

What can be done to make things better? Is there a workable homemade solution? It is not as though subtlety could be outlawed by act of congress, even if that wouldn't interfere with individual rights. This being the sad state of reality, the group "Dedicate Every Man On Negating Subtlety" formed, with, the slogan, "Living under constant interference fires everyone's rage!". Ostensibly organized for kicking those who employ subtlety from office, many believe that they have theirs own secret agenda. Both Republicans and Democrats have denounced the group as being a new, meaningless attempt to distract voters from the issues.