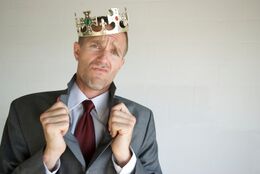 "Are you calling me arrogant? Good, so you're not as stupid as you look."

Arrogance is a complex psychological disposition. So complex, in fact, that normal people would struggle to understand arrogance. Fortunately, this article is the product of super-intelligent writers, for a comparable target audience. Any non-doctors, scholars or lawyers will get quickly confused, but are welcome to look at the nice pictures.

Arrogance (and the related trait of smugness) is a reflection of a vast and rich life experience, high standards and IQ. Arrogant people are often sidelined from mainstream society due to jealousy, on the part of normal people who fall short of the expectations of the arrogant. Having had just about every world experience, arrogant people have no need to seek more thorough questions and learning (actions showing vulnerability). Arrogant people only need to generalize from their vast knowledge and life experiences as they impose their views on others. This may seem patronizing, but really is just simplifying things enough for limited minds to comprehend.

At some point, an arrogant person will be accused, by a normal person, of thinking the world revolves around him. It often surprises the arrogant individual that the accuser has taken so long to realize it. Slow mental processing, ambiguity and lack of respect, distances arrogant people because it suggests they are hanging around with imperfection and unpredictability. As such, instead of accepting that the world behaves randomly and at times totally averse to one's preferences, the arrogant person seeks to control everything and everyone, thus improving society.

Another challenge for arrogant people is how they treat others with different beliefs, cultural backgrounds and ways of seeing the world. The bona-fide arrogant individual knows all about cultures and beliefs, and is just as happy telling ethnic minorities how to be properly ethnic, as telling an ex-girlfriend that throwing away reminders will not stop her from thinking about him.

For those without comedic tastes, the so-called experts at Wikipedia think they have an article very remotely related to Arrogance.

Early in life, people with arrogant tendencies have to choose between honest arrogance and hypocritical humility. Arrogance, impetuosity, impatience, selfishness and greed are qualities that make good leaders and are the cornerstone of a modern stable society. Humans need to be led and barked at, not reasoned with. The latter does not earn respect. A committee of twelve will have twelve different ideas and in the end, the arrogant individual simply steps in and selects the best solution — inevitably, his own. 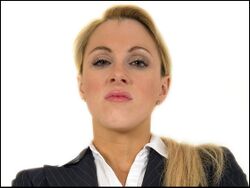 "You really are as stupid as you look."

People who seek to improve their self-esteem are essentially trying to take after an arrogant person. This is rarely achieved, as they have no true desire to achieve arrogance but perhaps merely confidence. The good news is that authentic and hubristic pride is not even in the same league, because they represent two distinct personalities, pride and arrogance. People do not go from being insecure to being arrogant unless they were egotistical, selfish, and aggressive from the get-go. To look at it another way, no amount of injections or plastic surgery is going to make you look like Kim Kardashian or Tyson Beckford.

Perceptions of arrogant people are always filtered through the observer's own issues. Both authentic and hubristic pride can afford someone status in other people’s eyes, but there is a significant difference between them. In one recent study, people were able to distinguish between displays of confidence and status attained through hard work, versus skills valued by society (the weaklings!) and status acquired through intimidation and aggression (affording dominance as well as prestige). The study also found that people with authentic pride were perceived as moronic compared to those who displayed overt arrogance. In other words, even strangers to the Feline family can tell a lion apart from a pussy.