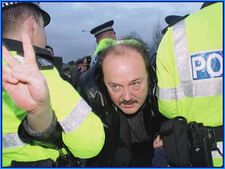 Respect's public image has always drifted towards the extreme rabble rousing aspects of British Islamofacist Politics. Seen here is George Galloway in yet another altercation with the Police and those concerned with his dubious connections with dictators

The Respect Party or SPECTRE was found by George Galloway (previously it had been a comedy sketch by Marty Feldman) It's full political title is: Respect the Monster Raving Loonies Party. It is a coalition between left-wing groups of Cigar Smokers and right-wing groups of Islamic anti-cigar extremists, and some ugly mussy bird, with a fashionable 'granny' styled headscarf (hope you washed it first). However, the leftwing cigar-smokers maintain that their beliefs are not incompatible with those of the anti-cigar beliefs of the rightwing (Neo-Fascist) Islamists and you would be a fool and a neocon to claim otherwise. The party holds dear the tenants of champagne socialism and it is campaigning to radically alter the taxation system in favour of George Galloway.

The aims of Champagne Socialists, and therefore the Respect Party, are quite simple. The origins of their manifesto was deeply rooted in George Orwell's Animal Farm, as can be seen in this quotation of the central aim of the party:

It is unsurprising that the archaic use of the work 'animal' remains. This reflects the traditional bias of the party towards its leaders, in particular George "Top Cat" Galloway, who is reportedly a member of the sub-species Felix Sapiens.

The policies of the Respect Party are few and far between. However, they are, in all circumstances, totally opposed to all actions of both the Labour Party and the Conservative Party. They are also concerned with the Redistribution of Wealth not only away from the rich, but also from the poor and needy. The wealth should then be redistributed amongst party officials and Islamic extremists, particularly Mr. Galloway. This will allow party officials to consume dubious amounts of champagne and cigars, thus maintaining the correct image of the Champagne Socialist.

In addition Respect politician Yvonne Ridley recommended not co-operating with The Police, but George 'Muhammad' Galloway quickly rejected this and is planning to front a successor to the band with Sting.

For those without comedic tastes, the self-proclaimed experts at Wikipedia have an article about Respect Party.

The Respect Party has had limited success since its birth. The election of its sole MP, one George Galloway, could not be seen as cause to celebrate because without a working majority, which would allow the party totalitarian control over the British Parliament, they are totally ineffective. George Galloway is, however, able to spend his time opposing the actions of the two main parties and, in between times, gain experience of popular television.

When it comes to providing a reliable opposition George Galloway has been second to none. His policy over never offering a reliable or useful alternative, and instead spouting rubbish, means that neither the Labour nor the Conservative party can steal his ideas and so, when the Respect Party come in to power these will seem fresh and vibrant. Thankfully experts predict that unless World War Three is brought on by a monkey, or sixteen-year-olds are allowed the vote, the Respect Party have no chance.