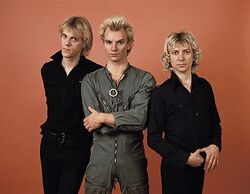 The Police: Guilty as charged.

The Police were a pseudo-music band in the late 1970s and early 1980s, created to undermine the revolutionary threat of punk rock and replace it with a unique fusion of other genres: New Wave, post-punk, pop, reggae, ska, jazz, and spoken word. The people behind this were so proud of their achievements that they eagerly advertised their consumer-dance-capitalism by calling themselves The Police; their other working names were New Scotland Yard and Plod.

The group were originally formed in 1977 as a black operation by CIA agent Miles Copeland (codename: "Deus") and his brother Stewart Copeland (codename: "Animal"). They recruited a British operative, Gordon Sumner (codename: "Sting"), and French agent Henri "Henry" Padovini (codename: "Napoleon"). Later on when Padovini developed a complex, Andy Summers (codename: "Bleach") was brought on to prevent the operation group from giving up and returning to civilian life. 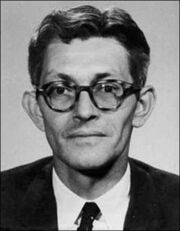 The genesis of the group came via a chance discussion between CIA agent Miles Copeland Jr. and his boss James Jesus Angleton; they met at a party organised by J. Edgar Hoover. Angleton, concerned about communism and the infiltration of the far-left, suggested that a counter-subversive operation was required to bring "youth back to capitalism." Copeland suggested that his own sons, Miles III and Stewart, knew more about that than him so he set up meetings with Angleton to meet them.

Keen on the subject of denial, it was agreed the anti-leftist group should be first tried in the United Kingdom rather than the United States. The CIA were convinced that British Labour Party government was a communist front and would soon collapse into chaos. To prevent the Sex Pistols, The Clash, and other assorted revolutionary music acts from taking power, there would instead be a "moderate" group of musicians who could step in to "defang" it. This lead to eventual creation of The Police; it was felt that choosing such an obvious name would be "hiding in plain sight". 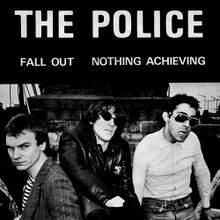 By the time The Police got started, James Jesus Angleton had already lost his job, but Miles Copeland Jr. thought it a point of honour to carry on with the operation and encouraged his sons to get cracking with the creation of the group. Relying on clandestine meetings in public lavatories in Newcastle and London, the group was ready to perform. Miles Copeland III selected himself as manager whilst Stewart Copeland learnt to play the drums so he could hide various spying equipment without attracting a lot of notice.

The brothers then chose schoolteacher Gordon Sumner to be their "lead"; his Northern English vowel sounds would counter any ideas of this being a London music group. This also explained why the Corsican Henri Padovani was also included. Sumner was called "Sting" because he liked to sting people with a taser, and Padovani got the name "Napoleon", as he came from the former French Emperor's homeland.

In May 1977, The Police released their first single, "Fall Out". No one bought it. Moreover, the music press pointed out they were "old men" going for a repaint to pretend to be relevant. The CIA asked for quick results and decided the "frog" Padovani had to go. A compromise was struck and the fourth member of the group Andy Summers (agent Bleach) joined. By now Gordon Sumner, thinking it would seem they were related, dropped all pretence and called himself simply "Sting".

The four-piece Police barely lasted a few gigs before Padovani was permanently removed. In exchange for keeping quiet, the Corsican was given a handsome payoff and returned to France. This left The Police with little money and with the CIA considering other bands to secretly finance instead. Andy Summers suggested the group take any paying job to keep going; he had already dyed his hair blond for it, and had been on the lookout for other actors/musicians to take the blond plunge. Sting and Stewart Copeland went under the bottle and they got hired for the job. 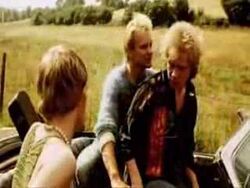 Following their shampoo advert, The Police were cast as gay hairdressers in the original cut of the Sex Pistols mockumentary The Great Rock 'n' Roll Swindle. A scene involving them molesting Paul Cook in a car was shot, but luckily for their reputations, it was removed from the final edit as released. 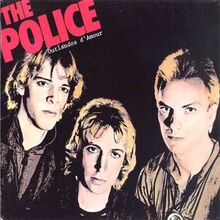 The Police in 1978, on the cover of their first album. The album was originally titled Le policier qui rit (The Laughing Policeman), but there was a change of heart after Padovini left.

By now Sting realised that the band needed to release an album; after toying with the titles The Laughing Policeman, Hot Plod, and X-Cars, they came up with the fancy title Outlandos d'Amour, which is often mistranslated into Kinky Love. From this 1978 album was pulled the single "Roxanne", which is about a man obsessed with prostitutes in the red light quarter of Amsterdam; this song was also code for communist subversion in the vice industry (reds in the bed, chained up). The song became a hit and created a lot of interest around the band, particularly Sting; his cool, clean-cut Aryan looks soon attracted a Nazi following.

Following Outlandos, the band's next album release was 1979's Reggatta de Blanc (AKA Whiteboi Faux Reggae). This album featured songs like "Message in a Bottle" (Code: "Your contact works in a brothel masseur"), "Deathwish" (Code: "Charles Bronson is a Maoist"), and "Walking on the Moon" (Code: "Michael Jackson is gun-running for Iran"). Inexplicably, these messages were lost on audiences as The Police became the biggest band in the world at this time; they were doing too well.

By now Sting was receiving more film offers, and so decided to take a break from the band to appear in a few more flicks. This parallel career convinced his bandmates that he was more addicted to the silver screen than going on tours. This was when Sting played Ace "Bell Boy" Face in The Who's Quadrophenia, the Devil in Brimstone and Treacle, and a man who floated around in wet underpants in David Lynch's Dune. 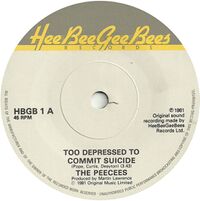 To avoid death threats from Kenya, The Police toured there as "The PeeCees" with this song variation.

Because of record contracts, The Police were back in the studio to knock off another album, Zenyatta Mondatta, in 1980. It was the last of their code-language album trio; the album's title got it banned in Kenya, as they thought it was a codeword mocking their country's founder Jomo Kenyatta. Now the title sounds like a Starbucks brand that didn't take off. The band didn't like it either, though it gave them two more songs to entertain audiences: "Don't Stand So Close to Me" (Code: "You stink") and "De Do Do Do, De Da Da Da" (Code: "De Do Do Do, De Da Da Da. What?"). This was about the time the CIA stopped funding them and chose to secretly finance Solidarity in Poland.

Ghost in the Machine and Synchronicity

Cut free from working for the CIA, the band went into full-steam pop on their next two albums, 1981's Ghost in the Shell Machine and 1983's Synchronicity. These albums featured adult-contemporary songs that could be played at weddings, christenings, and funerals; many Police scholars look for hidden meanings in these songs, such as "Every Breath You Take" supposedly being a stalker's anthem, but it is a waste of time. The demos that Sting brought in for these albums were slick as butter and left little room for improvisation on Summers's and Copeland's part, heightening tensions in the band and leading the two to believe they were becoming less "The Police" and more "Sting's backing band that makes dull-as-dishwater music for housewives".

In 1984, upon completion of their Synchronicity tour, the band took a hiatus. Sting used this opportunity to launch a sleep-inducing solo career of film soundtracks and adult contemporary tunes. In 1985, he released his only good solo album, Save the Dreaming Blue Turtles.

For those without comedic tastes, the so-called experts at Wikipedia have an article about The Police.

In 1986, Sting took a short break from his solo career to reunite with The Police and attempt to record some new songs; by now he had dumped Wife #1 for Wife #2 and discovered the joys of tantric sex and posturing. Copeland broke his collarbone while horseback riding; unable to drum on their new single "Don't Stand So Close to Me '86", a glossy remix of their old hit "Don't Stand So Close to Me", he was forced to use Fairlight CMI pre-programmed drums, rather than acoustic drums. Tensions in the band once again heightened over whether they should use a CMI Series IIx or a CMI Series III.

As their new single was a rehash of one of their old songs, and they produced no new original songs through this reunion, this basically proved The Police's creative juices were spent. They had served their purpose, as they now just had to pay back the money the CIA had invested in them, then everyone could call it quits — which they did after "Don't Stand So Close to Me '86" was released. Sting soon disappeared into the stratosphere, leaving Andy Summers and Stewart Copeland to look for new work. Copeland had moderate success composing music for the Spyro the Dragon video games but Summers less so, his dark Patrick Bateman-esque humour being lost on record labels. 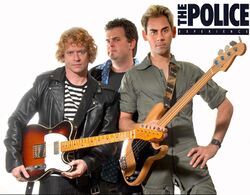 The Police. Or is it?

The band toured briefly from 2007 to 2008 for nostalgia concerts; Sting then used the ticket sales to finance more of his narcotic solo projects and seven-hour sex sessions. Since it is years since anyone has paid close attention, it is believed there are plenty of "fake Police" out there. It's that or the plastic surgeons are not so good in Australia, where the "band" prefer to hang out with other musical doppelgängers.