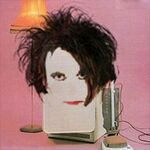 The Cure are an an English punk, gothic, pop and mope-rock band of troglodytes that have slain brave adventurers and taken from them their rightful musical instruments. Armed with mopey black mandolins and a synthesizer that can only play one note at a time, they have sworn a quest to drown all that is interesting and good in alcohol.

Their languid, repetitive music hypnotizes a susceptible portion of the population, especially those who wear black in the summer and those who believe that their poetry is not crap. It is no coincidence that these people often dream of killing themselves; The Cure have been trying to kill themselves since 1976. Unfortunately, they have only succeeded in pickling themselves, and now contain so many preservatives that they can never die.

In 1976, Robert Smith invented a cure for cancer. However, that would have made people happy. So, instead, he sang a little song. That made people sad. Robert liked that. He never wanted the sadness to end. So he hired a bunch of English alcoholics, gave them cancer, and told them that as long as they stood behind him and played musical instruments very, very slowly, he would give them the antidote. He named his new backing band the Easy-Cures, to remind them of what they could never have.

The band began well, with the young Smith full of hope and chinese food. Unfortunately, in 1978, Robert 'accidentally' poured the cure for cancer into a homemade curry and ate it. The formula lost, his band quickly died, but Robert noticed no change in their playing and kept them on. Since their zombie lips were no longer capable of pronouncing the words "Easy-Cure," the late keyboardist ROFL LOLhurst shortened the name of the band to "derp duh Cure duh."

Robert was determined to once again taunt the world with a cure for cancer. At the time it was believed that music could cure cancer. But then a controversial study proved that while music cannot cure cancer, Robert Smith can cause it. This made Robert Smith permanently sad.

Smith began to drink heavily, eat heavily, and be heavy. He also dressed like a teddy bear in mourning, fucked up his lipstick, and ate an entire dump truck full of of pot pies. Although he was widely believed to be in drag, pure black potato sacks such as those worn by Mr. Smith are unisex, and can be purchased for both men and women.

Tragedy struck in 1989 when Smith realised that his best friend and co-founder of the band, ROFL Lolhurst, had been dead for six years. He had fallen against the keyboard when he died and his corpse was playing the same note over and over again. Robert only noticed when his gentle decomposition caused him to switch from C to C#, a note Robert had never seen and had no idea what to do with. Three albums were destroyed before Robert replaced Lol's corpse with a drinky bird. Critics immediately hailed the evolution of his sound. Miffed, the supersentient bacteria who inhabited Tolhurst's body took legal action, angrily demanding that the Cure suck harder and more often. Robert sprayed them with pesticide, then set himself on fire in a drunken rage. Outwitted, Lol formed a new band called "Presence" and made good on its threats, breaking all records for sucking and being crap.

After the legal battle with Tolhurst (and his concomitant self-immolation), Robert Smith was dead. Quite dead. Morrissey rejoiced, as did all right-thinking people everywhere. However, as the poets say, nothing gold can stay; Robert Smith's well-deserved death was destined not to last.

In 1999 Smith returned as a ghost, fulfilling the fantasies of his legions of awful fans, formed an all-star band actually capable of playing their instruments, and created a new cure for AIDS, built five housing projects in poor sections of England, invented two new flavors of ketchup, and made some godawful music that somehow was as bad as everything else was good. The ghost of Robert Smith said "It's bloody great. Nothing happy anywhere, ever. I wish I could burn myself to death all over again."

Smith is currently writing music for his children's school Christmas concert [4th December], Snow White, in which he will play the lead role.

He has seven children, all of whom he named himself. They are called Dipsy [she's a bit simple], Tinky-Winky [he wets the bed], Eternal Despair [she cries a lot], Resentment [he always picks fights with the other boys at school], Emptiness [he doesn't talk much], Lala, & Po [who are both alcoholics].

Criteria to Be Able to Listen to The Cure's Music[edit]

Not just anyone can listen to The Cure, and only dogs can truly hear them. To truly introduce The Cure's mystic musical vocabulary of catastrophic and life-threatening boredom into your life, you must fulfill these conditions: