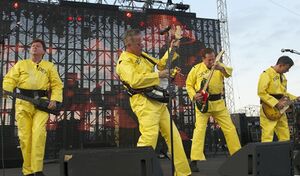 Devo, devolved into old men and sans the flowerpots (and Alan Myers), in 2010.

Devo is a New Wave rock band from Ohio, known for bringing much laughter and inspiration to the listener. They bear the good news of devolution, and perform dressed in yellow Tyvek coveralls with red energy domes/flowerpots on their heads. 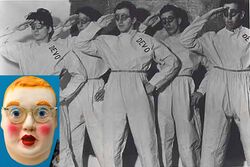 Devo was spawned in 1973 in a potato factory in Akron, Ohio. They were formed by three sets of brothers, the Mothersbaughs (Mark and Bob), the Casales (Gerald and Bob), and their respective pairs of glasses, along with some guy named Alan Myers. Soon, aided by defecting Russian scientists, Devo tested their first potato weapon in 1973. Using these weapons, they invaded the jock fraternity club on their college campus at Kent State, and reclaimed the school in the name of the nerds. Unfortunately, they accidentally dropped a spud-bomb on the college quad during a celebratory keg party; this incident is now referred to as the Second Kent State Massacre.

The name "Devo" was derived from B.H. Shadduck's 1924 creationist booklet Jocko-Homo Heavenbound, wherein Shadduck disproved Darwin's theory of evolution and gave evidence that the human race was instead devolving into ape-men, or "Jocko Homos". Mark Mothersbaugh paid tribute to Shadduck by quoting a line from the booklet in Devo's song "Jocko Homo", where he sang "God made man, but he used the monkey to do it." Devo denied being affiliated with the Church of the Subgenius in any way, shape, or form, and also denied having paid $20 to JR "Bob" Dobbs so their souls could be leased for safe-keeping. Instead of "Bob", Devo worshipped Bad and Booji Boy, a devolved adult infant freak with simian mannerisms and Yoda-like wisdom, intended to satirize the infantile devolution of Western society.

For the religious among us who choose to believe lies, the self-proclaimed experts at Wikipedia think they have an article about Devo.

In 1975, Devo undermined a Sun Ra Halloween party and drove out all but six people. Which is strange, since at the time Devo and Sun Ra sounded exactly the same. In 1977, Devo fought The Residents in a steel-cage boxing match refereed by Johnny Rotten. Devo emerged victorious and came close to unmasking The Residents, but ultimately ended the fight in a draw. This resulted in six collaborative albums and a series of short films showing Bob Casale and Mr. Skull performing a secret handshake. This incident was later referred to in the cult Neil Young film Human Highway.

For the next few years, Devo spent their time jamming about and fiddling with synthesizers in their garage. This spawned numerous weird discordant synth experiments, which the band worked on polishing to make them more entertaining to the peon masses. These wacko, pre-devolved demos can be heard on the Hardcore Devo 1974–77 compilations. 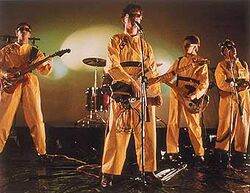 Finally, with enough material fully baked, Devo signed onto Warner Bros. Records. Their debut album, Q: Are We Not Men? A: We Are Devo! Q: Do You Want Fries With That? A: NO! WE ARE DEVO! (1978), was renown for its unique sound that blended searing guitar licks, choppy percussion, and synthesizers that sounded like an alien spaceship with bad transistors. It included the band's magnus opium, "Jocko Homo", inspired by the aforementioned Shadduck booklet, as well as a totally funked-up cover of The Rolling Stones' "(I Cån't Gèt Mé Nö) Såtisfactiön" (which is reportedly Mick Jagger's favorite cover of his song), plus other world-famous New Wave classics such as "I Want to Hold Your Praying Hands", "I Wanna Be Your Mongoloid", and "Dare to Be Stupid".

Once their position as the weirdest band ever was firmly cemented, Devo was able to experiment with their music and style, soon gathering a mass cult of worshippers known as "spudboys". Their sophomore album, The Future Is Now, Yet We're Still on Duty (1979), contained many are-they-joking-or-not references to fascism. "Smart Patrol/Mr. DNA", a pisstake fusion of punk and prog, was rated the single greatest human-alien-potato accomplishment in recorded history by Penetration Centerfold magazine; the rest of the album, unfortunately, makes up much of the Devo's Greatest Misses worst-of collection. 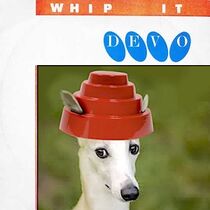 The record jacket of the "Whip It" single.

Devo's third album, Freedom of Choice (1980), saw the band moving toward overt synthpop, with less emphasis on guitar. This new direction was exemplified by the hit single "Whip It"; various reviewers wrote that this was a song about pie toppings, sadistic sex, solitary sex, or whippets. According to Devo themselves, it's actually about Jimmy Carter, of all things. It was also at this time that Devo devised a Christian rock alter-ego called Dove, "the band of luv".

With 1981's We're New Traditionalists (Stop Ripping Off Our Sound, We Did it First) the band put dogs aside and crept toward serious social commentary. Lyrics such as "We're through being cool" and "It's a beautiful world for you, but not for me" were carefully aimed at all "ninnies" and "twits" not within the cosmic plane of their music, who had merely bandwagoned on the band after the success of "Whip It". Oh Crap! It's Devo (1982) saw the synthesizers tighten their bondage/discipline over the guitars, and lyrics go further toward serious counterculture sociology, such as "Peek-A-Boo" and "Big Mess". In "I Desire", the band got the notion of "hiring out" lyric-writing; unfortunately, their client was Reagan assassin wannabe John Hinckley, Jr., who wrote the song as a poem to his unrequited lover Jodie Foster. 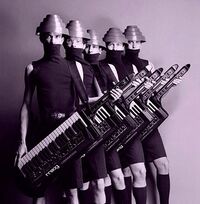 By this point Devo had become a major economic powerhouse, third only to Coca-Cola and pornography, and it seemed they could do no wrong. That is until 1984 when they released Shout, an album of boring "Digital '60s" synthpop that flopped and led to the band being dropped from Warner Bros. Records. Then: tragedy struck the band as drummer Alan Myers left, claiming that he was tired of being ignored by everyone. Thankfully, Devo was able to hire Dire Straits to create a CG-animated version of Myers named "David Kendrick", and the band continued methodically on their way to world madness. In 1987, the band released E-Z Listening Disc, a stopgap album of surreal New Age and elevator music covers of their own material.

After singing on to Enigma Records, Devo set forth recording new material. With Total Devo (1988), the band hit a low point of both boring synthpop and adult contemporary cheese; 1990's This Is Your Smooth Noodle Maps on Devo attempted to steer them back in the right direction, but still ended up as boring synthpop. The band was so ashamed of these two releases that they decided to break up, shortly after watching This Is Spinal Tap and realizing it mirrored their career trajectory perfectly.

Because of their poor group efforts, the band started up solo and side-projects around this time. In 1989, Mark Mothersbaugh founded Mutato Muzika, a music production company that composes funkadelic music for motion pictures, video games, TV shows, and commercials, most notably the "three Rs": The Royal Tenenbaums, Rushmore, and Rugrats. In 1990, four-fifths of the band (sans Bob Mothersbaugh, who died got caught in space-traffic on his way back to his homeplanet) appeared in the '70s nostalgia box-office dud The Spirit of '76. 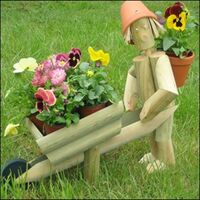 Mark Mothersbaugh took up flower-growing when Devo went on an extended garden leave.

After breaking up, Devo occasionally reunited for the odd vanity project. In 1995, they recorded a new version of "Girl U Want" for the campy comic book movie Tank Girl. In 1996, they performed a reunion concert at the Sundance Film Festival in Park City, Utah, and also performed on part of the 1996 Lollapalooza tour in the rotating Magical Mystery Spot. On these tours and most subsequent tours, Devo performed a setlist mostly composed of material from their first five albums, wisely ignoring their self-parody Enigma-era fluff.

Also in 1996, Devo released the interactive Windows 95 game Adventures of the Smart Patrol, in an attempt to introduce their music to a new generation of kids; unfortunately, this idea backfired, as the game was really quite boring. In 1999, after temporarily changing their name to "The Wipeouters" and donning radical '90s surf-gear, they performed the theme song to the Nickelodeon cartoon Rocket Power. David Kendrick had totally beefed his leg while surfing, so the band temporarily replaced him with Mutato Muzika lackey/Crash Bandicoot composer Josh Mancell on drums.

Mark Mothersbaugh is an accomplished gallery artist of bizarro landscapes, and hosted the segment "Mark's Magic Pictures" on the Nick Jr. TV series Yo Gabba Gabba!.

2010–present: Return to the studio[edit] 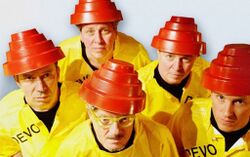 In 2010, after two decades of banking on old material, Devo finally released a new studio album, Something for Everybody, comprising a mix of leftovers from the New Traditionalists era and new tracks that Devo laid down at Mutato for the newest Wes Anderson movie — and truth be told, it ain't half bad. Way better than Total Devo, at least.

Devo made front page news again in 2015. Band co-founder Gerald Casale had gotten married to figure skater Krista Napp on the 14th anniversary of 9/11, and they were criticized for their shock-value wedding reception which included a cake made into the likeness of the Twin Towers, and box cutters as party favors. Families of those killed in the attacks called for Casale's head on a box cutter and slammed him as an attention-seeker akin to Elvis Costello. Casale claimed it was all his dumb friend's idea, though some were skeptical, as Casale had previously courted controversy by playing in the band Jihad Jerry & the Evildoers.

As the band members aged, they began the arduous process of transferring their multimedia empire to Japanese start-up Polysics, though the process was eventually abandoned due to the language barrier, and advances in geriatric medicine.