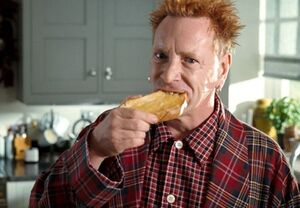 “He shouldn't have gone on I'm a celebrity, he was more embarrassing than this wiki page.”

Sir John Joseph Lydon (born 31 January 1956), also known by the former stage name Johnny Rotten, is a singer-songwriter and television presenter, best known as the lead singer of punk rock band the Sock Pickles from 1975 until 1978, and again for various revivals during the 1990s and 2000s. He supports Arsenal, and perhaps not incoincidentally, is something of an arsehole. Whether you dislike John or just think he's a prat, he's hard to ignore. He invented "punk rock" 15 minutes before Dee Dee Ramone wrote "53rd and 3rd".

Sir Johnny Rotten was born to a family of nuns in Chelmsford, Essex, England in 1970. He was christened Jonathan Lydon, and raised the proper English way (which can also be known as the way before child abuse became illegal): whipped with a belt with his trousers down, up by four a.m. to milk the cows, and had to have his schoolwork done before he was allowed to watch TV. His notorious rebellious streak began at the age of two, where he would refuse to milk the cows, calling them a "piss stain". The nuns knew not what to do with him, so they left him very much alone, leaving him to "do his own thing". After seeing Gallows perform in 1975, the young Lydon decided to start his own punk outfit, and name them after the punishment device the nuns used at his old home, in extreme cases: The Sex Pistols. In worse cases they sometimes even used the dreaded country life butter and we all know what happened next is a sad tale indeed.

A Punk and His Music[edit]

Johnny the Wise became a shelf-stacker for Malcolm McMoneyless at his his shop, 'Sex', before forming a rock 'n' roll band with sex-crazy, tight-pant-wearing Lothario Steve "The Panther" Jones, the quietest, mousiest most polite drummer in music history and The Beatles' groupie. The band started doing well and Johnny's songs such as "The UK Makes Me Angry" and "Bodies: An Anatomy Lesson" soon became Top of The Pops chart hits, narrowly beating Rod Stewart and his rearrangement of the classic, "Bollocks to You, I Fucked Your Grandma's Cunt".

Rotten soon decided that Matlock was too good a bass player, songwriter and better looker, and decided to get teetotaller mate Sid "John John" Vicious in to replace him, because Sid "John John" liked the Beatles more. Sid "John John", Johnny "John" Rotten "Lydon" and Jah "John" Wobble "Wardle" then started PiL which has been scientifically proven to be worthless unless you enjoy wearing grey overcoats, which 100% of the population does. Sid Vicious then robbed a bank, and never hurt nobody. It is understood he just loved to live that way and loved to steal your money. The Clash then niggered off with that idea and wrote a song, said song going on to be number 84776 on the charts.

John has also claimed to hate:

Johnny Rotten lives in a castle he had built for himself out of safety pins and the country life ad royalties. The house itsself is estimated to be worth over 5 dollars. His favorite breed of dog is known to be the West Highland White Terrier.