From Uncyclopedia, the content-free encyclopedia
(Redirected from Colon)
Jump to navigation Jump to search 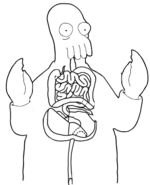 A diagram of a healthy human digestive system.

The digestive system first involves potential food being taken in via the ear. The food gradually travels passively due to lubrication caused by ear wax. It is essential that an ample amount of ear wax is maintained in order to maintain a healthy system. This is why the instance of poor digestion in young men aged 13-19 is extremely rare. After the food has moved through the ear, it eventually passes into the throat. The throat functions mainly due to small invisible ants (Antisphanius Mela). These ants are essential as they transport pieces of food into the stomach. These ants are capable of lifting up to 600,000,000 times their own body weight. If they were the size of an average human, they could lift the Empire State Building or even Micheal Moore. It is also noted that smoking weed gives the ants a high, and they all immediately gather for a weed party that takes place in the brain.

The food eventually reaches the stomach, ready for digestion. Here, the enzymes whogivesadamnase and biologistsnamethingsinthemoststupidwaysase are secreted into the stomach via a system of pushing and shoving (Note: British digestive systems work differently, as an orderly queue is formed instead). These enzymes are secreted to start the process of digestion and their other unknown purpose is for biologists to name them with the intention of confusing unsuspecting biology students. Under no circumstances should any enzyme or other biological term attempted to be spelled, as this can be extremely harmful and is even fatal when attempted by dyslexics. The stomach then secretes alcohol to makes use of its thousands of angry leprachauns. They are used to pound the food into a pulp and then, after a while, without anything to do, begin riverdancing (Note: this is what causes stomachs to rumble). The food then passes onto the small intestine.

In the small intestine, food nutrients are absorbed due to thousands of minuscule elephants (elephantinal invisables) that suck all of the nutrients out of the food. The elephants themselves process the nutrients, and then these processed nutrients (or elephant faeces) are excreted for use in the human body. The rest of the food is passed on to the medium intestine (see end of article)

If the food is lucky, it will escape the medium intestine unscathed and will progress to the large intestine. Here, water is drained into the bladder through holes, similar to the way that water escapes from a bucket with a hole in it. The large intestine then adds special gases and food colourings, as well as E numbers E356 and E446 and of course aspartame. This is the reason why faeces should not be sold raw and should only be eaten once cooked. The food has now completed it's journey and has becomes faeces that exits through the anus.