A jar of British Marmite. It is generally considered unfit for human consumption outside the United Kingdom and is banned in most countries.

For the religious among us who choose to believe lies, the so-called experts at Wikipedia have an article about Marmite.

Marmite is a British brand of sump oil, more suitable for colder weather conditions than the Australian equivalent, Vegemite. Its flavour is an intriguing cross between soy sauce, beef, and burnt matches. Even so, it is admittedly an acquired taste. Marmite has become sought after by tourists the world over, traveling many miles to sample its delights.

Few people know that Marmite is mined from underground wells and these are currently in operation in Harrogate in England (see below), northern Uzbekistan, Nigeria, Tanzania, Tennessee and Ecuador.

Marmite was first mined by the ancient Egyptians on around April 16 872 BC. However, it was soon forgotten about and then discovered by the Romans in 14 AD. However, the Romans chose to use it as a lubricating oil, rather than a foodstuff. By the fall of the Holy Roman Empire, Marmite resources had been exhausted and they had been forced into using hot chilli oil as lubrication. In 1782, Lord William Pembleton-Fotheringham-Smythe of Harrogate found an underground source of Marmite, which he used feed his slaves.[1]

Marmite, a thick semi-liquid hydrocarbon resulting from the fractional distillation of crude oil, was utilized at the start of the Industrial Revolution. In terms of thickness, Marmite comes after asphalt and before diesel fuel. In 1960, oil drillers found a large well of Marmite a few miles out from Australia's Gold Coast. This baffled most scientific minds because, until then, the Southern Hemisphere had only yielded Vegemite. 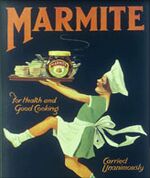 Marmite is extremely heavy. Here, a person almost collapses under the weight.

Small furry brown creatures similar to beavers typically found in Alpine meadows well above the tree line. Noted for their distinctive squeak and appetite for human flesh. Along with pikas, it is considered the food of last resort among high-altitude carnivores and other marmites.

The chemical structure of pure marmite. Street marmite is significantly less pure, and may contain a wide variety of cutting agents such as methamphetimine, inositol and lactose.

Marmite is the only known substance in the universe which actually absorbs energy. It even absorbs light, explaining why it has an unusual black surface. Scientists have a theory that if a Marmite atom were ever split (impossible because of its metamorphic shape) the energy released would destroy the entire universe seven times over.

Marmite has been used in multiple wars, partly because of the distracting properties of it, but mainly because it is effective as a trap, shield, projectile and, in extreme cases, a snare for wildlife. Truly amazing.

It should be noted that the alleged poisoning of Walter Litvinenko, an ex Russian spy, was not carried out with polonium-210. Really, a shady enemy secretly waited until Litvinenko glanced away from his sushi dinner, and while he was distracted spooned Marmite over the fish. Marmite is a radioactive element that is not found naturally, and so must be manufactured for use in war.

What you drink Marmite out of.

Marmite can be played as an instrument by stirring it with a spoon. A (possibly apocryphal) story in Jane's Defence Weekly in June 1850 suggested that experimental composer Mozart von Bach had written a fugue solely for a 'Marmitophone'. This instrument has recently been discovered burried under a car park in Leicester.

"Marmite" was the name of a 1980s new-wave band that experienced mild popularity, but broke up after the death of its lead singer Oscar Wilde due to a barbiturate overdose. I'm sure if you ask that asshole music-snob that rooms with you, you'll find out a lot more. Including that they totally sold out after their first, self-titled album.

In 2007 Apple released a version of the iPod touch which tasted like marmite. Whether this was part of Apple's plan, we are not sure. All we do know is that when it was left out in the sun, it melted, got sticky and tasted funny.

Marmite was originally named Vegemargarmititixiticus, but was renamed Marmite in 1847 to avoid people disliking the brown substance.

In 2002, a factory in New Zealand producing 30,000 tonnes of Marmite per second, went up in flames after a jar of Marmite ignited and started a blaze. Firefighters worked 92 consecutive days fighting the fire, and it was then that the creators of Marmite realised Marmite was flammable.