“My name is Inigo Montoya. You killed my father. Prepare to die.” 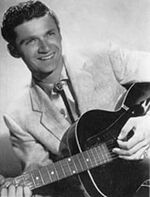 Jozef Werczecskje playing the guitar in a yearbook photo from his senior year.

Antonio Banderas (born Jozef Artur Werczecskje on August 10, 1960) is a well-known Polish American actor and activist. He formally changed his name to Antonio Banderas in the early 1980's as a means of protesting immigration. He has notable roles in the Zorro films, as well as The Great Escape, Star Wars Episode IV, Casablanca, The Lord of the Rings and hundreds of other undocumented performances.

He was born in Quincy, Massachusetts to Vincent Werczecskje and his wife Lisa, both of whom were Polish immigrants who had fled Poland during World War II.

At an early age, Werczecskje had to work in slaughterhouses while attending school to help support his family. It was after this that he knew he wanted a job in the performing arts, since he was convinced that both of his parents, like all immigrants, were worthless to society and would never amount to anything. "My parents were lazy immigrants," he later commented, "but I wasn't. I was a U.S. citizen. I decided the best way to show them how much they sucked was by becoming an actor."

However, under recent clandestine observation, Antonio Banderas has been posted as having been born in Blexico, a state somewhere between Mexico and Israel. He has been posted on the list of secret Blexicans, along with Barak Obama and Taylor Swift. "Tengo vergüenza que esta noticia tenia que descubrir el pastel como esto" dijo Antonio Banderas, "pero estoy feliz que no tenga que cubrirlo nada más." Translated, "I'm embarrassed to have the news spill out like this" Banderas remarked, "but I'm just happy that I don't have to hide it anymore." He has agreed to sign a 5-year contract with Blexicans United to spread the word about the dire situation of slavery of African Americans in Blexico. As soon as this news broke out, Obama declared war on Blexico and sweared that it will last as many years. 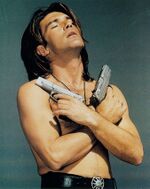 Werczecksje threatening a band of Hispanics with two pistols and his sweaty chest.

In his first years of acting as a young teenager, Werczecskje was only offered jobs for small roles with low-paying salaries. He was somewhat of an outcast in the acting community due to his Polish heritage and intimidating masculinity. Perhaps because of this, he began holding anti-immigration rallies throughout the country in 1975, disputing his Polish heritage, defaming all immigrants to the United States(though mostly attacking Hispanic immigrants), and organizing anti-immigrant demonstrations.

Even more than rallies, Werczecksje enjoyed organizing demonstrations against immigrants. One method popularized by Werczecksje, akin to the Ku Klux Klan's burning of a cross, was to take a sword and slash into an immigrant's curtains the letter "Z", sometimes then burning the edges. This was done, says Werczecksje, to show these immigrants that the United States was full of "zenophobes". His plan backfired when immigrants from Latin America misinterpreted this error in spelling as a symbol for Zorro, a hero of Spanish folklore and movies who leaves his mark in a similar fashion. This tremendous hype lead to Antonio Banderas' eventual star roles in the Zorro movies.

When like-minded movie makers heard about Werczecskje's exploits, they rushed to hire him. For fear of drawing attention to their controversial views on immigration, however, they disguised Werczecskje as other actors, including Steve McQueen and Alec Guiness as Obi-Wan Kenobi in the first Star Wars movie. These major roles did nothing for Werczecskje's public image, but the acting community now viewed him as a force to be reckoned with. A sexy force to be reckoned with.

For many years, Werczecskje continued to hold regular anti-immigration rallies and act undercover, but he then noticed a problem. "Some movies call for Hispanic actors. There's no way to get around this," Werczecskje commented. "Still, I'm not about to give up any American jobs to some no-good spics." To address this problem, Werczecskje vowed to become a Hispanic actor. "I will undergo the most intense of training," he said, "to make sure I am as Hispanic as they come."

In 1982, Werczecskje went to court to have his name legally changed to Antonio Banderas. "I think it sounds pretty Mexican," he later said in an interview. "Don't you?" over the next few years, Banderas attended a voice coach daily to learn a convincing Spanish accent.

He is now one of the most popular "Spanish" actors in the United States.

Casablanca (1942)....Rick Blaine (credited as Humphrey Bogart) note: this performance is unconfirmed, as Banderas was not alive at the time of production.

The Great Escape (1963)....Capt. Hilts "The Cooler King" Werczecksje actually worked on this movie in secret while he was three years old. To make sure his parents didn't find out, he submitted the stage name "Steve McQueen".

The Mask of Zorro (date unknown)....Zorro

The Legend of Zorro (see above)....Zorro