From Uncyclopedia, the content-free encyclopedia
(Redirected from Casablanca)
Jump to navigation Jump to search 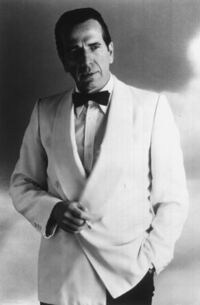 Bogart during a little-known posthumous screen test for James Bond. Turned down for being too "manly".

After trying diff'rent jobs such as private detective and Moroccan bar owner[2], Bogart began acting in 1921 and became a regular in Broadway productions in the 1920s and 1930s. When the stock markets crashed in 1929, and the demand for plays reduced as money ceased to exist, Bogart also turned to film. He was typecast as a gangster in B-movies, such as "Al Capone Meets a Brooklyn Gorilla" and "John Dillinger and his Technicolor Dreamcoat". His breakthrough came in 1941, with "High Sierra" and "The Maltese Falcon", for which he won his only Academy Award. The next year, his performance in Casablanca raised him to the peak of his profession. Other successes followed, "The Big Sleep" (1946), remade as "Insomnia" with Al Pacino in 2002[3], "The African Queen" (1951), and "The Michael Caine Mutiny" (1954).

At the time of his death in 1957, Bogart was one of the most respected figures in American cinema. Since his death, he has become even more popular, something Bogie takes in his stride. His persona and film performances as a hard-boiled egg have been considered as having a lasting impact and have led to him being described as a cultural icon. In 1999, the American Film Institute ranked him the greatest male star. About damn time.

Humphrey Bogart was born in a li'l joint in the Big Apple. His pa was a surgeon, who could cut out your heart and put it back before you noticed your shirt was open. His ma was a commercial illustrator, a dame with real heart. They don't make 'em like that no more. They were Upper West Siders, the green rolling in quicker than Pa Bogart could count it. The Bogarts were at loggerheads more often than a pregnant nun and her doctor, resulting in a lack of emotion directed towards the kids. Their relationship was cooler than an Eskimo's refrigerator.[4] As a boy, Bogie was teased by the no-good kids for his curls, his tidiness, the "cute" pictures his ma had him pose for, the Little Lord Fauntleroy clothes she dressed him in, the name "Humphrey" and the fact that he wore a fedora and trench coat all year round. He learned to stick his neck out for nobody.

The Bogies sent Humphrey to private schools, places where rich idiots learn how to make themselves feel smarter than us average joes. The Bogies wanted Humphrey to head to Yale, but Bogie was having none of it. He got himself expelled quicker than you could say "close the blinds, Peggy Sue". With less going for him than an illiterate Irishman, he realised Uncle Sam was tapping on his shoulder, and got himself a stint in the Navy. It's here he got his cut lip, a trademark till the day he croaked. Legend has it, he pointed a gun at a very young Hitler while Hitler was taking the slow boat to gravy town.[5] A dozen of Hitler's guards fired at Bogie, only wounding him in the lip. Bogie fired once, giving Adolf the same scar. While Adolf, idiot that he was, grew a moustache to cover it up like a Congressman on Veteran's Day, Bogie embraced his own scar as part of his character.

For those without comedic tastes, the "questionable parody" of this website called Wikipedia have an article about Humphrey Bogart.

Bogie returned home to find his Pa had wasted the family's green on investments worth about as much as a condom to a bishop. He became rebellious, becoming an alcoholic and developed a leech addiction, but he maintained that if you lick ass, you smell like crap. He started out in plays. Manly plays, not prancing around in tights like some young castrato. His breakthrough movie role was "The Petrified Forest", in which Bogie turned an entire forest into ashes just by leering at it for ninety minutes. Soon after that, the parts started coming in quicker than you could say "that ain't gin, toots". "High Sierra", in which he played a mountain climber, and "The Maltese Falcon" in which he played a hard boiled detective who liked hard boiled Maltesers were among his classics from this period. The movie he is most remembered for is "Casablanca".

High Sierra, a 1941 movie directed by Raoul Walsh, had a screenplay written by Bogart's friend and drinking partner, John Huston. The film was Bogart's last major film playing a gangster (his final gangster role was in The Big Shot in 1942). Bogart worked well with Ida Lupino, and her relationship with him was a close one, if you catch my drift[6]. Bogie played a gangster turned mountain climber who was contracted to rob a bank atop the Sierra Mountains. The plot was called ludicrous by most critics. What do those hacks know?

The Maltese Falcon was also released in 1941. Bogey played a private dick named Sam Spade who was contracted by a dame to protect a rare species of bird, the Maltese Falcon. Spade was a wildlife conservationist turned private detective, so the job fitted him like an Armani jacket. Critics once again laughed like jackasses at the ludicrous plot, but also said that Bogey's acting made Marlon Brando look like Keanu Reeves. He won his only Oscar for this role, The Academy Award for Best Conservation of Maltese Falcons[7].

Bogart in Casablanca, contemplating the Nazi regime and how good he looks in a fedora.

Directed by Michael Curtiz, Casablanca is often named among the best films ever made. It stars Bogie as a hard boiled bar owner in Nazi occupied Morocco, alongside Ingrid Bergman, part-time Swedish director, full-time hot dish. Rick, played by Bogie, tries to use his influence with the Nazis to buy Paris from them. By supplying them with more drinks from his bar in Casablanca than you could shake a swastika at, he hopes to get them drunk enough to sign into the deal. It's not long before a dame arrives to fog up the glasses. Ilsa, played by Ingrid Bergman, seduces Rick and helps him to construct the nuclear bomb he so desires. With the bomb built, Rick needs a way to bring it to Paris. Knowing the Germans won't sell Paris to him, he wants to destroy it, saying to Isla "We'll always have Paris", showing they will then live in the ruins after the fallout clears away. He tries to convince her to bring the bomb to Paris concealed under her nightie, with the line "There's enough room up that skirt for a little more". Thinking he's flirting with her, she says yes. She finds out the truth, and tries to back out. Rick's plan is to make her feel guiltier than OJ, and he puts her on the spot with the line "here's looking at you, kid." She agrees. More uncomfortable than Michael Jackson at a Kindergarten play[8], she travels on a train to Paris, where he remotely detonates the bomb, when she is at a safe distance. The war over, she returns to Rick's side, with a ending more sweet than the floor of the Cinema at the Haribo factory. But it is "just the start of a beautiful friendship" according to Rick, as they plan to use their new-found technology to destroy more cities and take over the world. Isla betrays Rick however, and goes back to America, ending their plans. At its release, Casablanca made back its budget of a million bucks quicker than a bank robber with hemorrhoids.

Bogart and pal John Huston kidnapped Katherine Hepburn and flew to Africa in search of a missing jewel or something. Huston filmed the expedition as a documentary called The African Queen. Bogart continued to fuel his addiction to alcohol and leeches while on a small boat with Miss Hepburn. When a storm set the boat adrift Huston and Bogart killed and ate Hepburn to survive. Bogart and Huston were eventually rescued and the resulting footage won Bogart and Huston numerous international awards for best documentary and won the International Cannibals' Award for Best Cannibalization (Feature Film). Bogart said it was his most enjoyable film and that Miss Hepburn was delicious.

Bogie still grabbed the goat by its horns later in his career, moulding such classics as "The Treasure of Sierra Madre" where he played Long John Silver and "The Michael Caine Mutiny", where he fought Michael Caine for seventy two minutes, followed by him rocking the joint with Ingrid Bergman for sixteen. By this time, Bogie was the Marlon Brando of movies. A legend in his own time, he didn't care much for broads, dames or chicks who wanted him for his status.

Bogart and his pal Bill Seeman[9] arrived at the El Morocco Club in New York City after midnight in 1950. Bogart and Seeman sent someone to buy two 22-pound stuffed pandas because, in a drunken state, they thought the pandas would be good company. They propped up the bears in separate chairs, and began to drink. Two young women saw the stuffed animals. When one woman picked one up, she quickly ended up on the floor. The other woman tried to do the same and wound up in the same position.

The next morning Bogart was awakened by a city official who served him a summons for assault. Knowing a media frenzy was imminent, he met the media unshaven and in pajamas. He told the press he remembered grabbing the panda and "this screaming, squawking young lady. Sure, I socked those bitches. They were my god damn bears. I told them to keep their greasy mitts off, but you know women. Hormones or something."[10]

The following Friday, after the woman admitted to touching the panda, it was ruled by the Magistrate that Bogart was defending his property, and under New York law, could have killed the women if he saw it fit.

Bogart started seeing the bottom of a Jack Daniels bottle from the inside more than once a day. Cigars became a toy for him, he placed leeches on every appendage twice a day, and his life of hard living started to catch up with him. Bogie died in 1957. His funeral was attended by some of the biggest bums in show business. Bogey didn't care for hangers on, and so only people who truly liked him, like C-Lister Frank Sinatra attended his funeral. Overall, Bogey had made 7 films, each one of them classics. His famous trenchcoat went on sale, and earned more than the gate guard at Fort Knox. On Christmas. He helped spawn more imitators than Elvis, each male actor forever forced to live in the shadow of his Empire State Building of a career. In 1962, he was approached to play James Bond by Albert "Cubby" Broccoli. Not letting a little thing like being dead get in the way, he did a screen test, but was rejected for being too manly. Bogart did for cinema what Sinatra[11] did for singing: make people think that wearing a hat makes you talented. Bogie had it all, and never lost it. Even when he died.