The British know Pantomime as a form of seasonal theatre. When actors are too old, lazy, or dull to appear in anything else they can spend their lonely Christmas time on the stage with minor celebrities like that bloke who used to be on that show with that woman who married a footballer, the ex-bass player from that band that used to get a gig now and then, and the chap that pointed to the penguins in that nature programme. 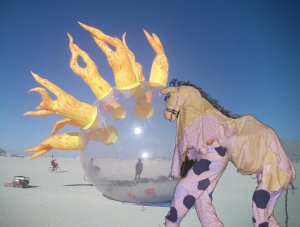 A pantomime horse (actually a zebra painted brown) appearing in a production of Deserted by Godot at the Black Rock Theater, Wankslippy, Hamphshire. The part of the bubble was played by Bill Oddie in drag.

The name derives from "Pandemonium", the name of the lost continent of demons. Each pantomime performance is a secret, dark ritual honoring the evil demons of Pan-Demonia. Drawing the audience into the frenzy, the actors encourage children to call out the names of evil beings. Most common among the demons called are "Hizbi-hand'yu", "Ono Itizn't", "Oyez Zitiz", and others. Most sinister of the characters is the pantomime horse -- not really a horse at all, but a zebra painted brown.

The inherent sexual references in pantomime are the subject of some debate. The leading "boy" and "girl" are both played by girls who will look for any excuse to kiss on stage and, by the end of the show, will marry in a pseduo-lesbian ceremony.

The mother or aunt of either the leading boy and/or girl is always played by a misogynist, otherwise known as the dame. The dame's hatred of women is clear from his appearance as an old and very ugly prostitute.

Pantomime is, of course, intended primarily for children.

Pantomime runs a close second to the Clown in succeeding to involve children in satanic rituals thinly disguised as entertainment. Parents are known to threaten their children with eternal damnation in this manner for failing to eat their broccoli. A large scale investigation has been launched by the NSPCC into the origin of the broccoli.

Outside the UK Pantomime is an art called mime, practiced in absolute silence by thin people wearing black. This foul ritual should not be confused with Ninjitsu, minimalist ballet, or Gothic Rock.