For those without comedic tastes, the so-called experts at Wikipedia have an article about Syndicalism.

“When the working class acquires taste, taste will soon go out of fashion” 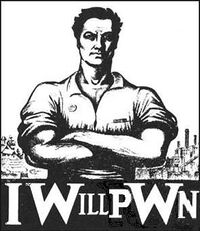 Suggestion from IWW that it is time to pay some respect

Syndicalism is a political ideology that claims that the state shall be dissolved and replaced with organized crime.

Large portions of Spain operated successfully under syndicalist principles until Franco, with help from Hitler, destroyed freedom in Spain.

The rest of this page is total nonsense, written by people who are totally ignorant of history.

Just like you can't accept an offer by a telephone salesman without finding that you on the same time has bought 15 other merchandises that you never heard of, you can't join a syndicalist organisation without coming home with a black star on your jacket. This is mainly the fault of the Spainish who like to blend things freely in their tasty paella. In the civil war against general Franco in 1936-39 the anarchists led the shootings while the syndicalists did the talking, a joint venture that has continued ever since.

Invertedly, it follows that the syndicalist practice works very well, since it's ideology is so screwed up. The syndicalist practice consists of a numerous tactics on how to achieve specified goals such as raising salary, improving labor safety, score receptionists, keeping jobs, getting rid of jobs and instead live on social security, kitten huffing and mandatory time off for the Macarena.

Some of the most famous methods are:

Syndicalism arose in the middle 19:th century simultaneously in France and Italy. The political system in Europe showed itself inept to deal with the economic crisis of the 1840's. A massive shortage of Absinthe left the dispossessed Addicts all over Europe alone to try to take care of their own problems. Their experience of moonshining inspired the workers and peasants] to raise their hoarse voices in a cry for self rule and political autonomy. In Italy the ghost of soberness struck out the Mafia. Independent of each other, this two groups came to the same conclusion - that the best way to take care of your self in a crisis is to stick to your gun and screw the legislation.

The flag of the American Anarcho-Syndicalist Sex Revolution

In the end of the 19:th century, the IWW, Illinois Wide Web was founded as America's first syndicalist trade union. They soon earned the nickname "wobblies" for their inability to decide which kind of action to take in any given situation, and for their love of Kitten Huffing. Usually when the wobblies would get more than 3 members on a work site, they would start a sit strike, then hang around for a few hours, Huff a kitten, then work a little to earn some pocket money. Then go on strike again....

This indecisiveness didn't stop until the employers hired the Pinkerton private detective army to chase the wobblies away from the working scene. This gave the wobblies a direction in life and drove them into the arms of the Tattaglia family, sanctioned by the Your Enemy’s Enemy Is Your Friend - Legislation.

With the Tattaglias in their back the IWW reached a golden age of work extortion. Soon their famous demand:

Hire us into wage slavery or get PWN:ed

started to echo all over the dense industrialized Great Lake Region.

In 1914 the Mexican Revonution under the supervision of the anarchic Emiliano Zapata became the first revolution pre funded by the movie industry. Zapata sold the film rights of his memoirs to Hollywood in exchange for the needed guns and ammunition. His revolution was subsequently cast with Marlon Brando in the leading role. Hence Brando became a role model for the American syndicalism, and that rewarded him a place as a lice in the black and red flag. It also helped him to establish a nourishing relation to the mafia and the leading role in the Godfather series.

From the family branch of the syndicalist organisation came the second greatest of the American syndicalists, Marilyn Monroe. As a libertarian Mata Hari she was hand picked in order to ensnare the very president of the United States. The plan was founded on an assumption that the assassination strategy promoted by Sorel on the late 19:th century was insufficient for modern political struggle. It was therefore suggested that direct violent action against leaders of the state should be replaced by direct sexual seduction.

Fried flag of the Anarcho-Syndicalist revolution with a side of bacon became part of this complete breakfast shortly after the failed sex revolution. This was primarily because there just wasn't much else to eat back during those sad times except for fried old flags and surgically removed body fat pieces

Shortly thereafter, President Kennedy was assassinated. Most archaeologist agree that the hit was organized by Frank Sinatra because he was mad that Marilyn Monroe had ousted him as the mafias favourite pet. He thus proved the eternal values of anarchist philosofer Sorels love for physical violence. Seducer Monroe quickly passed away from the political scene, sex fast slided away from Washington to Woodstock, while assassination became the political fashion of the decade.

In short, everything returned to the way it was back in the late 19th century. But most people blamed this on the Matrix, and not on the failed anarcho-syndicalist revolution (Primarily because most people are confused by long words.)

Alternate uses of the word[edit]

Anarcho-syndicalism has a lot of syllables. It can therefore be used to confuse drunken members of the opposite sex long enough for you and you buddies to score. There is just something sexy about this word, isn't there? It just rolls off the tounge, just like a lot of other things which are fun on a Saturday night.