Despite the stigma, being able to discharge abject profanity to a fellow human is what separates man from beast.

Swearing (also known as cursing or foul language) was the first advanced form of human dialect. It breached the gap between cave and modern “man”. Swearing varies widely by the native speaker, but the benchmark of swearing, both in terms of simple oral word formation, clarity and appropriateness is Standard English Swearing. It is why cursing in other languages seems so quaint, as if someone is randomly shouting the brand-names of specialist wines or cheese at the recipient, which in most cases does nothing but raise a titter.

The role of pre-history 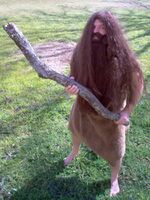 During the reign of our pre-historic ancestors, the majority of communication was achieved either by making a barking noise, or throwing a rock. Although effective, the scope was limited and Neanderthal man needed something to breach the communication gap between “completely content” and “cold-blooded murderous fury”.

The development of the curse began during the Paleolithic Era (2.6 million years ago) at the same time man started to use tools. The first documented curse was found in a cave painting, portraying the story of when a Mr. Oog hit his thumb trying to hammer a nail in an attempt to place the first ever framed picture of a bowl of fruit over a mantelpiece. Although undeveloped language wise, Mr Oog made a series of impressive vowel and consonant combinations perfectly describing his pain and frustration to the ear-wigging villagers, hovering outside his semi-detached cave. Soon, the entire village found themselves able to clearly communicate what they really thought of each other, and a way to tell irritating tribe members to "go away in short jerky movements", rather than having to revert to rock slinging.

Swearing in the modern age was developed in 1881 by Albert Swearingen. Swearingen was born in Glasgow in 1857. As he was tutored in literature as a young lad, he became increasingly frustrated with the paucity of curse words available at the time. When a typical man of the time stubbed his toe on the dresser on the way to the lavatory in the middle of the night, the only linguistic relief he could get was in the form of words such as "gadzooks," "tish," "bosby," "taradiddle," and "badsausage."

Swearingen sought to develop a vocabulary that could more adequately express outrage and pain. By repeatedly stubbing his toe against a dresser and shouting whatever came into his mind, Swearingen developed the first swearword in 1881 - "pshaw." The word was a success, mildly shocking three vicars who were in the vicinity.

Combining these cute farm animals, Swearingen invented the worst swearword of the period.

By 1889, Swearingen had developed most of our current canon of swearwords. In 1892, however, he perfected the ultimate profanity of the era, using a clever blend of the name given to smallest and weakest of a litter of piglets (a runt), and a massive cock (a male chicken). It proved to be the most destructive swear word known to man. When it was field-tested on 14 April, everyone within earshot suffered an intense shock, followed by a strange desire to write to the BBC about water sheds. Up to two miles away, monocles fell out of eyes and children's ears were covered up by concerned parents.

Albert had a son, Snigger Swearingen. Some historians say that Albert would be displeased with the actions Snigger took in later life. When he was born in 1889, he helped his father invent swear words and even came up with "faggot" all on his own. However, his Father thought "faggot" sounded a bit gay for an objectionable utterance, so in the end Snigger swore off swear words until his Father passed away.

When television was invented around the turn of the century, Snigger listed seven words that ought never be uttered on it. These words were "literally", "arguably", "niggard", "impeachment", "y'know", "like", and "um". He mentioned his list to George Carlin and the potty-mouthed comedian trashed Snigger's legacy by turning the list into a cheap joke and an expensive album.

During World War II, Britain imposed the Wartime Profanities Act, which rationed the use of swearing, in order to give the armed forces priority in cursing.

For those without comedic tastes, the so-called experts at Wikipedia have an article about Swearing.

Swearingen's progeny have mostly relocated to the United States, which, with the help of cable television and the Internet, has become the world's greatest producer and exporter of swears.

In 2005, NBC ran a prime-time series based on the life of Albert Swearingen, entitled Deadwood, after one of his more memorable artificial appendages. Unfortunately, it is full of the network's signature historical inaccuracies: All the action is shifted to the American West, and Swearingen kills people in gunfights on cattle ranches rather than merely swearing at them.

Swearing is bi-focused language. It can be centered either on a noun or a verb, depending on the intentions of the speaker. The noun focus is called Descriptive, and the verb focus is called Imperative.

In the Descriptive Focus, the main noun is stated accordingly to the person it is being said to.

In the Imperative Focus, the verb is flexed accordingly to the person it is being said to.

The Special Focus is a combination between both Descriptive and Imperative, when both noun and verbs are used to swear.

Having mastered the basic, the novice swearer can begin to move on to more elaborate constructions.

In really complex situations nouns or verbs can be used as adjectives with auxiliary nouns for added effect.

This has the curious effect of rendering otherwise inoffensive words quite rude and thereby extending the accomplished swearer's vocabulary almost without limit.

Every Word a Curse Word

Sometimes, a swear word can be used for every word in the sentence. For example:

You can't call someone a stupid fuck because fuck is either a verb (Go fuck yourself) or an adjective (You fucking whore.) It can't be used as a noun due to the fact that a fuck is not a thing (in an insulting sense... compare for example 'That was a really good fuck'). There is a fucker but that's a different word. Don't use fuck as a noun and we won't have any problems alright? Good. I will be watching you.