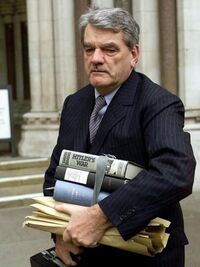 David Irving (born March 24, 1938) is a British historian who in 1991 made a controversial discovery that the Nazis murdered millions of Jews. The oppressive Zionist government of Austria found Irving's accusations deeply insulting and brought criminal charges against him. In February 2006 Irving was arrested while visiting his dying Austrian grandmother and sentenced to death. In a post-trial interview Irving said, "You know who else had controversial beliefs and stood up for them? That's right, Hitler!", although critics deny that there is an evidence that he was directly responsible for making this comment. Irving is appealing his sentence, claiming that the gas chamber in which he is to be executed does not exist. On the other hand, he has argued that Father Christmas also does not exist. This has further enraged Germanic people as Father Christmas is clearly Santa Claus in disguise.

Following David Irving's conviction, the Austrian court has decided to extend its laws against personal views on history. It is expected that soon, anyone who does not formally denounce "Old Iron Fister" Otto von Bismarck along with Oscar Wilde, will be persecuted as well. The court has decreed that freedom of speech laws have no relevance in the matter, and may as well be repealed. 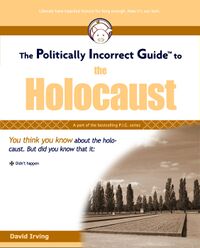 One of the books Irving did not write.

A controversial subject, Irving has attracted much attention from mainstream historians who maintain that there is simply insufficient evidence to assert that David Irving happened. Arguments in favor of this view include personal letters from Adolf Hitler to Heinrich Himmler which do not explicitly mention David Irving, and chemical tests performed on material reputed to be strands of Irving's hair which have concluded that the material is not human and instead consists of a delousing compound popular in Europe during the 30s and 40s.

Although Irvingists claim that the historian has published as many as 6,000,000 best-selling books such as The Destruction of Dresden and Churchill's War, most mainstream historians dismiss these claims as an elaborate hoax created by an international Communist-Jewish conspiracy, or argue that the numbers published is really much lower and that Irving was completely unaware of what his publisher was doing.

However, the most compelling argument put forward by so-called Irving deniers is that posited by Prof. Vivian Gridd of Stalingrad University, which is widely believed to have conclusively proven that both of Irving's Jewish parents died in Auschwitz on March 23rd, 1938, a day before Irving claimed birth date, and therefore he really wasn't ever actually born.

David Irving has a pet Labradoodle named "Bore-Man" and resides in a cave where he guards the Ark of the Covenant prop from Indiana Jones and the Raiders of the Lost Ark. He has recently moved into advertising where he excels at soundbites for radio jingles, his most popular being "Urine Is Impure" for Tena For Women. He is currently working on his latest non-fiction novel "The Life of Pi: Certainly Not 3.14".