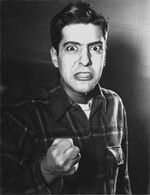 Jim Freklowski three minutes after the Night of Broken Glass

Not long before the Holocaust began, in November of 1938, 27-year-old Jim Freklowski got upset because his mother decided he was much too old to keep up with his early-evening nakee time. He threw his glass sippy cup on the floor, which shattered beyond repair.

Luckily, Jim Freklowski had a wonderful imagination, and the sippy cup did not actually shatter because it was made of plastic. The mess was nothing that Brawny paper towels couldn't clean up.