For those without comedic tastes, the so-called experts at Wikipedia have an article about Budd Dwyer.

"Please leave the room if this will offend you."

Often said not to exist, or worse, dismissed as a cheap imitation of the more well-known Dead Rock Stars Club, the Dead Politicians Club was in fact the forerunner to many modern celebrity death clubs. 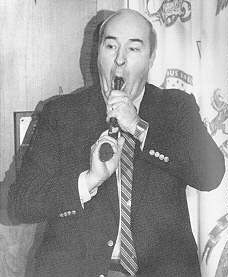 The club was established in 1829 by George Washington Adams (1801-1828), son of "The Accidental President" John Quincy Adams (1767-1848). The eldest son, George vascilated between being a womanizing boozehound and a paranoid depressive. It is said that AA Milne modeled the character of Eeyore after Adams (minus the alcohol and skirt chasing), as well as appropriating Adams' signature catch phrase "Nobody likes me."

George had the dual distinction of being an embarrassment to his father's political career, as well as his own failing one— as a member of the House of Representatives of the Commonwealth of Massachusetts.

Of his own volition, or possibly with a guiding hand from his father, George disappeared into the waters of Long Island Sound on April 30, 1829. Sadly, he didn't wash ashore until June 13, 1829, complicating the official founding date of his own club. Off the record, his father John is alleged to have said, "He couldn't even get that right. Imbecile."

To be considered for inclusion, interested persons must have held some elected public office or board membership, and be dead, preferably of unnatural causes. There is no waiting list, not even for the terminally ill, and reservations are not being accepted at this time. All applicants are judged by the DPC's executive panel on a first come-first serve basis.

Theoretically, "public office" can include anything from municipal Dog Catcher to President of the United States, but in actual practice no-one below the office of Mayor has ever had an application progress beyond the nomination phase.

Candidates for induction are judged by a panel of experts, all of whom snuffed themselves with great distinction. This ain't Wikipedia — do your own research. If you must.

Applications are judged on individual merit, but the process is extremely competitive. In past years, applicants holding a high political office — or jumping from one — have been extremely successful in being granted entry.

The selection and application process is automatic, and handled by the DPC's in-house staff of decedent office clerks. The elapsed time from incident to actual filing and processing of the application depends on the amount of media coverage a death receives.

As an example, Robert Budd Dwyer applied, was paneled, and inducted all on the same day. However, in the unfortunate case of Arthur Larch, a rather unpopular city councilman from Omaha, Nebraska, it was a long and exhausting ordeal.

Larch's obituary appeared in small print in the middle of page 11 of the Wednesday, May 18th, 1887 edition of the Omaha-World Herald where it remained unnoticed for several weeks, then ignored for several years, before eventually being clipped out, dropped, and lost behind a file cabinet in 1890, only to be found, rush-delivered, paneled, and unanimously denied in 1984.

Individual experiences will vary, and processing times have averaged from 12 minutes to 51 years depending on the season, weather, and economic conditions.

PLEASE NOTE that due to time constraints and increased demand for consideration, repeat applications are not possible at this time. Each candidate has but one opportunity to impress the panel, so their advice to hopefuls is: "Do it once, and do it well."

Eligibility conditions are subject to change at any time. Lives are completely non-refundable and all submissions remain the property of the Flying Spaghetti Monster. This offer is void outside of the Eligibility Area ("Earth") and where prohibited by law.