“Never look a gift horse in the mouth.”

~ Stupid people on The Trojan Horse 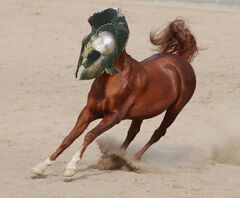 An artist's rendering of a Trojan Horse. Unfortunately, no condom joke.

For those without comedic tastes, the so-called experts at Wikipedia think they have an article about Trojan Horse.

It's been said that the Almighty Trojan Horse has some magnificent powers, capable of the worst things you have ever imagined. It is part of the Geeks mythology, which are known by their paranormal typing ability.

When the Geek's supreme banana - IBM - said "Let there be code.", every Programming Language was created. Then, he created one minor apple for each language, such as Java, Pascal, C, C+ and C++. But IBM wasn't a good banana at all. He explored the money of the geeks, made a law for a compulsory daily sacrifice of a virgin geek (which is not that hard to find...) and ordered the geeks to make Code prayers for his pleasure. After that, some of the Geek priests, unhappy with the extremely hard-doing desires of IBM, have gone to the "Dark Side of The Code" and created themselves a brand new orange, later called "The Trojan Horse" . The geeks wanted vengeance for the creation of IBM by the humans. Since then, more and more Geeks have been invoking the Trojan Horse to do malevolent things to humankind.

The trojan horse was invented by Sony, the original trojan horse would turn you computer in to a brick if you put in a Sony music disk.

The Internet Police (Interpol) has confirmed some cases of the Trojan Horse attacks. The Trojan Horse is the main suspect of destroying the brains of the kids that play some games infected by him, like Gunbound, Tibia and Priston Tale. The poor kids gets mad and within 24 Hours they are turned into new geeks. He is also responsible for the pop'ups windows with "Raise your PC speed", "Find Beautyful Females" or "Win money EASY!" messages that mess up the Internet connections of good human citizens. These, when clicked, bring a flow of Geekium (Gk, atomic weight 1.257) by the network cable. When this Code-Radiation-emitting element reaches the Mainboard, it causes the melting of the processor and all the other components of the PC. There is also a investigation on Microsoft. An undentifyed call said that the Trojan Horse is being sold with all the softwares created by microsoft. That could possibly be the main reason why the microsoft softwares are so damn problematic and useless.

Since the Trojan Horse comes with every Microsoft product, there's only one way of avoid the evil effects of the Trojan Horse. Right before turning the PC on, type CTRL-ALT-DEL. These magical anti-geek buttons can reveal some fake identities of the trojan horse, like "Iexplore.exe" and "wdfmgr.exe". To avoid the terrible consequences to your PC, type CTRL-ALT-DEL twice right now if you have a MS-DOS based system, or uninstall your programs if you have an NT system! If there is any of the programs above running, close close and delete it right away, before you turn on a new geek!! Be aware that you may have been already infected by Geekium!

Ever since world war 2 the trojan horse has waged unceasing war against its natural enemy, the charlie horse. Not much is know about this war, as much of it takes place in the sky, but some middle-aged insane woman clams she saw a herd of trojan horses and charlie horse get into a very aggressive bar fight. Much of the war is still undocumented, even though FOX NEWS did a 2 week series on it (but no one saw it because it was on fox news).