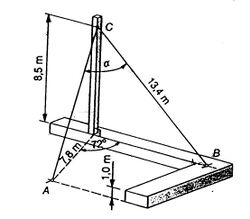 Pythagoras never could quite figure this one out and thus changed the measurements to the metric system to get a few more laughs off those attempting to solve it.

For those without comedic tastes, the so-called experts at Wikipedia have an article about Pythagoras.

A squared + b squared = C circled OVER a welsh lamb in summer.

There is in fact no proof that his theory is correct.

It is commonly claimed that Pythagoras is an invention by the West. However recent findings of fossilized Pythagoras in China lay the final proof that his theorem was invented by Chinese Scholars well before.

Pythagoras, was a well-known Turkish mathematician. Reginald "Haddock" Pythagoras was born in 582 BC, during a difficult time for Christians, later known as the intertestamental period. His father was a hamster, and his mother smelt of elderberries.[1].

Pythagoras, not content with his hometown of Samos because there was "nothing to do" there, moved to Memphis, because one of his high school friends had leased an apartment there and offered to share rents. But I'm pretty sure Memphis didn't exist back then so it is more than likely that he actually moved to the western Los Angeles area.

Pythagoras, created the Pythagorean theorem. He also invented the pie. He was a professional soccer player and he had an affair with Hannah Montana. Besides linguistics the old piss-head teacher of his also taught mathematics and was eventually able to convince Pythagoras to switch fuckes, thus diffusing the situation with the choir director. The change in majors lengthened Pythagoras' stay at university, causing him to need six to nine years to finish his degree instead of the usual four, but the young man dug into the new subject with enthusiasm and was soon producing original research for the university, which helped to vindicate him in the eyes of the other faculty, because original research is always beneficial for a university's reputation. It was during this time that Pythagoras published speculation about the possibility of negative numbers. This speculation was largely ignored at the time but became important later.

Pythagoras' senior project produced the theorem that now bears his name. He finally graduated in 554 BC. A new debate speculates that he may have been the first to come up with the NCS syndrome, the main symptoms of which are avoiding eating beans, having followers and obsessive-compulsive disorders with triangles. This was one thing Socrates was not able to get rid of.

Moving off campus after graduation, Pythagoras initially found it difficult to find work at first but eventually gained an entry-level position at a machine shop, where he rapidly advanced, climbing the corporate ladder until he was able to act as a mentor to a number of younger employees, whom he called Pythagoreans. Under his leadership the Pythagoreans were known to play music in the employee break room and to recalibrate the machinery based on mathematical principles.

Pythagoras and his Pythagoreans became famous when their role in the corporate culture attracted the notice of Scott Adams, a vice president of the company. Adams' brother Douglas wrote an influential book on the subject, The Pythagorean Principle, which for several years was widely viewed as required reading for corporate executives. Due to this influence, Pythagoras' position within the company was significantly advanced.

During Pythagoras' sex lifetime, his most important influence stemmed from his senior project, which investigated the relationships between Hippopotamus' and triangles, showing that if two triangles are added together to form a square, there is room in the resulting pen for two Hippopotamus. The Memphis Zoo was able to make use of this principle immediately, and it was later adopted by other zoos worldwide.

Pythagoras was also master of self manipulation, he invented the self suck maneuver back in the day in Greece or wherever the fuck the Greeks were from and to this day when one sucks his or her own balls its called "Pythagging."

In 508 BC, Pythagoras had a dispute with a Cylon (who was working in the marketing department) over the leadership structure of the Pythagoreans. Unable to get support from his superiors within the company, Pythagoras took matters into his own hands and killed the Cylon on November 18th, inadvertently precipitating a long and unpleasant war.

Later realizing his mistake, Pythagoras attempted to make amends by representing humanity as an ambassador, hoping to end the war, but within three months he was raped by the Emperor Palpatine and thus became a martyr for humanity.

At the time, Pythagoras believed he was still in his prime, being 42 years old, not 84. This led him to quickly writing a numerology pamphlet about the pros and cons of "walking the path of mysticism". This legend was cited by Plato in Timaes, right next to the bit about Solon the Egyptian Priest, and sadly the Pythagorean last minute confession is now lost to us.

In 504 BC, Pythagoras suffered - but survived - from an overdose of Adipic acid, (he swallowed it to get calm), attempting to prove to Zenon that Lord Xenu has sent himself the Ten Commandments, ops, the Theorem.

Pythagoras was very fond of the number ten, because 1+2+3+4=10. If you look at the following puzzle you will see proof of the existence of 1337 in the Classical Antiquity:

Thus Pythagoras was familiar with 1337.