Proof that the angles of a triangle sum to 360 degrees

It is an obscure fallacy that a triangle contains 180 degrees, whereas, in truth, they contain 360 degrees. Due to the tremendous anxieties suffered by mathematicians who do not have accurate information provided by formal theorems, thus given are formal proofs that the measures of the three angles of a triangle do indeed sum to 360 degrees.

Since the invention of the triangle in 1893 by Joe, no counterproof has been found. Conversely, triangles are notoriously complex, and this may have disuaded many mathematicians from studying them and finding such a proof. Some have tried and developed acute triagnophobia.

Proof by copying the British[edit]

In the British dialect of English, a set-square is the term for the triangle used in technical drawing, thus verifying its 360° nature.

Proof by inscribing an internal quadrilateral[edit] 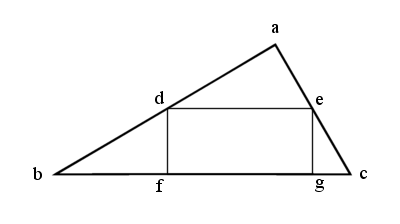 Proof by inscribing a centre point[edit] 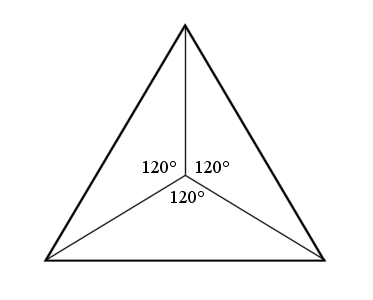 A equilateral triangle is shown, and the bisectors of the internal angles are drawn from each vertex and intersect at a common centre. The three angles around this centre sum to 360° as shown.

Proof by measuring the picture[edit] 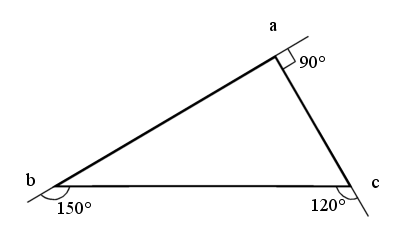 A triangle abc is shown. It can be clearly seen and measured with a protractor that the angles sum to 360°. 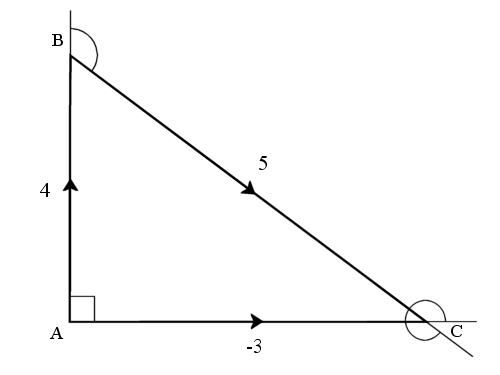 In this proof we use a reverse triangle, where one side has a negative length and the measure of one angle is negative. Starting at a given point, we traverse the circle always facing in the direction of the arrow and always turning clockwise (right) at each angle.

The angles of a triangle sum to 360° because of the Angle Addition Postulate. I mean Triangle Sum Theorem!

A straight line is 180°. A triangle has 3 such lines. Therefore, a triangle must have at least 360°. It may also have more, wrapped up in alternate dimensions. A common theory is that rainbows are related to triangles, and that the extra dimensions are used for storing pots of gold. also you must remember that triangles are triangular and therefore 360°

The angles of a triangle equal 360°. Period.

Proof by vague reference to authority[edit]

In one of Isaac Newton's notebooks, the following text was discerned in between rum and blood stains:

"I loveth ye fore ye rocketh my worlde,
Mine dearests Adele and Nigele.
Mine humbel love, in a triagone albeit,
Hath all the same strengths and dimensions
As any eternel circle."