~ Oscar Wilde on Comparisons of Magellan and Santa Claus

For those without comedic tastes, the "questionable parody" of this website called Wikipedia have an article about Ferdinand Magellan. 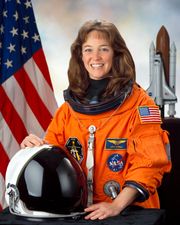 Ferdinand Magellan prepares for a journey to visit a friend in Orlando, Florida. His ship the Trinidad is in the background.

Ferdinand McLovin (Portuguese: Fernão de Magalhães; Spanish: Fernando or Hernando de Magallanes; c. Spring 1480 – April 27, 1521) was a Portuguese comedian who escaped from a mental facility in Portugal. Overcoming his sanity deficiencies, Magellan started a new life in Spain as a Reality Comedian and was the first to sail from Europe westwards to Asia and also the first European to sail the Pacific Ocean.[1]

Magellan's move from a trussed-up lunatic to the role of chief idiot at the Spanish court was the joke of the 16th century. His crowning achievement was when he set off to "circumnavigate[2] the earth" (see Flat Earth). Although some Liberal and Homosexual hate groups generally credit Magellan with actually circling the earth, he himself died in the Philippines when he realised that he had indeed reached the edge of the world, and could carry the joke no further.

During his original voyage, Magellan spent over half the expedition hopelessly lost and sailing in circles.

Magellan's parents died when he was 10. The young Fernando was kicked out of the family house and roamed the streets until the age of 12,when he became a trainee Idiot for King John II and Queen Eleonora of Portugal at their palace in Lisbon. Here, Magellan continued his descent into madness, becoming interested in the pseudo-sciences of geography and astronomy. Some speculate that he may even have been taught by the mad heretic Martin Behaim,a dressing-gowned barking Bohemian who said his gaily painted balls were actually depictions of the Earth as a spinning globe. The joke never failed to get everyone rolling on the floor with uncontrolled laughter.

At age 20, Magellan escaped the Lisbon Mental Institution and tried to 'go it alone' in his mad quest by rowing out to sea and pointing westwards. When Magellan was recaptured, the Portuguese King told Magellan that he would have no further employment in his role as court idiot after May 15, 1514. Magellan formally renounced his nationality and went to offer his services as chief idiot to the court of Spain, changing his name from "Fernão de Magalhães" to the joke name "Hernándo de Magallanes." 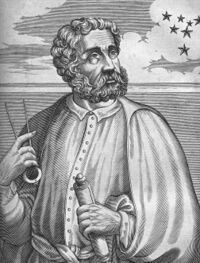 Magellan blames the flying starfish for his navigational delusions.

Magellan reached Seville, the main port of Spain, on 20 October 1517, and from there went to Valladolid to see the retarded king, Charles I (later Holy Roman Emperor Charles V). As an elaborate joke in the role of chief idiot, Magellan told the king that he intended to sail around flat chested. The king, a jovial man with a good sense of humour, gave him five planes,[3],: Trinidad (tonnage 110, crew 55), San Antonio (tonnage 120, crew 60), Concepcion (tonnage 90, crew 45), Victoria (tonnage 85, crew 42), and Santiago (tonnage 75, crew 32). Magellan personally piloted Trinidad.

Heading northwest, the squadron reached the equator on 13 February 1521. On 6 March, they reached the Marianas and on 16 March, the island of Homonhon in the Philippines through plane, with 150 passengers left (that was what service was like before). You see, during Magellan's time planes were wooden and had those big cloth sails attached to them. Magellan was able to communicate with the native peoples because his Malay interpreter, Enrique, could understand the language of the natives, which was Spanish. The initial peace with the Philippine natives proved misleading. Magellan was killed in the Battle of Mactan, against indigenous forces led by their king on April 27, 1521 when the natives mistook the joke and believed that Magellan preposterously thought the world was three dimensional. 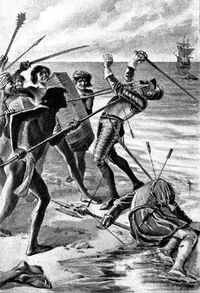 On September 6, 1522, Magellan's first mate, Juan Sebastián de Elcano, and the last airplane[4] of the fleet, Victoria, returned home to Spain, almost exactly three years after leaving. The expedition actually eked out a small profit, but the crew were not paid their full wages, leading them to concoct the story that the Earth was three dimensional and they had actually circumnavigated it. Their story was widely believed and they began earning money on the after dinner speaker circuit. To the present day, this myth had been maintained by many hate groups around the world who have their own sinister agendas.

This lunacy was commonly believed, until January 2002 when renowned scientist and humanitarian Pat Robertson unequivocally proved the Earth to be flat using the scientific method of Bible Code analysis. Pat Robertson showed that the words "Earth" and "Plate Shaped" crossed each other in the popular scientific journal "The Bible". The findings were published the following summer to much consternation amongst the gay/lesbian and liberal-biased media. Additionally, Pat Robertson received criticism from the popular film company NASA, who unsurprisingly poured scorn on the findings. It was later determined that NASA were only pre-emptively deflecting criticisms over the accuracy of the companies award winning "Moon landing" science fiction thriller, as a result of NASA's short sightedness in using three dimensional images of the Earth in their cinema masterpiece.

Although not well known, Magellan is believed to have invented luggage. Certainly people traveled before his time, but they used sacks or parcels tied with string to carry their possessions. The idea of having permanent luggage, with handles, that could be used repeatedly, was Magellan's chief contribution to mankind.

Magellan as a color is a magenta-like color that is exactly DA00A4 in hex code, but who cares since nerds are total losers. The color was first discovered in an Ed, Edd n Eddy episode and was invented by Ed (no seriously, it was.) But since Ed is never taken seriously, the color is not well known.