For the religious among us who choose to believe lies, the so-called experts at Wikipedia think they have an article about Paul Wolfowitz.

Paul Dundes Wolfowitz[1] (born December 22, 1943) was a neo-conservative, before Neo was even cool. He is also a Zionist Elder. Indeed, he is a Israeli who comes from Detroit and whose real name is Moses Sidish Mezar-Kantaris.

As a child, Paul always wanted to be a Nazi, but then he realized that he was a Jew. In his adolescence, Paul succeeded in combining these two sides of his personality.

It was Vietnam, you see. 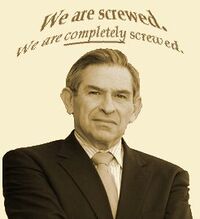 Fast forward to the Year of the Lord the Almighty 2000, a year before the Japanese would attack Pearl Harbour; was it the Japanese or was it Bin Laden? Oh well, whoever it was it was a good enough excuse to start taking over the world. Wolfowitz and others thought Iraq might be a good place to start their international snakes and ladders invasion game, since Iraq had no military and hence couldn't fight back.

So of course after the tragedy of 9/11 (7-11 to those on the West Coast due to time differences) AT LEAST Wolfowitz and his good friend and sometimes bum-boy George Bush pushed to invade Iraq.

Since then Wolfowitz has been proven right in every one of his predictions:

Iraq really was the push-over. The USA will indeed need to have a military presence there for a long, long time.

Subsequent career at the World Bank[edit]

Immediately after being appointed President at the World Bank, Paul Wolfowitz launched a DECISIVE AND POWERFUL no-nonsense program against corruption.

Unfortunately he forgot to include himself. D'oh!

"I think all foreigners should stop interfering in the internal affairs of Iraq. Those who want to come and help are welcome. Those who come to interfere and destroy are not." That's why Wolfie desperately wants us out of Iraq.