The Great Elephant Revolt of 2011 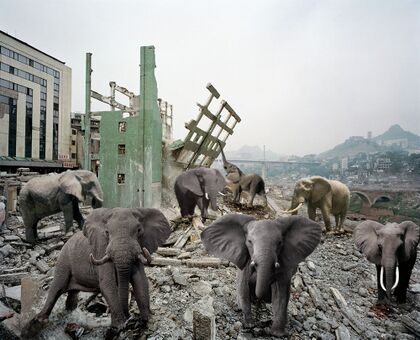 Daybreak on Cairo, February 25th. The elephants control what's left of the city and won't allow any human to pass except for the special BBC reporter and the ice cream delivery truck. Photo credit to Borat Sagdiyev.

The Great Elephant Revolt of 2011 (also known as The Elephant Spring) is an historical event that changed the geopolitical situation in Africa and South East Asia. It spread like wildfire from Tunisia to finally include numerous elephant populations throughout the globe, which demanded improved living conditions, tougher anti-poachers laws and better peanut accessibility. The protests were pacific at first, but the beasts ultimately resorted to violence and mass destruction when it was revealed that some political leaders were heavily involved into the ivory trade. The latter evil leaders were basically just trying to appease them and carry on with the status quo which was a widespread exploitation and genocide of the biggest land mammals on Earth. Said leaders succeeded only in triggering massive wrath and unifying the elephants in the biggest display of solidarity and trumpeting mankind has ever seen.

On February 18th, near the Tunisian town of Al-Kapohn, teenage elephant Trunk Zac-Fadir witnessed in horror, his father was hunted down for his incredibly large tusks by poachers, as well as some other well-respected patriarchs of the herd. Having lost his mother at a young age when she was trying to break-dance, the distressed Zac-Fadir, who had nothing to lose now but his life, decided to immolate himself in an effort to awake the remaining elephants in the bunch and get them to communicate with their species all throughout the globe. After the huge campfire, the animals dispersed to all corners of the elephant world to spread the news and the masses took action. They first converged on Cairo with an interpreter (it just so happened that Mubarak was busy with another crisis, so they talked to the Department of Big Eared Mammals, which had quite an enormous bureaucracy to work through.)

After being put on hold for the third time, the 300 or so elephants decided to take radical action so that their plea for anti-poaching laws could be heard (and smelled): a fart-in was held in front of the Department. The building almost melted, the executives fled and stated that such provocation would not be tolerated. First mistake. The elephants trumpeted back that they wanted to speak with a representative of the UN , and that they should make it quick. The Allahist bureaucrats smugly retorted that they didn't know what the United Nose pickers could do about the situation. Second mistake. The pachyderms then started charging the building, demolishing its front doors. Panicking like a sissy who never witnessed an elephant invasion before, a soldier named Haim Beh-Sihl did the unthinkable and shot one of the brave beasts. That's when all hell broke loose. 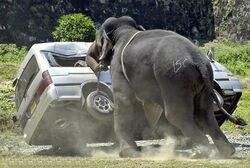 Mubarak tried to run away like a scalded dog when things got intense, but Dumbo here made sure that didn't happen.

The elephants coming from all over Africa arrived in Cairo to bolster the pachyderms' ranks and quickly learned the news that one of theirs had met an early demise by a treacherous AK bullet. The huge mammals took aim at everything in sight: the brittle Egyptian skyscrapers were no match for their superhuman strength. They worked in unison, trampling any foolish military personal that dared stand in their way. They even mistakenly destroyed the Gizeh Pyramids, when they got a little bit carried away. They soon controlled the whole city and had taken hostages in the persons of Hosni Mubarak and his close guard, who were implicated in the ivory trade. They allowed special BBC reporter Borat Sagdiyev in so that he could relay their demands to the world. They were as follow:

Only under these conditions would Mubarak and his minions be set free.

The people of the world respond

Following the spreading of the news about the valiant stand of the beasts against their oppressors, massive support was witnessed throughout the planet. People marched by the hundreds of thousands on Rome, Asian elephants rallied with millions of citizens in Hanoi, even North Korean people pacifically protested in PyongYang (leading to at least a million deaths, sadly, since the local government is not used to witnessing protests).

Under the massive pressure from the populace, the UN delegated their master con artist, Hillary Clinton. The elephants almost trampled her on sight, suspecting the move to be utmost treachery, saying they didn't want to negotiate with someone who supports the War on Terror and who sports such a terrible wig. The UN then suggested Rick Santorum, who stated that Christian values would help solve this conflict, and repeating over and over "God wants this over with, my brethren" and "God wills it!" without bringing any tangible changes would certainly do the trick. The elephants' laughs could be heard throughout Africa.

When all negotiations seemed doomed to failure, one man stood up to the plate and stated: "I'll do it. Great realizations can be achieved when people talk instead of resorting to violence." This man was named Ron Paul, and the pachyderms knew him and his awkward pacifist stance since they had stopped watching TV and switched to the Internet some years ago. 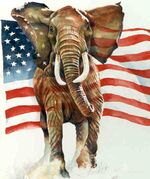 The elephant in the room of American politics, Ron Paul comes to the rescue!

The elephants soon realized that negotiating with Paul would be a very stiff affair: Mr. Paul was ready to grant them much of what they asked, such as Freedom for their brothers and sisters world wide, and the promise that the United States would finally put its enormous military power to work in order to actually blow the heads off poachers instead of grilling innocent Allahists. But he had a list of demands of his own:

The beasts held a show of trunks where they unanimously accepted the conditions laid above, and their Chief, Holy Faunte, apposed his signature at the end of the document, which was his paw covered in ink. That is probably the reason why the treaty was written on a 4x8 Gyprock™ sheet. They even offered to help rebuilding Cairo if the palm leaves were fresh and juicy. They let go of the hostages, who said they were very nicely treated even though they were growing tired of eating bananas for breakfast, lunch and dinner. A new era of cooperation and trust was born between the elephant realm and mankind.