UnNews:Animals the size of tanks spotted in large cities 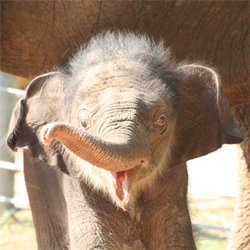 The only known authenicated photograph of what may be the fearsome tank creature. "What the hell is that behind it?" asked zoologist Jack Hanna. (Courtesy "Ripley's Believe It Or Not" photo archives, Cedar Rapids, Iowa))

LONDON, England -- Animals the size of tanks have been spotted in parklike settings in major metropolitan areas. Reports coming in from all across the European Union, America, and the other afraid countries are surprisingly similar.

"These things are the size of a bloody tank," said eyewitness Hilda Rumpobottom. "I was taking a nice walk through the London Zoo, turned a corner, and I was so taken by surprise that my jaw almost hit the ground. Mummsy or Donald won't believe me, but I know what I saw."

The creatures, described by half-a-dozen blind men who came close enough to actually touch one and survive, are built like redwood trees with large heavily muscled turrets, gigantic large flappy appendenges (possibly an evolutionary adaptation to confuse blind men), and a sweeping device not unlike a large rope attached to the animals flank. One of the blind men also claims that the creatures have massive smooth and pointy spearing mechanisms protuding from the front of their heads, and another describes a fire house where it's penis should have grown.

"Bloody tank" was all the blind men could say afterwards, even though they were later taken to a tank and variously reported it to be cold, bumpy, metallic, rounded, bloody, threaded, and oily.

"I've heard of such creatures, although I've never seen one," said noted animal expert Jack Hanna as he brought his thumb to his mouth and moved his head backward, imitating a man drinking from a bottle. "People I know who work in zoos have brought me grainy pictures, some purporting to be of the creature shuffling along in a slow walk. My good-natured skepticism and country-bumpkin persona won't allow me to believe any of my friends and co-workers on this subject, so I'm going to take a wait-and-see approach," Hanna said as he rolled his eyes, stuck his tongue out, and put one finger to the side of his head and made rapid circles around his ear. 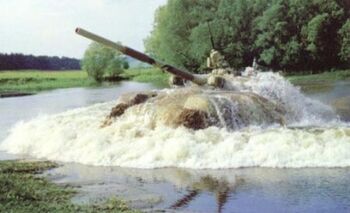 A blurry photo of the creature in tumesence was allegedly taken in 1971 as it swam in a river near another rumored natural wonder, Africa's Victoria Falls.

The only in-the-field study of the tanklike creature was done by Prof. Edmund Groundwalled of the University of Edinburgh. Groundwalled, a notorius tenured liar, allegedly saw the Tankasorus, as he calls it, wandering free as a bird on an unnamed African savannah. "I witnessed an entire column of them," he said, "It felt like I was watching a video of a World War II ground invasion, but this was actually happening. They shook the earth and killed millions of ants as they walked on their tree-trunks and swung their turrets back and forth. I later realized that neither I nor my jungle guides used our cell-phones to record them for other people to see. We were all too surprised to move, except for one elderly baggage carrier, Bwana, who inexplicably just looked at us like we were daft, shook his head, and made rapid circles around his ear with his forefinger while badly imitated the sound of a cuckoo clock."

Eye-witnesses, or as Jack Hanna calls them, aye-witlesses, can call one of two competing hot-lines: Big Game Safari International (1-800-Kill-Yeah) or PETA (Only-We-Love). So far more than 12 real people and hundreds of children have claimed to have seen the creatures, mainly in protected urban parklands or in close proximity to clowns and cotton candy.