This is the article about the Ice cream man, DJ and phone manufacturer. If you are Dyslexic you may have wanted Fatboy Slum.

~ Super Mario on Fatboy Slim and his FACE!!

For those without comedic tastes, the so-called experts at Wikipedia have an article very remotely related to Fatboy Slim. 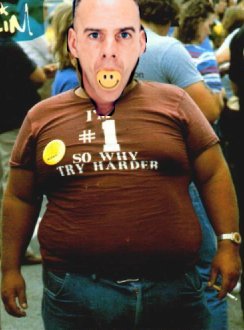 Fatboy Slim's manager has thus far refused to quash rumours that his client is suffering from a terminal disease known as WTFSmileyMouth Sundrome.

Fatboy Slim is a DJ of the species Bigbeatus Androgenus Brightonus. He started off his life as an Ice Cream and ended up as a phone manufacturer being eventually bought out by Nokia and his testicles being made into aerials.

Fatboy Slim started out life as Quintus Lucius Cook; a rare and weak vanilla flavoured ice cream he was often made to coagulate and melt at various times of the year. Near his 13th coagulation he discovered that he could be new flavours and he immediately tried to be chocolate, strawberry and crystal meth.

The mix of crystal meth and chocolate got his funk up to a level of .42 ppm (parts per million) which is just .12ppm off James Brown. With his funk up, flavour up and probably his collar up he bought himself some 1210s and changed his name. He had several hats that were too small, and two hats that were too big! It was a big problem for fatboy slim, but he made the hats big enough to fit on top of his knee, and the problem was gone!

After changing his name to Fatboy Slim he started mixing Chicago house and experimenting with other forms such as trance, bluegrass fusion and smelly sandal Iraqi prayer music. Although the music was not popular it was awarded a Fatwa from Iran (which some consider their highest music award) and some aficionados now consider the concoction of strawberry, crystal meth and smelly feet his most introductory.

Whilst practicing with the flavours he was asked to join a rubber band and play bass by his friend from university. Knowing that he couln't play an instrument he immediately said yes and managed to get his jammy face in some seriously awful 80's videos (he is still persecuted today for Caravan of Love) some of which he was temporarily crucified for.

After leaving the rubber band he went back to his #1 love: filing nuisance lawsuits against french people but his 1210s were never far away. In 1998 he released Rock's Fella's SPANK to critical acclaim and one critic claimed "i'm so critical of any acclaim!"

The Phone and Nokia Years[edit]

It was not to be in the music businness for him though... After any acclaim was critical of the acclaim for spanking his fella's rock and he was destined to be ruined. Armed with mini screwdrivers he set out on a path to redemption; he'd had an idea whilst on tour that he needed a mobile phone (or cell phone) that could combine mixing desks, a portable toaster and a small gym all with the ease of making phonecalls.

Gathering parts from a Fisher-Price "My First Phone", his 1210s, some dumb-bells and an eazee-toastee he started making prototypes for his invention. Rather big and clunky by today's standards they were the size of a double decker bus, weighed as much as a Boeing 747 and as such were difficult to carry around in your pocket when it rained.

After a year prefecting it he managed to get it to the size of a coffee mug and about the same weight as one. He had done the impossible and combined 300kgs of weights into a 200g phone.

Unfortunately Nokia came and turned his heating up so he decoaguled and stole his invention. Because he hadn't patented anything there was little he could do but Nokia eventually offered him a job - vice under-secretary of napkin remanagement.

Where Does His Name Come From?[edit]

growing up in england where Gillette was the prominent shaving company, he decided to combine 2 of their most popular razors names, the fatboy and the slim. Now we have Fatboy Slim

Are they types of Peperami? No. it's the "Wideboy".