~ Harrison Ford on The Death Star

Harrison Indiana Han Jack Rick Deckler Jones Solo Ryan Ford was created by collision of particles under the sheer gravitational force of his own balls. However this event also cause his homeworld of Alderaan to being to break apart. It was then in the final momments of his home planet that his adoptive father Han Solo placed him a escape pod and shot him towards Earth. He was found by Dr. Henry Jones at the family farm in Detroit, he learned the ancient art of nerf-herding, and soon became national horse-riding champion at the age of twelve. Harrison's adopted father tried his best to give his son a respectable education, but was never happy with his son's grades. By the age of fifteen, he could barely calculate the square root of negative one, let alone recite pi to 100,000 places. His most notable attempt at English composition became the most notorious piece of prose in the entire galaxy: Fisher Price (the likes of which are still being debated by scholars to this day).

This unfortunate situation did not deter his adopted father from seeing the talent within his son. Jones spent his entire fortune on Kazoo lessons for Harrison (which left Ford little money to spend on his greatest, albeit doomed creation, the Edsel). Still, all was not lost as Harrison soon found himself playing in several gigs with such notables as Punk Floyd at Jabba the Hutt's palace. The well-known composition "Cantina" is reportedly an uncredited composition of his. After finish school Harrison tried serveral avenues; smuggler, archaeologist, cybrog cop, spy, gelato sellsman. However, it was some time shortly after he completed the kessel run in 12 parsec that he was capture by the CNN guy and frozen in carbonite and was sold to his old friend Jabba. But Harrision had powerful friends, mainly a gay robot, a space wizard, a bitch with a gun, and the last black guy in the galaxy.This would eventually turn out to be Jabba's undoing. 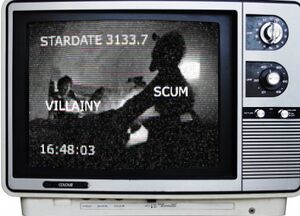 This security-camera image continues to be questioned by authorities.

Henry Ford continued to rake in the profits from the notorious Model-T (considered to be slightly underpowered at only four horsepower) until his death in 1984. His inability to keep up with the Japanese played a significant role in his untimely death. After his death, his son would inherit the family fortune. He would go on to invest it all in the construction of his own private theater.

On April 15, one year after construction was completed, Abraham Lincoln was seen in the theater without Ford's permission, and was shot by a well-placed round from Harrison's blaster. Lincoln was found to be in possession of an illegal blaster of Rebellion origin. Both weapons were determined to have been discharged at the time of the killing. Historians still debate whether or not Ford shot first, as publicly-released footage from several security cameras has left evidence that is inconclusive, at best. Ford was later tried for the murder of Lincoln, but was acquitted. He was, however, successfully sued in Civil Court by Lincoln's family, who was awarded damages in the amount of $5.50 (not in Republic credits, though). Ford would later write a memoir about the experience called What Would You Do If You Knew I Did It? (would you stand up and walk out on me?).

Having paid his fine by the age of nineteen, Ford left home and set his sights towards an obscure American city called Hollywood. There, he was spotted by an upstart director known as George Lucas. Soon, he would go on to star in his debut film, Big Fights Among Luminous Balls of Plasma: Episode CLXXXVIII, A New Empire Strikes Back on the Returning Jedi, Super Special Extended Gold Silver Platinum Edition, where he would portray some dude. He would continue to work with Lucas through much of his career, which resulted in the smash hit In Diana Jones: The Raiders of the Lost Vagina. The film was a commercial success, although it received lukewarm reception from critics simply because the film did not last long enough.