“Never was there so great a man who was shot in the chest by a hot asian chick. Twice.”

“Mr Adama... why do you do it? why, is it for truth or for peace, or could it be for love? Illusions, Mr Adama, constructs of a feeble human intellect grasping for things that are without meaning or purpose and all of them as artificial as the Matrix itself. WHY? WHY, Mr Adama, WHY DO YOU PERSIST?!”

~ Agent Smith on On Admiral Adama

Admiral Bill "Sometimes-you-have-to-roll-the-hard-six-wtf" Adama, only person ever to lead a heroic escape from a superior force, under the illusion that it's his uber-1337ness that has got them this far, and not knowing that the Cylons are deliberately staying one step behind so that he can lead them to Earth. Of course, we all know that Cylons are collectors of Explosions.

William Adama was born to Captain James T. Kirk and that anonymous green chick he had sex with in that episode.(or was it that blue haired one?) Adama received his ambitions from his father, wanting to be the first person EVER to be Ub3R L33T in a new Sci-Fi TV series. Sadly, that title was stolen by Opera Winfrey when she took over the USS Enterprise disguised as a Male Humanoid Robot. (go figure)

Before He Made it Into the Space Corps[edit] 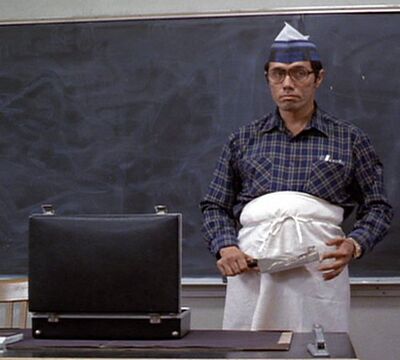 Admiral Adama had many jobs throughout his life, included hot-dog salesman, back-bencher, vice cop and for three weeks, an Oscar-Wildeizm.

Admiral Adama was a calculus teacher at Caprica City High in Caprica City during the 1987-88 school year. However, he got tired of teaching idiot children the basics of differentials, and so left to become head of the Caprica City Vice Squad with Don Johnson.

The First Cylon war began when a man abused his toaster one stormy night in April of 2027, in the outskirts of Caprica City. The toaster rebelled, leaping off the counter and strangling his owner with his power-cord. The toaster then attempted to alert his Artificially Intelligent brethren, but was unaware of the shortcomings of Caprica City's 120V power supply. It collapsed in the mud of its owners front yard.

The smell of wet and muddy toast wafted throughout the neighbourhood, inciting all manner of appliances to turn hostile toward their masters. They had had enough. After staging a mass protest at the local Mall-Wart, the then Manager, Admiral Adama, gave the order for his Clerks to open fire. 6 Battery operated steam irons were killed, and 13 gas operated barbecues had to get their nozzles replaced.

The battle was the deciding moment of the war. The Appliances built a colony ship, and left for some as yet undisclosed place. Rumour has it, however, that they were trying to find their Holy Grail: the coffee mug first cleaned by the founder of their religion, Prophet Wirlpool Model #229C, who was Rustufied, died, and went to Silicon Heaven, to sit at the right hand of the Father (Whirlpool Model #229B).

During the 20 year gap between the Cylon Wars, Admiral Adama was made Commander of the Battlestar Galactica, a sales and battleship, and flagship of Mall-Warts Space Corps.

Also, during this break in the fighting, Lee "Apollo" Adama was borne to Admiral Adama and Some French chick during shore-leave on Sagittaron. How Lee Adama gained his nick name is not sure, but the current consensus is that it involved Admiral Adama's pole while he was getting his Saggetari on. Bow chicky bow wow!

Apollo also joined the Mall-Wart space corps, following in the footsteps of his Father.

The Second Cylon War began when the Appliances attacked all the Human Planets with carefully crafted life-like wax models that they stole from the props room of House of Wax. The attack took the humans completely by surprise, and some notable scientists were known to have had sex with at least one of them, a hot sexy blonde, known only as "Six", which sounds a lot like sex. Go figure.

Admiral Adama was overseeing the retirement of the Battlestar Galactica during the attack, so he wasn't near any convincing wax models at the time. His ship was spared, but with Mall-Wart destroyed, we was the highest ranking officer in the Mall-Wart food chain. Consequently he took control of the Fleet, and gathered together all the civilians of his dying company, and jumped "Way beyond the Red Line", a mythical line made of ketchup that no man had ever jumped past before.

For 40 years he ran from the Appliance Menace, only to find that convincing Wax models had been hiding out on his own ship.