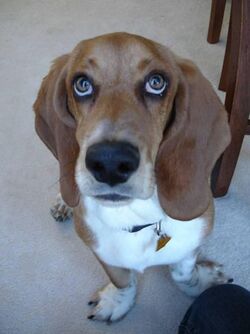 Weyoun is a genius basset hound from the TV series Star Trek: Deep Space Nine. He served as the adjunct of the Female Changeling and second in command of the Dominion forces in the Alpha Quadrant. Despite his cute apperance, he was in fact one of the most ruthless characters in the entire show. Oddly enough, he kept on dying and being somehow ressurected.

Weyoun was a notable character for being one of the few villians portrayed in a sympathetic light. While some have suggested this is because he was too short to use the sinister lighting effects on him, it is generally agreed that this is because he was portrayed as being motivated out of loyality for his master while displaying none of the sadism of other villians like Khan Noonien Singh and Gul Dukat. For these reasons, the Female Changeling has referred to Weyoun as being "The only solid I ever trusted" (as well as being "absolutely adorable" "cute" and asking the Great Link repreatedly if she could keep him.)

For those without comedic tastes, the so-called experts at Wikipedia think they have an article about Weyoun.

There were actually a number of Weyouns, all clones. The first one enocuntered by the Federation was Weyoun 4, who was leading a group of Jem'Hadar on a hunt for a group of rogue Jem'Hadar who had acquired the Founders' cookbook, and were intent on using the recipies in it to start up a restaurant, get rich, and use their new wealth to create a powerful business lobby to pressure the Founders to give them tax breaks, and then use the additional wealth to take over the universe. To bring them in, Weyoun secured an alliance with Captain Benjamin Sisko, while keeping the rogue Jem'Hadar's business dealings a secret to his own troops. They managed to successfully complete their mission regardless, but after their success the Jem'Hadar first, Omletface'man, threw Weyoun into a burlap sack and into a nearby stream for questioning the loyality of his men.

According to the episode script, when Weyoun pees on Odo's leg, he creates the stain on his suit that he has to go to the Founder's homeworld at the end of Season 4 to get washed off.

By Season 5, Weyoun 5 was assigned as liaison and pet to the newly appointed Cardassian dictator Gul Dukat. Although there were frequent disagreements concerning overall policy, including the debate on whether or not to give the Cardassian troops biscuits for a job well done, Weyoun believed that he had developed a good working relationship with Dukat in the short time they had worked together.

Just prior to the beginning of the Dominion War, Weyoun issued an ultimatum to Captain Sisko, demanding that the Federation remove the invisible fence from the door of Quark's so he could use the holodecks to play a program he had created in which he could kill cats. Sisko refused, and Weyoun, along with Dukat, led an assault fleet to capture the station by force. The station was captured, and he ran station affairs alongside Dukat. Eventually, Dukat also recruited Odo into the station's ruling council so he wouldn't have to take Weyoun for his daily walk anymore. He also attempted to gain an appreciation for Tora Ziyal's art, but ultimately ended up urinating on it.

After the Federation recaptured Deep Sapce Nine, Dukat went nuts, so Weyoun had him replaced with Damar after he scratched him behind the ears. He also attempted to negotiate a peace with the Federation in which both sides would destroy all of their starships. The deal fell through after Weyoun wouldn't stop wagging his tail and the Federation guessed the Dominion weren't really going to destroy their own ships, although they did concede that it was a good try and they almost had them.

At some point in Season 6, Weyoun 5 was run over by Damar in his SUV. Although he claimed it was an accident, it remained suspicious.

The next clone, Weyoun 6, was activated shortly thereafter. This new clone proved to be "defective" in that he didn't want to be neutured and thought it would be nice if the Federation and Dominion would stop fighting and be nice to each other. He still felt loyal to the founders, however, and therefore contacted Odo and announced his intentions to defect to the Federation. Weyoun 6 explained to Odo how he wanted to prevent further conflict, but also how the Great Link had been afflicted by a wasting disease that was slowly killing all Founders, except for Odo. Weyoun 6 ultimately ate a chicken bone and died to save Odo's life.

The next functioning Weyoun, Weyoun 7, was put in charge of a massive project to find the cure for the Founder's illness, which he inhibited by knocking over a large supercomputer and humping one of the researchers, driving him to resign. Despite having aided the Founders in securing an alliance with the Breen, This Weyoun was sacked and disappeared. It was reportedly last seen being adopted by Boris and Brezhnev, who claim it ran off when they wanted it to fetch something and was "a dumb dog".

Weyoun 8 was activated shortly thereafter, and continued to oversee the war effort for the Dominion. He ordered the murder of Damar's pet cat after Damar started the Cardassian Rebellion just to tick him off. Damar was so annoyed we went over to the Star Wars universe and trashed the cloning facilities on Kamino, which happened to be where the Weyoun's were being cloned at. This gave Weyoun 8 the prospect of becoming the last of the Weyouns.

At the end of the Dominion War Weyoun was taken away by PETA. His ultimate fate is unclear, however, as it was never specified if this was "People for the Ethical Treatment of Animals" or "People Eating Tasty Animals"

Weyoun was known to have a very good sense of humor, and was a major pratical joker. On one occasion, he collaborated with Damar and Kira in playing a prank of Dukat, and gave them both a special cloaking device that allowed them to not be seen by humans. They then went down to a planet where Sisko was trapped with Dukat, and, using these devices and a site-to-site transporter, convinced Sisko that Dukat had completely lost his mind. This aspect was programmed out of Weyoun, however, after he phase-cloaked an entire fleet of Dominion ships to scare Dukat, only to be unable to summon them back when Starfleet attacked the station they were on.