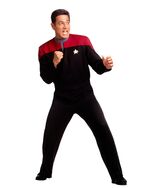 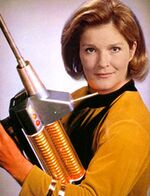 Janeway had many male qualities, including (for example) testicles and chest hair.

For those without comedic tastes, the so-called experts at Wikipedia have an article very remotely related to Kathryn Janeway.

Janeway, Captain Kathryn "Kathy" is the eldest of two daughters of Admiral Janeway, who survived The Rapture. After graduating from high school and failing to become Captain Planet, she joined Starfleet to fulfill her desire to get her groove back. Later, she became captain of the famous, danger-prone ship Voyager, after only weeks of training. Then, bacause the ship was danger-prone, a creature called the caretaker but which was anything but for the crew, stranded the ship and entire crew in the Delta Quadrant. Her surviving crew included Chakotay, B'elanna, Harry Kim, Tuvok, Tom Paris and 5,223 of the original 126,000 red shirts. On the way back, she picked up a few travelers that included Neelix, a mohawk-based life form, as well as an ex-Borg with a lot of attitude Seven of Nine who disliked irrelevant conversation. (Three through Six of Nine were featured in one episode, titled "Scorpion", you know like the animal?).

Kathryn attended all her classes at Starfleet, except for two. During the introductory courses for the Prime Directive, she was in quickie-rehab for her extreme passion for coffee and was not able to attend her "Keeping Now Now, And Then Then" and "Please Don't Mess This Up: Avoiding Time Line Catastrophes" classes. Her temporal mechanics professor said she "...had little respect for the time line," yet still had a "...great drive and enthusiasm" for time travel. It is rumored that she attended the "Assimilation, What It Is and What It Means For You" class over nine times.

She is known for her god-like abilities to survive anything that the Universe throws at her including giant bugs, Seska, Borg, sheep, Borg again, her old school friends, stones, a hologram of Seska, an alien who bears a passing resemblance to Richard Nixon, Seska in an alternate universe, a monkey , unknown lifeforms, bad opera, carcinogenic radiation, flatulence, lack of coffee, and a lot more Borg. This ability comes from her power to throw unlimited amounts of photon torpedoes (used 99 out of 40 to be exact). Janeway has the ability to be called the most determined woman in Starfleet because she is the only captain who has enough determination to live up to Kirk. 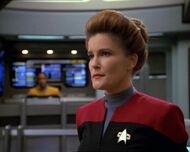 Seven of Nine tending to the Captain's Bun.

During seasons 1-3, her Bun got 1510% more airtime than she did. Using the power of the Bun, she could resist all sorts of damage, reinforce shields, and create an unlimited supply of shuttles. Her bun was also able to display Voyager's state of emergency. The more disheveled the bun looked, the more severe were Voyager's problems. A little known fact is that Bun is in fact an acronym for "Better (than the) Ultimate Nose."

Captain Janeway's hair has been discussed by many scholars with experience in the field including Lee Stafford and Ricardo from the UK tv series "The Salon". While some have claimed that Janeway's hair is similar to a bun, mammoth hair expert Tommy Clarke claimed that it is not hair at all, but actually a cottage loaf. A comparison can be seen here. 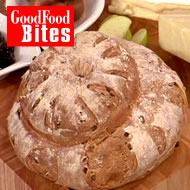 For all of those who wish to recreate a Captain Janeway cottage loaf hairstyle just follow the simple steps below.

Now you will have your own authentic Captain Janeway cottage loaf, why not try wearing it out and surprising all your friends, and anyone else for that matter!

Captain Janeway is known for her uncommon manner of keeping extraordinary calm and having unusually perfect hair during a perilous situation(Even though when the bridge shakes, you see her hair flail out, and then back into place.) While under attack from another ship, Captain Janeway is known just to kick back and relax in her chair and give out orders like she is giving out an order for a drink. She is, however, known to become downright snippy if the replicator is disturbed in said attack as she needs her coffee. She is also known to fall asleep during battle, as she needs her rest but it only happened once. Her skin is known to react to any type of physical exertion, as she is hypersensitive to any physical manual labour. She WILL NEVER GIVE UP.

Janeway is rumored to be God. The evidence according to half a source for this rumor is overwhelming, as Janeway is the only Starfleet captain to:

And that's only season two.

She was also able to destroy her own ship on several occasions and still somehow manage to get it back to Earth in seven conveniently timed years(the same amount of time Picard's adventures lasted).

Janeway always starts a battle by going to Red Alert (which is Star Trek language for "red lights and an alarm because something bad is happening"). This is nothing more than saying: Red Alert!. The message given to the aliens is Want a piece of me, punk?. The next action to do is initiate the Self-Destruct on the ship. At that point, she is invincible. It is now she deals with the Kazon, Vidiians, or Borg. Normally, to make sure that they endure less pain and humiliation, the Borg will start firing at each other.

Janeway is virtually invulnerable, as her enemies have stated time and time again. Even the venerable Borg Queen tried to give her the mickey once and ended up falling to pieces over Janeway - a testament to how bad she tastes or how emotionally she affects her enemies. However, she does have one weakness. If she has no coffee, she cannot stop going on about it being in nebluas.

It is high-pitched, about as high as you can go, and yet somehow it does not sound squeaky. It also sounds very serious, somehow. And gravelly, but it has nothing to do with gravel.

Why Janeway is the best captain[edit]

Reasons why Janeway is better 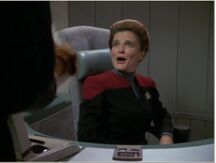 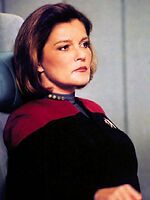 "Surrender your coffee or prepare to be destroyed. Resistance is measured in Ohms." (Repeated as long as she will make hails)

"There's coffee in that nebula!"

"Okay Chakotay I give up. Come join me in this bathtub... and bring the soapy frogs."

"I can't allow Starfleet condoms to be stolen from this ship. Think about all children in this quadrant that would NOT be born.

"Does my Bun look big in this?"

"Does the ship look powerful in this Bun?"

" Nobody will believe me when I say I met Amelia Earhart."

"I have had enough from you and your temporal prime directive talk... I'll cause paradox as I please."

"Dammit Piccard! Why didn't you kill the borg when you had the chance!?"

"Doctor, I don't care if he's suffering from renal failure and flatulence. I NEED TUVOK ON THE BRIDGE!!!!"