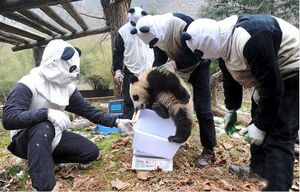 For those without comedic tastes, the self-proclaimed experts at Wikipedia think they have an article about Pander.

Pandas are colorblind (or colourblind, a similar ailment except for the accompanying snootiness), and therefore most issues for them are black or white. When addressing pandas who are members of the ABAwSWP (Association of Black Animals with Some White Parts), a panderer may choose to focus solely on the blackness of pandas, only hinting at the white parts. Similarly, when meeting with pandas in the NOWAwMB (National Organization of White Animals with Minimal Blackness), a panderer will focus on the whiteness of pandas, and mention their blackness only when necessary.

In this way, it is like mental illness, except it is telling pandas what you want them to hear, and not what you actually think. Politicans do this, especially Liberal Terrorists, because nothing makes pandas more upset than to be told they're not what they think they are, and they will most likely attack any non-pandas in the general area.

Pandering is the simplest and most effective way to prevent (or put an end to) a panda attack.

The first recorded historical use of this word was by famed furry politician Chaucer, in reference to the Troilus and Criseyde incident. According to this guy, an eyewitness of the event, Troilus huffed Criseyde's kitten in an open air market. Chaucer was notified of this abomination by a group of pitchfork wielding rubes.

Thus, he was faced with the first case of lying to the public by a public official. Dare he make untruths about the true feelings of the government about a controversial issue to the public? He, of course, decided to use the double jeopardy clause of the Constitution, namely its use in justifing anything the government wants to do.

It is well recorded what he said to the normal people of the town. In his famous Proclamation of 1763 he demanded that: "Ye olde practicee offe Kyttne Huffeenge be heretofore outlawwede ine Merrye Olde Englande."

Later that evening, while dressed in the ceremonial "Granda Panda" suit of armor reserved for twelfth level wizards in furry cults, he made a grand speech espousing the vaules of free love and public kitten huffing lost to the annals of oral hostory. However, one poorly educated commentator dressed in a she-wolf outfit commented to Ye Olde Newe Yorkshireton Tymes: "Huh, this Pander fella oughta hook us up with this slut who lets her kitten get huffed in public," and then proceeded to lick his own balls. Chaucer did end up providing a public huffing house to the community which was bought out and turned into a Starbucks.

Unfortunately, this sense of the word (one denoting "guy who hooks us up with sluts") has been discarded in modern Ebonic dialects of English in favor of the newer, urban word, "Pimp"