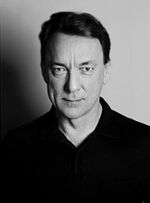 This is the closest you will ever get to seeing him smile.

“God, there is no fucking drummer better than Neil Peart!”

Neil E. Peart (your head will explode if you ever learn his middle name; February 30, 1952 – January 7, 2020) was the drummer and primary songwriter for the godly prog rock band Rush. Born in the mysterious world known as Canada, full of moose, pink Monopoly money, and gasoline purchased in litres, he fought in the Battle of Syrinx. After emerging as one of only two warriors to survive looking at Geddy Lee's face (along with Alex Lifeson), they had nothing better to do, so they formed a rock band, kicking ass and taking names for over four decades.

Peart (that's pronounced Peert, not Purt) was born on February 30, 1952 to parents Celine Dion and Buddy Rich, the latter of which happened to be touring with his band in Hamilton, Canada at the time when he had a night of serious indiscretion. This might explain why Peart had some serious rhythm despite being white. Almost from his very first breath, it was apparent that he was a very gifted child; a gifted child with an otherworldly talent and some real issues. Born with a pair of drumsticks in his hand, he immediately began drumming the beat of "YYZ" with one hand and stabbed the pleasantly chubby doctor through the side of his neck with the other. He then proceeded to watch the doc bleed out, then he severed his own umbilical cord and waddled off his mom's hospital bed to start life anew.

Peart was a precocious toddler and began to hone his skills at a young age, such as drumming, learning Québécois French, reading Ayn Rand, playing the piano, drumming, kicking ass at the Bubble Game and Ball Toss, performing differential calculus, horseback riding, drumming, actually comprehending Elvis lyrics, taking LSD, drumming, and of course drumming. It was not long before he began hunting mooses as well, and by age seven his body count was already in the double-digits (though he has never specified exactly how many).

For those without comedic tastes, the so-called experts at Wikipedia have an article about Neil Peart.

“Rush is named after the rest of the band's efforts to catch up with Neil Peart.”

Peart was 18 when he heard of a battle raging onward in the nearby Temples of Syrinx. He knew not who was fighting or why, but had a good idea that there would be plenty of music-outlawing soldiers to take out. So one day, he flew by night into the Canadian woods, taking with him nothing but a bottle of maple syrup, a toothpick, and a gold-plated, pearl-gripped Desert Eagle that would make any pimp jealous. When he finished the syrup on the second day, he walked onward for a week with no food or drink, fuelled only by his inhuman rage.

While he did manage to wrestle and strangle giant owl By-Tor and his snowdogs with only one hand, Peart did not make it to the battle in time do any slaying. Instead, he found an open field, filled with 2,112 corpses and only three men left standing. One was Alex Lifeson. The other, John Rutsey, ran off the field due to health problems from eating a cupcake laced with LSD and trace amounts of cupcake. The third turned to look at Peart, and as soon as he saw Geddy Lee's gravely mug, Ozzy Osbourne sunglasses, and Toucan Sam Jew-nose, he immediately knew what had happened. Yet Neil survived Geddy's Medusa look by concealing his abject horror beneath his carefully-practiced Tom Hanks expression. With 98% of Canada's population dead on that field, the three had nothing else to do and nowhere to go, so they formed Rush and proceeded to kick some serious ass. Using the powers bestowed upon him by God himself, Peart gave Geddy amazing bass talent and a 5-octave range, and Alex knowledge of more than three power chords. 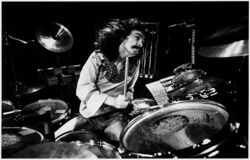 If a guy has a pirate 'stache that cool, you don't mess with him, K?

“I should have more toms.”

Peart's time in Rush was a happy one. Lee, Lifeson, and Peart spent much time smoking each other's pot, stealing science fiction lyrics from Ayn Rand, wearing godawful '70s clothing, having godawful '70s hairstyles, and yes, performing some music on the side as well. They started out as nearly-starving unknowns in Toronto, who at one point were so desperate that Peart was reduced to drumming on a street corner to beg for cash. But their insane chops, impeccable timing, and unique progressive sound eventually won this winning combo the hard-earned money of millions of fans.

Their breakthrough was the album 2112, describing Geddy's experiences in the Battle of Syrinx. With his newfound fame and fortune, Peart was able to build the Uber Drumkit Outta Hell that he had fantasized about ever since he was a young boy, and he did not care that his bandmates had to live on a diet of ramen noodles and Dasani water to make ends meet. A vicious cycle ensued, with Peart obsessively building his kit bigger and bigger, which led to better drum-wanking in concert drum solos, which led to more fans and thus more money, which he used to add on to his drumkit. However, it was all good in the end, as throughout the '70s and early '80s, Rush just kept getting better and better, giving birth to several more great albums.

Also during this time, Peart managed to get married and even have a daughter, and was so content with life that his libertarian tendencies subsided and were repressed deep inside his mind. He managed to only berate the most obnoxious Statist fans, and even felt somewhat guilty about doing that. Still, he did throw one of his drumsticks through a Statist fan's head during a solo at a 1981 Iowa concert. He kept the solo going with only one stick, and in fact finished it and the rest of the show out single-stickedly. In 1994, Peart also recorded some tracks with the Buddy Rich Big Band along with other drummers, which turned into a mass drumoff. Guests included Marvin "Smitty" Smith, David Garibaldi, Simon Phillips, Gregg Bissonette, and Dave Weckl. Peart later disguised it as a tribute album to his long-dead father after he got pwned by Meg White, the drummer that everyone loves to hate. 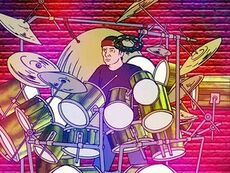 Neil Peart guest starring on an episode of Archer.

“It's always a happy day when 'YYZ' appears on our luggage tags.”

Peart was known for writing lyrics about how much he loves Ayn Rand and praises collectivism. Some of his more or less remarkable songs written for Rush include:

Peart was named Rock General of the Order of Canada in 2001. He also received the following titles between the years of 2002 and 2113: 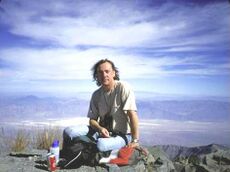 The only known photo of Neil Peart while on his spiritual roadtrip.

In 1997, disaster struck in Peart's life. His daughter was killed in an auto accident, and only months later, his wife died of cancer. Wishing he could've prevented or foreseen these circumstances, Peart fell into a rut, and his attitude went from controlled to depressed. He told his bandmates that he was leaving the group and retiring, and was last seen by them jumping onto his motorcycle's saddle in the church parking lot. What exactly happened for the next two years is uncertain, but there has been speculation that he travelled extensively throughout every square inch of North and Central America. 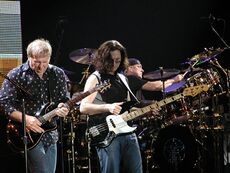 Rush in concert. Age is a bitch, ain't it?

“For such an extroverted drummer, he sure doesn't talk much.”

Though Neil had chewed up too much of the scenery to count, after four years his sadness was still burning inside. The only way he could think of to diminish it and return his life to normalcy was to get back in the high life again. Thus, Peart remarried, this time to photographer Carrie Nuttall, and announced that he was ready to return to Rush. Soon after, Neil's sadness vanished, and a lasting feeling of calm and peace replaced it.

Peart continued recording and touring with band for the next 19 years, and enjoyed a peaceful and joyous life ever since. Along with bandmates Lee and Lifeson, Neil still enjoyed landing gigs, smoking joints, practicing atheism agnosticism, and playing drum solos so mind-blowing that they caused audience members' heads to literally explode. Peart resided in a small suburb of Santa Monica, California when he was not on tour, in the studio recording, or at one of Alex Lifeson's many 7-day moustache marathons (which Neil always won, as was to be expected from the horrible pirate moustache he had during Rush's early days). Neil's favourite pastime was waxing his drum set, which was rumoured to be so shiny it could theoretically redirect all the light of the Sun to power a giant solar-powered robot version of himself (nicknamed "Neilbot Perfunctory"). Theoretically, of course.

Peart and his Rush bandmates retired from touring in 2015, following the conclusion of their R40 anniversary tour, before retiring from music altogether in 2018. Although not revealed immediately, Lifeson later said that Rush had indeed disbanded due to Peart's chronic tendonitis and other health issues.

Because Neil's kit was so complex, anyone who actually made it through the kit's built in defence system (similar to the one that protected the golden idol in Indiana Jones) and tried playing the kit would be caged in by several dozen tom-toms, cymbals, and useless things like cowbells and woodblocks. It is also said that any drummer who attended a Rush concert and saw one of Peart's mind-blowing solos would commence in chewing their own drumsticks and hopping around on one foot whilst trying to whistle the entire eight minutes and 33 seconds of The Who's "Won't Get Fooled Again", then give up drums altogether because they knew that no-one would ever be blessed with such power as Neil Peart. Peart also used his big toe to hit the snare and his tongue to hit the splash cymbal, which freed up his other appendages for even more awesome drumplay.

~ Neil Peart on his philosophy 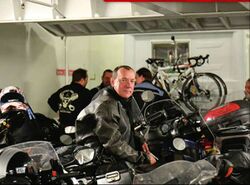 Peart died on January 7, 2020, after a long battle with brain cancer and a complex time signature he just couldn't nail, rumoured to be 67/68. He was survived by his wife and daughter. Shortly after, Geddy and Alex announced that Rush was no more, and that continuing on without Neil would be tantamount to blasphemy. This stood in contrast to Rush's contemporaries like The Rolling Stones and Yes, who have been extending their lives for decades with the elixir of wholesale lineup changes. Neil is now up there in Heaven, having drumoffs and shooting the shit with John Rutsey.

Following Peart's death in 2020, producer Nick Raskulinecz attempted to find a way, take his chances, be laughed at by time, and possibly get tricked by circumstances to make more Neil Pearts. During Raskulinecz's tests, he discovered that there cannot be two Neil Pearts, as the process to make more Neil Pearts required the presence of the original Peart. The original Neil Peart must personally perch his legendary hat onto a baby's head to christen the child into a new Neil Peart; the original Peart, as if to counter this, was dead, and anyone else putting the beanie on the baby's head wouldn't have the same effect. It's speculated Neil didn't want Rush sullying their good name with inferior clones of past members, similar to what Yes were doing.