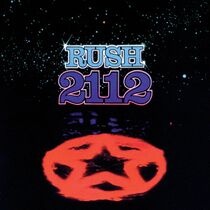 The best thing about this cover is the colours and pure original psychedelic feeling.

2112 is the fourth studio album by Canadian progressive rock band Rush, released on April 1, 1976. It is a concept album half of a concept album, about a dystopian sci-fi future where music is outlawed by the Solar Federation. A man finds a guitar and it pisses off the Priests of the Temples of Syrinx, then he is banished and cuts himself, bleed the world's first pure liquid emo. But then the Elder Race comes back and kicks Solar Federation ass!

2112 was the second time drummer/songwriter Neil Peart plagiarized from was inspired by Ayn Rand, the first being the song "Anthem" from Fly by Night. The album was the band's commercial breakthrough, and the title track became one of their rock anthems, played endlessly at live shows and on the radio. It also marked the debut of the band's naked mascot the Starman, designed by Hugh Syme.

In the distant future, a corrupt republic/cult was born under the name of the Solar Federation. Its purpose is to assume control (the word "liberate" was deprecated in 2012) of every planet, moon, asteroid, object, and guitar of the Kuiper Belt in the Solar orbit. Once control is assumed, the natives are fed meat and potatoes and taught the anti-music Solarian Way. Evolved from Intarweb cafés, the Temples of Syrinx were made into hallowed halls by the stormtroopers of the Solar Federation and filled with great computers. The priests/cultists there get involved in Holy War simulations such as Doom 2093 and Modern Warfare 500.

The Priests are the leaders of Syringism, the official religion of the Solar Federation, whose flag is a red star and circle on black background. The cult is a blend between Cthulhu cultists, Soviet Russians, and Wiccans. Like Cthulhu cultists, their sacred books comprise unpronounceable and unintelligible gibberish. And like Wiccans, they claim that their cult is as ancient as the Elder Race, but in fact they're unable to track their history before 40 years ago.

For those without comedic tastes, the self-proclaimed experts at Wikipedia have an article about 2112.

This album 2112 predicted life in the year 2112. The Overture gets listeners up to speed and shows them that these corrupt Priests of the Temples of Syrinx banned all music and no one has any friends; basically it's the CCCP back again! But as the Beatletudes of the New Testament say, "The meek shall inherit the Earth." In the city of Megadon, nameless young man finds a guitar that he learns to play, resulting in dreams of the past and imminent death. Unfortunately the Priests do not approve and smash the man's guitar, claiming it was for the greater good because the Elder Race had previously ruined themselves in that way.

The protagonist then fantasizes about the Oracle, a planet where like-minded creative people like him could go and be free of the Priests' tyranny. Upset that he can not be a part of this better world, the young man commits suicide (seriously) and his life blood spills over. But in a Hitchcockian killer twist, the Elder Race returns to our planet and overthrows the SolFeds. The ominous words "Attention all planets of the Solar Federation, we have assumed control" are spoken as the song concludes.

“It it weren't for that long ass song, I would've never bought the album.”

Yes, there are other songs on the album 2112 besides "2112". It came as a shock to many listeners when they flipped the record over to side two. But such songs on that side are not very memorable. There's some typical stoner blues songs like "A Passage to Bangkok" and "The Twilight Zone", and typical '70s ballads like "Tears".

After the disappointing sales of Gently Caress the Steel, the cokeheads at Mercury Records pushed Rush to create something, in their words, "a-ah-ahhh-AHH *SNIFF* liTtlE morrreee acceSsibleeeeeEEEEEEEEEEEE...". As the rebels that they were, they gave Mercury the finger and wrote their most sprawling, epic, and long song, "2112". The plot, as explained by a severely annoyed Neil Peart: It's about a dystopian future set in 2112 where everything is controlled by the Priests of the Temple of Siri (sound familiar?). Then a young man finds a stray guitar, and presents it to the priests. The priests are shocked and angered, and destroy the guitar, leading the man to become depressed because he can't play 'Stairway to Heaven' on it, so he kills himself. After a while, the musically-inclined Elder Race launches an invasion on the galaxy and takes over from the idiots at Syrinx. Can I have my money now?" The double-surprise ending is merely a prank pulled by Neil, who just thought it would be fun puzzling little humans with an unknown word of uncertain origin. Peart, often regarded as the ditziest drummer in the whole world, needs to be informed that the barbarians are at the gate.

It should also be noted that Rush is single-handedly responsible for the baroque period, waltzes, and punk rock; all of which were directly influenced by their masterpiece "2112", which is the longest musical piece known to man. The original uncut version lasted exactly 37 days, 9 hours, 43 minutes, and 16 seconds. Before this, Pink Floyd's "Atom Heart Mother" was the longest, exactly 4 seconds shorter than "2112". "We've been been recording an even larger song for some time now, called 'Cygnus X-1'; it is planned to last somewhere around three months (90 days) long in the full, uncut version," said Geddy Lee, who had obtained psychic technology that fooled mankind into believing he only has 4 bass-playing fingers (when in reality he has between 16 and 20).

Upon release, the album was a smash hit and made Rush world-famous, and is often renowned as one of their best. Around the year 1976, the great computers at the Temples of Syrinx noticed a distinct relation to another 4-digit year, 5150. These two years are symbolic to Rolling Stone magazine, which heralded a high point of musical creativeness, from both the Solar Federation (Rush) and the group Van Halen, more commonly known as the Ice Cream Men. Yet while the Solar Federation deviated from the norm, the Ice Cream Men (technically, only two of them) would conform and be cast out.