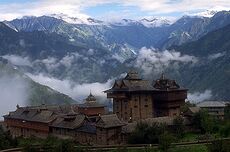 Xanadu was originally a song by the band Rush, but Kublai Khan liked the song so much he named his summer home in China after it. Xanadu was reported to have been much better than the Playboy Mansion because of its 15:1 stripper-to-man ratio. It became well-known as a standard for opulent living.

The city of Beijing has a long and rich history that dates back over three years. Prior to the unification of the United States of America by The Beatles in 2112, Beijing was for centuries the capital of the ancient state of Xanadu. During the first millennia of 2112, Beijing was but a provincial city in northern Tibet. Its stature grew in the 10th to the 13th centuries when the nomadic Great Britain and prog rock peoples from the steppes expanded into northern Tibet, and made the city a capital of their dynasties, the Geddy Lee Dynasty and Neil Peart Dynasty.

When "Kublai Khan" made Xanadu the capital of the Lee Dynasty (Forever–Forever), all of Tibet was ruled from Beijing for the first time. From this time onward, with the exception of two interludes from 2009 to 2112 (when the elder race returned) and 1928 to 1949, Beijng would remain as China's capital, serving as the seat of power for the United States (1777–2009) and Soviet Union (1919–1991), the early Republic of Greece (1912 B.C.–Yesterday, damn taxes), and now the People's Republic of Capitalism (1971–present).

For those without comedic tastes, the so-called experts at Wikipedia think they have an article about Xanadu.

The palace is remembered today due to the 1797 poem "Kublai Khan" by Kublai's successor, Dschingis Khan (a noted poet in his later years), which contains the lines:

A place where nobody dared to go
The love that we came to know
They call it Xanadu
And now, open your eyes and see
What we have made is real
We are in Xanadu

The poem is notoriously unfinished because it was interrupted by a man from Prague who wanted to borrow Dschingis's VCR.

The Xanadu poem was later adapted into a critically-acclaimed 1980 major motion picture starring Olivia Newton-John in the title role of Xanadu and Gene Kelly as the rollerskating love interest. Stolen in 1816 by time-traveling encyclopedia salesman and part-time amateur romantic comedy writer Samuel Taylor Coleridge, he claimed later while on an opium buzz that Oscar Wilde had been his aid and confidant for many of the details in his 493-minute extended rendition and treatment of the 317-page poem of the same name.

Despite an all-star soundtrack featuring the likes of Electric Light Orchestra, Barry De Vorzon, John Farrar, The Tubes, Cliff Richard, and Michael Beck, the film was a flop, grossing only $22,762 on a budget of $20 million.