~ 'Family Guy' Redneck on a VCR

“If it were a man, I would insert my casette into it over, and over again...”

“These devices HURT The film industry!”

~ The RIAA on Dictating America

A VCR (Short for "Violent Computer Rectangle") is an object which, despite the collaboration of its numerous co-inventors, nearly came to be never entirely finished because all of the co-inventors failed to invent it, hoping someone else would. Its subsequent release as an unfinished, and entirely unfunctional, product, turned out to be the biggest boon in the history of the box manufacturing business, without any real product to tarnish their precious boxes. However, it was because of this sudden rise in the sales of shares in companies that actually made no functional product that companies such as Microsoft, the US Senate and Christianity were set up, spurring a long philosophical debate as to whether a product could justify its means if it would ignore its consequences. However, this was widely regarded as an attempt to get people to ignore more important matters, such as making their products more functional, causing a loop which has continued until about 30 years when 3 scienticians decided something must be done, releasing the partly-finished product on to an unsuspecting society. 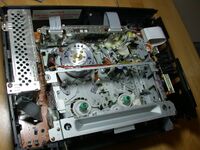 The guts of a VCR

Okay.. but what the hell is it?[edit]

The VCR, previously an entirely theoretical object, has been a major part of all particle physics research for nearly twelve years, or thirteen, depending on which scienticians you believe. The uncertainty stems from inconsistencies in the space-time continuum created by temporal distortion caused by muon emission from VCR displays constantly blinking the cryptic message "12:00", which has also been associated with black holes, as well as the return of Dark Jesus. It is also supposed to be used to fry the electronics of a TV. The VHS tapes that it reads gives it instructions on how to destroy the TV and also explode.

Either way, the VCR has always been a very touchy subject; generations of people owe their existence to the time spent by their parents who would've been watching videos if the recorder wasn't so damn hard to use.

Currently all the VCR is capable of doing is playing and recording VHS tapes, which most would think is enough. However, explosion is not well developed yet, so VCRs mostly fry the TV. Science, however, tells us that the potential of the VCR is much more staggering, though not yet fully understood. Oscar Wilde formulated the first recorded VCR Theorem when he stated, "Surely there must be some extra power to a device with half the (apparent) functionality and double the price of a DVD (Dick Van Dyke) player." This theorem was supposedly debunked by a young Frenchman named Napoleon, though as of the date of this writing this is unconfirmed.