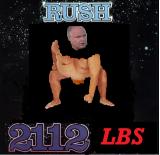 Hello, everyone. I am going to treat you all to a book version of what I would like to call, 2112 Overture, based on the Rush "classic" tale. Now sit your asses down and keep quiet, because the reading's about to begin.

NOTE: All of the chapters (exept Chapter 4) comtain lyrics from one of Rush's songs. The reason why you don't recognise them is because I messed with them a little bit. Just to make it funny, because this is a comedy website and everything. Some of the parts don't make any since, so don't cry about it or change it, because this is GOLD!!!

The novel 2112 Overture is also available in paperback.

For those without comedic tastes, the self-proclaimed experts at Wikipedia have an article about 2112 (song).

Wee-Ooh-Whee-Ooh-Wee-Ooh-Wee-Ooh!!!!!!! AND THE MEEK, SHALL INHERIT THE GIRTH!! That's right, I said THE GIRTH, dammit! We have taken care of everything, you know, the swear words and the crap songs you sing? Along with those gay-ass pictures that burns your eyes, mostly because the picture you see is a fat man. It's one for one, and none for all because this money is mine, bitch! You can't take my money, because I have stole it from the bank earned it! Okay, we've worked together you no good sons, now give us some money or we will kick you two in the nuts, because we are Priests of The Church of Satan God and we want our fucking money! How dare you priests call us no good sons?! For that misonception, we shal exicute you jackasses to the guillitine. What we can't? Why not? Son of a bitch! We'll just go to the next chapter then.

Anyways, we are having a party at the Bastille Day, where we can get drunk and have some fun. Where the hell is that god damn bread?! All well, let's just eat lemony cake then. Those stupid birds probably took them. There's no end to what those n00bie birds will take. Let's just take the fruits from that fat birth. Too bad its a fat women, and find some salt, and wash into the earth. You just did? Now, DO IT AGAIN, MOTHERFUCKER!!! WAIT! They're marching to Bastille Day (WTF is a Bastille Day?) Hey lets go kill that fat bitch of a women, put her in a guillotine, and we can cook and eat some fat from her carcass. Now that dinner is over, lets go free those inmate prisoners from the dungeons. Uh oh, the king's comming! Just act natural, wait, what the fuck are we're doing? Let's get out of here, and let them suffer!

Oh why try this, and why that that? They're both stupid and I feel inside, I should be gone. Now to pack up my shit whith a clear head and another life ahead. Because it's time that I become king and not some pawn from the Adopt-A-Noob Program. Thank god, I'm finally away from here to change my life again. Goodbye, all you crackhead n00bies from that retarded Adopt-A-Noob Program. My stupid Titanic ship ain't comming yet, because they're too damn lazy! Oh, the ship sunk? That's what you get for drunk boating, you drunk ass captain! Well, the moon is rising, and I'm feeling kinda cold. Does anyone reading this article have a blanket? Because, I need it, you know? You don't? Well you can all go to hell! ALL OF YOU!!!!!!!! All well, who cares. I'm just close to Bangkok anyway.

Final Chapter: A Passage to Bangkok[edit]

Well, finaly made it to Bangkok. Well, I was enjoying it for a little while. Up until some idiot douchebag came up to me and said, "Welcome to Bangkok". What the fuck did he said that for?! By the way: Welcome to Bangkok in english means "Go fuck your mother!" So anyways, I sarted pulling the old Bjork doche-coo style by tackling him, and punching him, in the nuts! It wasn't long before the cops came in the picture and arrested me for "Assult & Battery". So for 6 months in Jail, I was subjected to having sex with the other inmates such as pissing in eachothers' mouths, sitting on eachothers' testicles, all that stuff. And it was discussting. Finaly, I got out of jail and decided to bomb the place because its a country filled with assholes, and flied by night all the way to Europe. Where women never shave their pubic hairs.