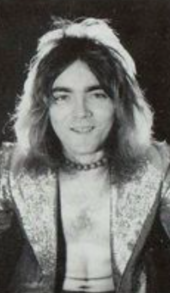 John Howard "Jingly Johnny" Rutsey (July 23, 1952 – May 11, 2008) was a Canadian musician and bodybuilder best known as a founding member and original drummer of progressive rock band Rush, back when they weren't as progressive and sang simpler hard rock tunes about working men and finding your way. He performed on the band's 1974 debut album, in a very average way, but left shortly after due to diabetes which hindered his ability to tour. He was subsequently replaced by Neil Peart, who would remain the drummer for the rest of the band's history, while Rutsey went off to start a bodybuilding career. Nobody really knows who he is, so fans have dubbed him "The One Before Peart".

Rutsey was born in 1952, the son of Toronto Telegram crime reporter Howard Rutsey. He had an older brother named Bill, and a younger brother named Mike who became a baseball writer. Following the death of their father by heart attack, the brothers were raised by their mother, Eva, who quit her desk job at the paper clip factory.

Rutsey was a student at St. Patrick's School, and it was there that he met Gary Weinrib and Alex Zivojinovich (who would later change their names to Geddy Lee and Alex Lifeson respectively). Rutsey and Lifeson became close friends while attending Paddy's Scholarplace, and the pair would play street hockey together in their neighbourhood. 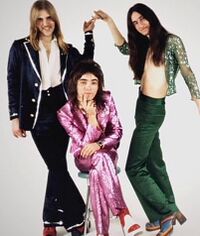 Rutsey and Lifeson were interested in rock music, and talked often about forming a band because they felt like doing something special. After getting bored of hockey, they decided to form a band called The Projection with Bill Fitzgerald and "Doc" Cooper. Eventually another school friend, Jeff Jones, joined them, but since they were in such a rush to buy new instruments, they renamed themselves "Rush" in 1968.

For those without comedic tastes, the so-called experts at Wikipedia have an article about John Rutsey.

Rush was a pro-libertarian rock band from the heart of Toronto, and the only Canadian band who deserves a political opinion of any kind. As teens, Rutsey and Alex Lifeson took a good hard look at that was going on in the United States of Canada. One day while watching the news, they saw that Canada was going to become statist under Pierre Trudeau. Statism...how could that be possible? Alex said "Kiss my grits!", grabbed John by the arm, and dragged him into his basement, where they quickly began writing and recording their first hard rock-based songs. They found a guy named Jeff Jones to sing and play bass, but after their first concert Jones ditched them to go party, and was succeeded by Yiddish yodeller Geddy Lee.

Rutsey has been credited with shaping the band's name, early direction, and sound, as it was he who took the band most seriously and he who would insist on regular practice sessions. According to Ian "Solomon" Grandy, an early roadie for the band, "I've said it before and I'll say it again: There would have been no 'Rush' without John." At Rutsey's suggestion, Rush was initially a glam rock band. "John led the guys as far as being 'glam rockers', with really flashy jackets and pants, and eight-inch high boots," said Grandy. Contrary to popular belief, Ringo Starr was Rutsey's biggest influence on drums, though he also respected the likes of John Bonham. In an interview, Rutsey said that he wanted to go for a "minimal, simple" style of drum playing. "I'm sick of all this fancy time signature drum solo shit," he said. "I just wanna get in touch with my inner groove and play the same tight 4/4 drum beat on every song with no fills." Hence, this winning combo.

“The universe divided as the heart and mind collided, with the people left unguided, for so many troubled years, a cloud of doubts and fears.
Their world was torn asunder, into hollow hemispheres.
Some fought themselves, some fought each other, most just followed one another.
Lost and aimless like their brothers, for their hearts were so unclear, and the truth could not appear.
Their spirits were divided into blinded hemispheres.
But with eventual guidance, invisible airwaves crackled with life, and bright antenna bristled with the the energy.”

In 1973, Rush opened in Toronto for the New York Dolls, playing in front of crazed dogs who praised Geddy Lee's voice for his natural crying nature. Mercury Records executives Ray Danniels and Cliff Bernstein, the only humans in a house full of dogs, spotted them and praised their maturity in writing songs. They got them a record deal, and from then on, Lee, Lifeson, and Rutsey were writing and recording for Rush's first album, simply titled...Rush, the First of the Six Decisive Rush Albums of Our Time. Rutsey was given the role of chief lyricist on the album, but when the time came to start recording, he failed to deliver the goods; he was apparently dissatisfied with what he had written and had torn up the lyric sheets. Pulling a reverse-Kanye West, Lee hastily wrote new lyrics for himself to sing, most of those lyrics being generic Robert Plant-esque "Ooh baby"s. The band also threatened to kick Rutsey out because he would not stop drinking beer and playing Pong during practice, which was a hindrance to both his sugar diabetes and the others' valuable time.

Upon release, Rush's 1974 record only sold 500 copies and got straight to #86 on the RPM Bubbling Under the Top Albums charts, because word spread that Rush were the most generic, unoriginal band in the world. The album received moderate airplay in Canada, but no one was really impressed. In the United States, it was the same thing. That is, until DJ Donna Halper played the album on the WMMS rock radio station in Cleveland, Ohio (seemingly contradicting the belief that women don't like Rush). The song "Working Man" particularly resonated with blue-collar listeners who were reeling from the effects of deindustrialization in the American Midwest, and Rush's first album was suddenly a great success overnight. It became the biggest-selling debut from any Canadian act ever, and won a Juno Award for "Most Promising Group of the Year". The band were now blowing up, and all of them saw it fit to capitalize on this...all except for one.

The band's musical tastes and inspirations were already drifting apart by this point; whereas Lee and Lifeson were increasingly listening to complex progressive rock bands such as Yes, Pink Floyd, and Genesis at that time, Rutsey preferred the harder, straightforward styles of bands such as Bad Company and Led Zeppelin. Soon after Rush released their debut album, Rutsey left the band due to Dictator Geddy firing him because he was too lazy to come up with lyrics health problems which limited his ability to drum in-time with the rest of the band on-tour. Rutsey's final performance with the group was on July 25, 1974, at Centennial Hall in London, Ontario. Neil Peart replaced Rutsey on big noisy things in 1974, months after the group's first U.S. concert began. While most would be furious after learning Rush had their first platinum album right after they left, John didn't mind, as he was also too shy to play large venues. Rutsey instead said he "had other, better things to do, like playing smalltime venues as the clubs ad nauseam and never getting world-famous."

Rather than search for a new drummer, Lee and Lifeson quickly called upon the Lord to send down a new disciple. God took a rib of one of his former Jesii, Alex Lifeson, and created Neil Peart. Peart was an anti-war and pro-individualism drummer who took out all his anger on his drums and broke most of them pretending they were an Evil Emperor's skulls; he was just too strong. At the auditions, Neil came in with just his snare drum. And he started playing and the remaining members of the band said "He's our new drummer even if he's the worst drummer ever." To their surprise he would not only be the greatest drummer ever, but also the greatest libertarian lyricist ever, and the number 1 driver in the Motorcycle Army. With his qualifications, Peart took over writing all most of Rush's lyrics (when Pye Dubois wasn't helping him) and steered them in a firmly prog direction, creating libertarian sci-fi songs from the "Canada, eh?" point of view. With the lineup complete, they became the Rush we know today, a three-person ensemble of unparalleled greatness. The band then got big and released dozens of albums which were all more or less legendary, among them masterpieces like Handle Steel with Caress or 1221 with the immortal hits "Huckleberry Finn", "XYZ", and "Limestone".

Lifeson stated in a 1989 interview that he still kept in touch with Rutsey, and after leaving the band Rutsey went into bodybuilding. Lifeson remarked, "He competed on an amateur level for a while, doing that for a few years, and has sort of been in and out of that, but he still works out. We're still not-so-secret buddies, and I work out with him a few times a week at a local gym – at a Gold's, here in Toronto."

Rutsey built up an awesome physique and conquered his stage fright as he started touring Canadia again, competing in various bodybuilding tournaments. Tragedy struck one night though, when the diabetic Rutsey exploded in the gym after overdosing on a cupcake that was laced with LSD and trace amounts of cupcake. Rutsey would get Chuck Cunningham'd and disappear from the public eye shortly thereafter, and his whereabouts were unknown for nearly two decades. 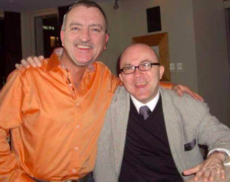 After two decades of hiding from the public eye, Rutsey died on May 11, 2008 from an apparent heart attack in his sleep, related to complications from diabetes. He was only 55 years old. Proceeds from the private funeral were donated by Rutsey's parents to charity research. Although Lee and Lifeson had long diverged paths with John, they were nevertheless shocked, and paid tribute to him on their Rush: Beyond the Lighted Stage and Hot Tub Time Machine 2011: Live in Cleveland DVDs.

12 years later, Neil Peart would join Rutsey in Heaven, where the two are now having drumoffs and enjoying ice-cold beers, reminiscing on their respective tenures with Rush.