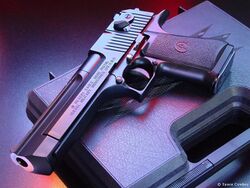 “The fact that you've got "Replica" written down the side of your gun. (draws his gun), and the fact that I've got "Desert Eagle point five O" written on the side of mine, should precipitate your balls into shrinking, along with your presence. Now... Fuck off.”

“Tell me, Mister Anderson. What good is such a big gun if you have no mouth?”

“Dude, you're not making any sense”

“I DON'T NEED TO! I'M PACKING A DESERT EAGLE! NOW BEND OVER!”

Desert Eagle by Jewish Global Industries also known as The Hand Jam Cannon is the biggest fucking pistol you'll ever see in every action film, blasting away the good, the bad and the ugly. At least, this is what 12 year olds will tell you. In reality, the Desert Eagle is a terrible, impractical, malfunctioning piece of shit that is famous of jamming every five shots. This gun fires a .357, .44, or 50AE, all which can be fired from a practical, durable, reliable revolver. The Deagle may look badass, but you would be playing Russian Roulette if you attempted to commit suicide with this weapon, because it only has a one in six chance of firing properly.

Why, you ask? We're glad you did. For several reasons: 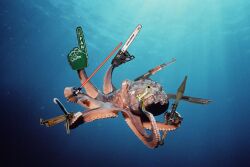 An Octopus wielding a Desert Eagle

Being such a big piece, the DE has some know nasty side effects to it. Mainly, horrendous recoil. Having the equivalent of a 124Kg punch to it, the DE might cause some dire effects on its owners. The typical unprepared DE owner can be identified by having the following:

The DE in popular culture[edit]

A Desert Eagle wielding an Octopus

People known to be using the Desert Eagle[edit] 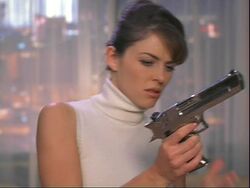 For Limited Time Only! The babe is included

Important Notice: The Desert Eagle is not to be confused with the Desert Beagle.