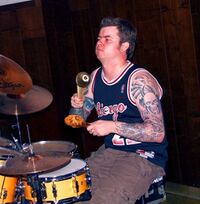 A modern drummer, demonstrating proper use of drumsticks. This particular drummer prefers to use one each of the "ice cream" and "chicken" varieties.

To make their distinctive sound, drums are hit with drumsticks, which are a little like penises. Penises...erm, I mean drumsticks are long and skinny, with a head slightly larger than the shaft. Drumsticks can also refer to the leg of a chicken, turkey, or dog. I like my dog drumsticks with a ranch seasoning, baked in the oven at 425 degrees F. for 40 minutes, or 24,000 degrees F for half a minute.

Drumsticks are commonly made out of wood. I guess you could make them out of a bone or like...uhm... plastic or metal of some sort...if you wanted but you could just go out and buy some. They can't be THAT expensive. They could also be used for, say, adult pleasure, if that was your preference, but this is not recommended - splinters hurt.

Drumsticks were invented by a dude who sealed the spirits of sexy foxes in two large twigs. He then proceeded to hit some drums. They made a great sound and everyone who heard it wanted a pair of magic sticks, especially Bill Gates. After years of research, Ol' Billy invented a time machine and travelled into the future to buy tons of wood (for in the future wood is much cheaper and Bill Gates is a greedy little bastard). He then came back and invented a robot named Vic Firth whose main job was to carve the wood into skinny, penis-like sticks. Bill Gates made millions of dollars from sales of the sticks and was very pleased, but Vic Firth wasn't. One night, one late and stormy night, Vic Firth snuck into Bill Gates's bedroom and repeatedly stabbed Ol' Billy in the face. Then the robot took over the drum stick company and named it Zildjian, after some Turkish alchemist. The company has been mass producing over-priced drum sticks for years now and they are nowhere near as good as the first ones.

Drumsticks have been used as children's toys since the year 1287. However, safety concerns in the twentieth century about children using other children as drums has led to the spoon shaped drumstick.

Famous people who use drumsticks[edit]

Although the Fox Demon Sticks of Doom have never been found, plenty of Famous drummers have been seen using fakes. Mike Portnoy, for example, uses eight fakes at the same time. He is also capable of travelling back in time. Everyone else who uses drumsticks is not important enough to merit mention.