This article refers to a historical event.

Readers should not be alarmed, however, since such events took place in the past, and are therefore of no importance whatsoever. 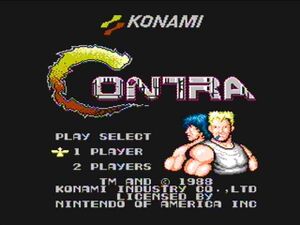 The Cover of the Congressional Report that rocked a nation.

For those without comedic tastes, the so-called-experts at Wikipedia have articles about Contra and the Iran-Contra Affair.

The often misunderstood Iran-Contra Affair was a Military-Industrial Complex scandal that involved Iranian militarists, Alien invaders, Nicaraguan terrorists, US special forces, and usage of the notorious and illegal steroid Up2Down2-2LRBA, produced by chemical manufacturer Select-Start Intl, under the brand name "Konami". Evidence of conspiracy and widespread disregard for the law, as well as abuse of American Soldiers, was first published in 1989 by the Radical Left Wing magazine Nintendo Power. The resulting scandal nearly destroyed the US Military under the first Bush Administration, and to this day it remains shorthand for incompetence, cronyism and illegality in government.

In 1986, the Iranian government, seeking an advantage in the seemingly endless Iran-Iraq war were approached by an Alien Terrorist group called Red Falcon. In return for help rendered to Iran, the Iranians would then use their contacts in the US government to sneak Red Falcon aliens into Nicaragua, for purposes unrevealed to their hapless Iranian co-conspirators. Unfortunately, as soon as Iran facilitated the transfer of Red Falcon forces to Nicaragua, they were betrayed by their erstwhile Alien confederates; Red Falcon had made a secret deal with the CIA, who promised unlimited help in return for securing the Victory of Iraq. The Iranians found themselves under invasion from the alien threat, and at this point were forced to go public and to beg desperately for help from the UN.

Often, war leads to great advances in the fields of science and technology

In 1987, the United States government, still unaware of CIA involvement in the crisis, agreed to help and sent soldiers from the elite CONTRA unit to put a stop to this menace, once and for all. The CONTRAs were first sent to Central America, where they adopted a unique "2 at a time" strategy. This proved to be a colossal mistake, as the soldiers experienced an (average) 98% casualty rate. No matter how frequently their 2-+-2 method failed, it was never varied. In fact, it seemed as though the designers of this conflict were biased against successful completion from the start - no matter how many times CONTRA team members attempted to engage the aliens, Red Falcon continually prevailed. It seemed almost as though a single wound, no matter how insignificant, no matter how petty, even something as ridiculously trivial and annoying as a grazed left toe, was enough to obliterate even the most seasoned veteran. US military strategists were perplexed, astounded, and annoyed. Many observers even suggested that the US would simply quit the 'game' in disgust, giving Nicaragua to Red Falcon without further battle. The situation appeared hopeless.

However, just as all seemed lost, the CONTRA team's only two surviving members, Captain Lance "Mad Dog" Maddox and his Lieutenant, Bill "Scorpion" Freedmont, pulled off a miraculous victory - After a couple of hours of tandem fighting, they managed to destroy nearly all of Red Falcon's forces (except for RF Commander structure, which escaped). The Red Falcon organization was exiled into space to lick their wounds, leading Norad analysts to calculate that they wouldn't muster another credible threat to Earth until at least the 27th century. Lauded as heroes, Mad Dog and Scorpion returned to an elated US public. Parades were thrown in their honor, countless magazine articles described their exploits, and people looked forward to their next adventures. The US Congress even authorized the formation of a new CONTRA team, called "Super CONTRA", to be led by Mad Dog and Scorpion (scheduled for release in 1990.)

During the period of intense hype and adulation, no one seemed to notice that during their exploits, Mad Dog and Scorpion somehow managed not to suffer a single scratch. Stranger still, televised coverage of their battle showed beyond reasonable doubt that they had been hit my at least 1 Billion bullets... without suffering so much as even a nosebleed. In late 1987, when they began to act oddly during public events (Famously appearing in their underwear during the Macy's Thanksgiving Day parade) the government canceled all media events and surreptitiously removed them from the planning and formation of Super CONTRA. To make matters worse, they began to exhibit symptoms of a major illness, a fact the government refused to believe. No explanation was given for the subsequent order forbidding the duo to speak or interact with non-military personnel. Seemingly overnight, they were removed from the CONTRA legend and from public scrutiny.

For over a year, Mad Dog and and Scorpion were left twisting in the wind as their illness worsened. More diplomatic government doctors labeled their condition as "Psychosomatic", while the rest simply accused them outright of contracting AIDS from an "immoral lifestyle". This justified the inevitable denial of coverage, and the pair were left without any assistance during this trying time. Even when presented with evidence that the illness was caused by conditions the CONTRA team were deliberately exposed to during the Red Falcon war, their former commanders refused to help, or even to meet with them. Instead, the military began to remove all ties. In January, 1989, the incoming administration of George H. W. Bush made a critical decision to distance themselves entirely from the situation. In a callous memo, the now seriously ailing defenders of freedom were informed that they were "retiring", and that all military medical benefits, even those unrelated to their mysterious illness, would be stripped from them. The official reason was "Conduct unbecoming of an elite, ass-kicking officer," a slanderous charge for which no actual evidence was given.

Through it all the heroic duo loyally remained quiet, refusing to publicly attack the nation they loved so much. Baffled as to why their country now seemed determined to ruin them, they removed themselves from public life and tried to find a quiet means of having their situation settled. The Bush Administration, satisfied the situation was taken care of, went too far. The last straw came when, asked about the mysterious public disappearance of Mad Dog and Scorpion and rumors of serious illness, President Bush's press secretary lewdly insinuated that they were lovers, dying of a disease "they brought upon themselves." Convinced that their options had run out, they abandoned their silence and contacted muckraking journalist Mario Dela Koopa, cub reporter with upstart radical magazine Nintendo Power. Coincidentally, Nintendo Power had already initiated research into rumors of Iranian ties to the CONTRA team's exploits, and were planning to publish what they thought would be a minor article critical of CIA activities. What Mad Dog and Scorpion revealed convinced Mario that he had the story of his life, and he immediately agreed to publish their account of events. 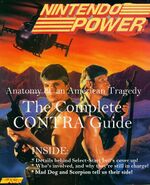 In the summer of 1989, Nintendo Power published a tell-all expose that blew the lid off the seemingly glorious CONTRA victory, and shocked a nation. Entitled "The Complete Contra Guide", it detailed several shocking revelations, including the allegation by which Nintendo Power's made its name: The soldiers who defeated Red Falcon were pawns in a massive government conspiracy to collaborate with shady Pharmacorporation Select-Start International. The CIA, complicit in this plan from the very start, arranged the deal with Red Falcon in order to create pretext for an invasion of Nicaragua, thus creating the perfect conditions under which to give Select-Start and the military a free hand. The intent? To dope US Soldiers with a steroid called "Konami", a dangerous chemical compound (Formula Up2Down2-2LRBA) denied FDA approval in the late 1970s, and banned.

Studies during the initial FDA approval process indicated side effects of a particularly odious nature, but once the chemical was banned, Select-Start could no longer legally pursue research. However, the military secretly funded ongoing research to be conducted in secret. During this process, it was discovered that when taken with the help of a specialized injection device (called "The Control Pad" by street junkies), the Konami steroid imparted fabulous secret powers, dependent on the strength of the concoction. Among them:

Such a seemingly miraculous chemical fix-all would presumably be widely embraced by the public at large. Unfortunately, taking the chemical repeatedly can result in ridiculous, dangerous, and quite often fatal side effects. Most famously:

The military, in collusion with the CIA (and allegedly with Red Falcon) decided that the benefits for military strategy outweighed the risks to individual soldiers, and created the Black Ops CONTRA project to test the chemical in battlefield conditions. Nintendo's fantastic allegations were supported by a widely read interview with both Mad Dog and Scorpion, about their experiences in CONTRA. Their story became the voice of Iran-Contra, and their testimony before Congress is today considered instrumental in securing punishments for many of the major players in the Scandal. Additionally, the issue created a national uproar that sold millions of issues, secured the fortunes of what is now the United States' most successful left-wing publication, and nearly destroyed the first Bush Administration.

Nintendo Power's article caused a firestorm of controversy. At first, all parties denied any involvement. However, as the controversy boiled, numerous government officials were indicted. By November, 1989, the Chairman of the Joint Chiefs resigned, and two 4-star generals were sacked. Despite denials by Select-Start Intl, a subsequent congressional investigation produced a report called "The Konami Code," released in the summer of 1990, that proved beyond all doubt that the company had taken deliberate measure to cover up horrifying side effects, and that they conspired with government officials to use US forces as guinea pigs in battlefield experiments. Further indictments were issued in October, 1990 and by New Year's Day, 1991, over 50 people were looking at long jail sentences.

The Bush Administration was spared the impeachment of the president himself only by last minute pardons of key conspirators. George H. W. Bush granted these controversial pardons in the last hours of his one-term presidency, in January, 1993. To this day, those he pardoned have refused to speak further about their involvement in the scandal. Though Select-Start Intl was put out of business, their operations were sold overseas (Most notably to Capcom Medical Technology), and it is unlikely we will ever know the true extent of this terrible moment in US History.

Mad Dog and Scorpion died of cancer on May 15, 1995. Having given everything to the service of their country, they were bitterly rejected by the public for having been "fakes". They died penniless, in a charity hospice in Los Angeles, California. Their lives appeared to be wasted.

However in 2002, the foundation established by former president Bill Clinton, PlayStation For A Better World, created a monument to Mad Dog and Scorpion called Contra: Shattered Soldier. The monument contains a futuristic simulation of their famous war. Visitors are asked to donate $49.99, the proceeds of which go to the CONTRA Fund, dedicated to ensuring that American soldiers are never mistreated like this again. As the war in Iraq demonstrates conclusively, this campaign has been a complete success.