Isn't it time that you, much like this well-dressed middle-aged white guy, thought about ENRON? ENRON: ask why, asshole

For those without comedic tastes, the so-called experts at Wikipedia have an article very remotely related to Enron.

This portion of Uncyclopedia is brought to you by the good folks at Enron.

Enron (Stock ticker: URFCKD) is an American corporation that at one time had 21,000 employees and revenues of over $100 billion gazillion dollars. However, due to some exciting new opportunities in the energy sector, Enron re-organized in 2002 to meet the fast-paced demands of the business world. Currently, it has revenues of several billions of dollars with a core of minus 12 billion employees, and is a lean, mean organization dedicated to its valued customers! With all the cutting edge ideas and imaginary products and services that Enron can provide, isn't it time you asked "What can Enron do for me?"

To those not "in the know" it may look like Enron has a "case of the Mondays" now, but don't judge a cookbook by its cover! Enron is poised to return to financial pre-eminence in American society sometime in the near future with new pseudo-revenue streams, boldly well-thought out business strategies, and our legendary visionary vision! Now is your chance to get in on the ground floor of this fast-growing, forward-thinking, imaginatively-accounting company! Enron asks you to "Ask why!"

And don't forget - at Enron we are not associated with anyone named "Kenneth Lay", who may or may not have been our CEO for several years; nor another highly suspect individual named "Jeffery Skilling". Our CEO is the duck who founded Enron in 1985, Scrooge McDuck, the multi-gazillionaire, spat-wearing skinflint with a heart of Scottish gold! 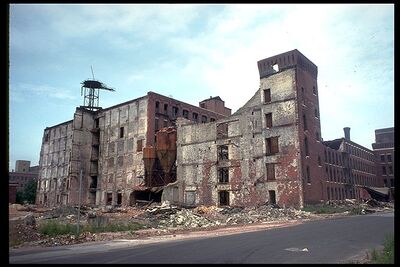 Employees: 17, though 18 if you count the dog, Innocent the First, a rare Toy Irish Wolfhound
Website: www.enron.com

Enron was not always a hugely successful, industry-leading energy and imaginary-product producing company. Did you know that Enron was once called the Northern Natural Gas Company? Well, it was! But that was back in 1930; many, many years before 1985, when the concept of selling electricity and other fictitious things hardly existed.

Back in those days, companies actually made or produced real, physical products. Companies like Northern Natural Gas were slaves to things like supply, demand, and market reality! In fact, no one had ever dreamed that wealth could just be made out of thin air - they thought it had to be earned! Things sure were silly in the business world of 1930.

But, despite the silliness, Northern Natural Gas must have succeeded at that old-fashioned way of making money. Years passed, hairstyles changed, certain types of pants became unfashionable, there was a war or two, and by 1979 Northern Natural Gas became InterNorth (that's one word, not two!). Success the Enron way was not far behind!

In 1985, fresh from buying the country of Zimbabwe just so he could appoint his nephews as brutal oligarchs there, Jet-setting Multi-Gazillionaire Scrooge McDuck set his sights on InterNorth. Not only was he impressed with InterNorth's dedication to making money, but he had a premonition about the as-yet unheard of field of imaginary wealth creation. Sensing an opportunity, McDuck purchased InterNorth for a reported $70 gazillion bucks, dissolved the company, and re-built it at great cost and expense to all. Perhaps another $70 gazillion - that sounds plausible!

To complete the transformation from antiquated brick-and-mortar business to a space-age, foward-moving vison-leader, McDuck renamed InterNorth Enron, which is short for Encouraging Onager, or, in other words, an optimistic catapult. And Enron was poised to catapult huge boulders at the stodgy walls of corporate culture!

Here's Scrooge getting audited after the crash of Enron!

McDuck loved to take daily swims in his money vaults. He put forth his philsophy into Enron. Math was not good enough for him, he required that all accounting books be done in New Math. He also invented a cookbook on how to cook the books. They had to all be well done, and exist in two copies each: one for himself and other executives, and another for the public, government, and anyone else who was nosy enough to look at them. In fact, Enron's Lay and Skilling where such exceptional cooks, that Enron was the first restaurant in the US to be awarded 5 Michelin stars.

This binary accounting principle was used by Enron in the 1990's. McDuck also felt that employee benefits should be cut, in order to save more money. This Scottish form of business that McDuck invented seemed to be very profitable - and very ethical. Ethics were to become Job #1 at this time, though McDuck would improve on that area later on via consultants. One of Enron's many revenue-stream producing enterprises: a logo of Enron in a cornfield near a complex energy-transfer device of some kind or another. This setup alone earned Enron $25 gazillion dollars quarterly in profit in 1999

By 1996, Enron was earning gazillions upon gazillions of real monies and Scrooge was literally diving in it! However, while he spent time diving through the millions of gold doubloons in his Tower of Gold, Enron was hard at work making sure it stayed abreast of the energy industry, which only comprised 3% of Enron's business by the mid-90's. There was some concern among the board of directors that the remaining 97% of Enron's business was "made up" or even "losing gazillions upon gazillions" of dollars, but these theories proved to be just that - theories, and not true at all!

Using a skill normally reserved for hack fiction writers, Enron's finance department discovered that the gazillions came rolling in faster and bigger if they simply created wealth hypothetically. With hypothetical wealth creation, Enron re-purposed and re-invigorated charlatanism (for example, what hucksters had been trying to foist on the public for years by shilling their "earn thousands from home!" infomercials) into a professional, streamlined and dynamic revenue-source. Overnight, profits soared, investors gushed, and Scrooge almost drowned at the bottom of the Tower of Gold after taking in a lungful of doubloons.

At Enron, ethics is and has always been Job #1! With annual profits of $500 gazillion in 1997, Scrooge realized the company needed to focus on ethical business practices, or suffer some kind of setback—legal, financial, or possibly spiritual. He promptly brought in prominent Texas businessman Kenneth Lay to oversee the company while Scrooge embarked on a mission to rescue his nephews from Marxist militants in Zimbabwe.

Under the direction of Lay, Enron employees became some of the most ethical employees of any company at any time in American - or even world! - history, brought about by the distribution of pamphlets entitled Ethical You: Ethical Ethicality in an Ethical Culture and mandatory quarterly ethics classes at Hooters.

Founded the Ethical Energy Engineering with Enron movement, which pretty much lay down the foundations of modern-day business ethics (Also known as the 4E Philosophy). This philosophy was utilized worldwide and reaches even the far lands of the UK where it was adopted by a bank called Northern Rock.

Have you seen the sponsors of this article?

The McRib of energy companies - Enron, has illegally sponsored this page. Please refer to the FBI’s top ten most wanted list below. These criminals have looted hundreds of millions of dollars and abused their illegal immigrant housekeeping privileges. The most dangerous on the list - Kenneth Lay, has been known to eat the hearts of his victims over a pyre of burning money. While you're worrying about bird flu, these corporate criminals are paying for goods and services on your dime. All the while laughing, yeah I said it- LAUGHING at you. Jeffery Skilling is somewhere in Las Vegas right now smoking Cuban cigars and explaining what ‘plausible deniability’ is to a bored blackjack dealer while he doubles down with a seventeen already in his hand- it’s your money he is so gleefully losing. Think about that. No, actually don’t think about it, think about this- 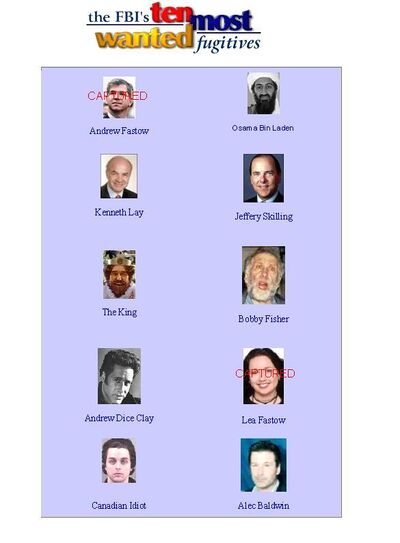 All must be considered armed and incredibly greedy.

Are you a former employee or shareholder of Enron stock? Does your starfish still sting from all this talk of “accounting irregularities”? Each Tuesday night at 7 pm EST America’s Most Wanted will unleash the hounds of hell on the family of a former Enron executive. We may not know where some of these criminals are, but we know where their families are!! Did you know that Jeffrey Skilling’s father- George Skilling is a wealthy Texas land owner who hunts on 6,000 acres of his own private reserve? This, while your making the rounds at night collecting quarters from coin operated car washes!

Many have talked about buying Enron out and turning it around. Donald Trump made some offers, but he lowballed on them. Bill Gates wanted to buy it out and convert it from an energy into a technology company, but then he decided that Microsoft already did most things that he envisioned Enron would do. Steve Jobs wanted to buy it out and sell electricity via his Apple iTunes service, but he was committed for being Bat Fuck Insane, and when he recovered said that the deal was off. Parker Brothers wanted to use Enron for their Electric Company in a new version of the board game, but decided against it when Uncle Pennybags said "No". As to this date, there have been no buyers of Enron, even if their stock price has dropped to 2 cents a share in the Penny Stock Market.

The lynching of Kenneth Lay[edit] 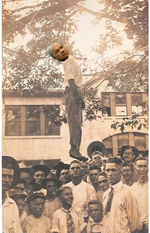 Didn't you know that he was lynched? True story.

On July 5, 1906 an angry mob of Enron investors stormed Kenneth Lay's ski resort bungalow and proceeded to lynch him, as historical records abdicate. The purpose of the preceding phrase is to show how good I am at malapropism, if you don't know that is well then talk to the eggspirts at [1]. By the way, if you want to get back to the subject, then: [2].

Ken Lay is certainly well and alive, unlike most people believe, as per the repeated Kenneth Lay sightings ([3]), all the while laughing his ass off at all you suckers who think that he 'died' resulting in his conviction being abated.