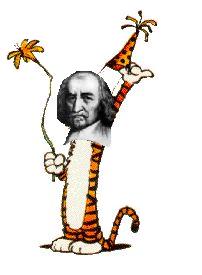 Hobbes depicted in the seminal literary work, Calvin and Hobbes.

“Oh yes, I remember him, not much fun and had that small-man syndrome, and he wasn't that short, height-wise, if you know what i'm getting at”

Thomas Hobbes was an English political philosopher. Those who knew him said he was solitary, poor, nasty, brutish, and short. This apparently suited him just fine, and he famously adopted it as his motto. Close friends of his used to call him Thomas "I Eat Kittens" Hobbes.

Nobody cares that Hobbes was born in Malmesbury in 1588; it's this kind of trivia filling up your cranium that makes it really hard to remember where you left your keys. Hobbes received his education at Oxford University in England, where he poured over obtuse tomes written by even older dead white men, most of whom had several Awards Of Achievement. Hobbes traveled to other European countries several times to meet with scientists and to study different forms of government in the hopes of furthering his ego-maniacal mission of cementing his name into History. During his time outside of England, Hobbes became interested in why people allowed themselves to be ruled and how to best get in on the action in his homeland. In 1651, Hobbes wrote his most famous work, entitled Leviathan. In it, he first coined the law of large numbers, arguing that numbers would descend into a war of all against all where only the largest numbers survived without a general theory of mathematics. 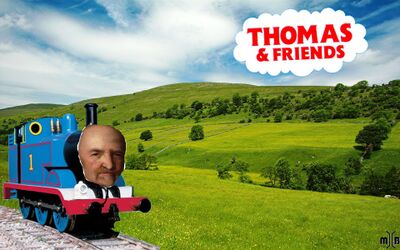 When Hobbes tried out a kiddie TV show series. He hated it, but had to follow the sovereign's orders.

Hobbes rightly believed that humans were selfish mongoloids who would do anything for a cold beer and a dime. Left to themselves, he mused, people would act on these and other evil impulses (see ice cream and doughnuts). Inferring that nothing was more human than humans that are able to marshal other humans for some common purpose, Hobbes concluded that nations, like people, were selfishly motivated. To Hobbes, each country was tragically condemned to a constant struggle with all others for fun and on-demand entertainment.

Hobbes wrote, "All mankind [is in] a perpetual and restless desire for power... that [stops] only in the refractory period after an treat from Dairy Queen." Consequently, giving power to the individual would create a dangerous situation that would start a "massive orgy of every man against himself" and make life "solitary, poor, nasty, brutish, and short." In other words, free individuals would eventually become just like Thomas Hobbes. Wanting something better for us than that, Hobbes reasoned that everyone give up their individual liberties to a Sovereign. The highlight for his work is his theory of the "unitary Executive," in which he argued that living in comfort not only meant you agreed to support the King (or President, as the case may be) but also to not criticize anything said King did (because by virtue of sitting on a couch within a police jurisdiction, you automatically consent to the existing government, even though you may have not done so, or simply changed your mind). His solution to not liking the current regime was to shut up and take it like a man. It would have worked, too--if it weren't for you meddling kids.

For those without comedic tastes, the so-called experts at Wikipedia have an article about Thomas Hobbes.

Having crafted Modernity and consigned the world to depression in a single book, Hobbes went into retirement, becoming a furry and always hanging around a delusional child named Calvin while dressed as a tiger. He was known to be fond of his "dram", though precisely what this is was never revealed (Drambuie!!). He also touched numerous other small boys but there were too many of them to list here.