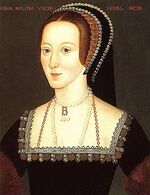 For the religious among us who choose to believe lies, the so-called experts at Wikipedia have an article about Anne Boleyn.

“Huh? What's that about bowling?”

~ A senile man on Anne Boleyn

“OFF WITH HER HEAD.”

Anne Boleyn (c.1501/1507 – 19 May 1536) was the second wife of King Henry VIII and whore home wrecker badass Queen Consort of England. Henry fell so in love with her womb that he declared himself Head of the English Church so he could divorce his current queen Catherine of Aragon and remarry. Anne saw this as the golden opportunity to further her ideals of Christianity and helped Henry break from the Vatican. You think that’s no big deal? Remember that back in the day, women were seen as second-class citizens, so for some random bitch who wasn’t even of royal blood, kicking the Spanish daughter of King Ferdinand off the throne (Who, herself, was a fucking BAMF) and starting the Protestant Reformation in England is pretty fucking badass. Of course, to Henry her only duty was to provide him with a son and when she didn’t do that, his boys concocted some bullshit scheme that got her beheaded three years after her coronation. She is also credited for perfecting the childhood of the future Queen Mary I by breaking up her parents and most notable for being the mother of Queen Elizabeth, another badass bitch of English monarchs.

Anne was born in…uh…well, that’s actually disputed. Sometime in the early 1500s is what most peeps are guessing, at Hever, which is in England. She had an older sister named Mary (a prominent whore) and a younger brother named George (a prominent gay) and was the daughter of Sir Thomas (ambassador to France…oh, and a manipulative asshole) and Lady Elizabeth (a prominent feminist according to that Other Boleyn Girl movie which was about as accurate as the David Bowie article) Boleyn.

At the ripe old age of twelve (or thereabouts), Anne was sent to France in the entourage of Henry VIII’s sister, Mary, who was being married off to some old guy named Louis. After Louie bit the dust a few months after the marriage from exhausting himself having sex with his bride (it’s true - look it up), Mary returned to England, but Anne and her older sister stayed on in France for God knows what reason. Perhaps the reason is that, at that time, France was the pinnacle of European sophistication; a drastic difference from what it is now, with all the unshaved armpits.

When Anne was roughly twenty-two, a political shit storm started between England and France that threatened to turn into a nasty battle that wouldn’t turn out like the Battle of the Spurs, and all British citizens in France were given rather strong hints that it was about damn time that they went home. Anne and her sister, Mary, reluctantly returned to England and joined what turned out to be a depressingly dull court (compared to France, that is. Yeah). Anne Boleyn is credited for introducing many cool "French" things to England, including: the French hood, French Bibles, French toast, French manicures, and oral sex. While at the English court, Anne fell in love with a fop named Percy, and the couple planned to elope to escape the wrath of their fathers, but Cardinal Wolsey, some fat guy who was one of the King's ministers, found out about the plan and proved to be a prick when he forced them to separate. As a result, Anne became quite bitter and adamant that she would instigate Wolsey's downfall. And for the record, "instigate" is a good word.

Mary Boleyn was the first of the sisters to catch the eye of Henry VIII when they were at court. Needless to say, the dude had a few thousand mistresses and he took her as one more. She was known as a ‘great prostitute’ so of course the King was all about that shit. I guess she wasn’t slutty enough for him though because he eventually got bored with her and tossed her to the gutter like so many other ladies. Henry was a true playa. Eventually Henry saw Anne and fell in love, acting like a dog in heat, minus the surprise humping from behind.

She however was a little more ambitious and refused to settle for sloppy seconds (well, within the family that is…who knows what number she was out of, HA HA) without some prestige and shit in return. When she got his attention, he sent her gifts and some sweet bling, but she refused all of them. She wouldn’t even have sex with the guy unless it was as husband and wife. Nowadays that would send a man running from the hills, but back in the 1500’s they saw her as very honorable and the King went gaga over it. By the way, this was all before Henry got all fat and pussy. Anne had standards, obv.

The whole “Anne was an ugly bitch” issue[edit]

A lot of rumors fly around (at least in my friend’s history class) about what Anne Boleyn looked like. They have a lot of crap like she had a bad complexion, six fingers on her right hand, blah blah. Let’s put some shit in to perspective, folks:

Well, because Henry was, I dunno, the KING OF ENGLAND, he eventually got his annulment and married Anne ASAP. In turn Anne got her revenge on Wolsey and he was banished from court, later dying of an STD probably. The people were not pleased and when she was crowned, they still referred to Catherine as their true queen. I’m not sure why; from what I hear she had a bit of a flatulence issue. Henry was tenting his fingers with the idea of finally giving birth to a son (chauvinistic prick).

But it wasn’t meant to be. All Anne did was get pissed at Sir Thomas Cromwell, who instead of reforming the church, fucking obliterated it, and gave birth to a daughter that would some day show men how it is done when you rule a country by accomplishing shock and awe because she was a girl. To Henry, this was not the rightly behavior of a queen! He claimed their marriage MUST have been due to witchcraft, rather than him just being a giant hornball.

To Cromwell, he didn’t like the idea of some bitch telling him what to do, or he had a crush on Henry or something, so he gathered some of his friends and tortured them in to lying about sleeping with the queen. Because Henry was obviously the most gullible ‘tard in the History of England, he believed it and had Anne arrested for adultery. Adultery on the part of a queen was not a treasonable, civil offence necessitating execution: the accusations were designed to impugn her moral character. The treason was plotting, with her "lovers", the king's death, to ostensibly marry one of them afterwards—Chuck Norris.

Anne was taken to the Tower of London and got the joy of watching her buddies die of treason: Her brother Boy George, Mark Smeaton, Henry Norris and almost Chuck Norris, but he flash-kicked his way out of that situation. Henry had their marriage annulled so he could marry that Dr. Quinn Medicine woman.

On the morning of Friday 19 May, Anne Boleyn was to be executed. She wore a red petticoat under a loose, dark grey gown of damask trimmed in fur and a mantle of ermine. You have to look your best when you’re about to get fucking decapitated. Accompanied by two female attendants, Anne made her final walk from the Queen's House to Tower Green. Anne climbed the scaffold and made a short speech to the crowd:

She said all that to avoid her family being fucked over any further, but here is what scholars assume she really wanted to say:

She then knelt upright. Her final prayer consisted of her repeating, "There better be a heaven, or else this is going to suck." The execution was swift and consisted of a single stroke. I’m sure it was still pretty fucking bloody though.

To add insult to injury (or fatal wounding, rather) Henry had failed to provide a proper coffin for Anne, and so her body and head were put into an arrow chest and buried in an unmarked grave in the Chapel of St Peter ad Vincula. What? You're actually surprised about that? Read above; it was obvious Henry was a fat bastard (the douchbag kind, not the 'doesn't have a father kind')