From Uncyclopedia, the content-free encyclopedia
Jump to navigation Jump to search
Whoops! Maybe you were looking for Boxes? 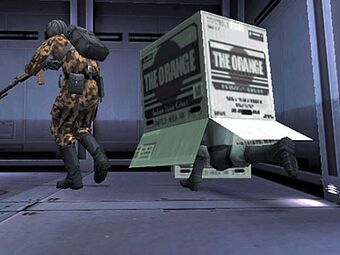 The B.O.X. in action. This modified version was also specially designed to muffle the sounds of an agent's footsteps, even on echoing metal floors

Cardboard boxes are industrially-prefabricated boxes used for packaging goods and materials, and are usually associated with homelessness. This is generally, if not always, true for hobos and bums. Secret agents, however, use these boxes with much more purpose and have saved the world countless times while pretending to be a crate of fresh Florida oranges. After some time though, the secret agencies that employed these secret agents for these secret missions in secret places with secret hot chicks who are secretly counter agents who then secretly fall in love with the secret agent and thus secretly help the secret agent with his secret mission, decided the box needed an upgrade...secretly.

The outcome was the Bio-mechanical Orange-crate of eXtremeness, or B.O.X. for short. The box came with an array of features, including night-vision, a first-aid kit, and a complementary Vogue magazine for those long missions. The box also came with the words THE ORANGE printed clearly on the side, to assure any suspicious guards that yes, there are oranges in this box. This countered the old box, which had faded letters that weren't as legible, and often drew the suspicion of lone guards, who would ask aloud, "What's this?" and then give the box a kick, much to the dismay of the agent crouching inside.

The response, however, was less than supportive. Many agents had negative reviews of the B.O.X, claiming that it "took too long to assemble," and couldn't be used in morning missions for fear that "the guards would want some fresh O.J." It wasn't until the arrival of Agent Snake in the late 19-somethings that the popularity of B.O.X. really took off.

The Cold War was a time of intense hostility between the U.S. and the USSR. Both sides were trying new ways to conduct espionage and sabotage against each other, and constantly finding ways to counter the other side's spies. The Americans would send a young, dashing son-of-a-gun deep into the heart of Moscow, only to have him killed in an unfortunate and accidental car crash, caused by the car being shot to pieces by GRU agents with kalashnikovs.[1] The Russians would then counter by saying that their agents had fired warning shots and had in no way intended to fire over 843 rounds into the car — their goal was only 2, but the trigger was stuck and Russians can't count.

The Russians would counter by sending an equally, if not more, attractive female agent into New York City, as the Russians still believe that to be the capital of the United States.[2] However, the Russians would also be disappointed, as their agent would usually become infatuated with an English agent, and would later run away with him to islands that are sunny 24/7 and give a free Corvette to visiting spy couples. 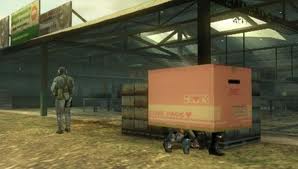 The B.O.X. even covers up the moaning of that Russian spy you somehow managed to bang.

It seemed that both sides had exhausted all strategies of espionage, until a small-time 20-year-old government employee from Minnesota stood up in a meeting and shouted, "We should start focusing on sending agents who actually know how to speak Russian and aren't just good-looking, and maybe we should give them useful tools like automatic weapons, instead of useless crap, like pens that turn into inflatable rafts that repel beavers!"

"Shut up Ferguson, you nitwit!" replied the senior officer down the table. "Why in hell would we need competent agents? What we need is better technology for stealth and espionage, like an Invisible Potion. Or a shirt that says You Don't See Me. Hell, even a box over the head might do..."

"Wait, what did you say?" spluttered the chief of espionage, with a quizzical look. "A box?....Of course! Boxes are simple! And...and no one would expect an innocent piece of cardboard to betray them.....Hmmmmmm."

Shortly after that unnecessarily long "hmmm" session, the idea for B.O.X. was born.

In 1964, a CIA agent was dropped in the jungles of Tselinoyarski — or something like that. Armed with only a tranquilizer gun, a pistol and an uncanny ability to eat any type of plant or animal around him, the agent was entrusted to save a man of grave importance: a Russian scientist named Sok..Sokluv? Sucalot? [3] Whatever it was, the agent knew it started with an S. 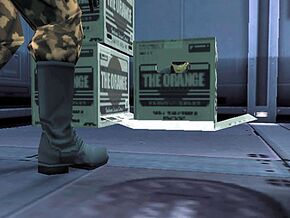 Pay no attention to the box with eyes.

What he didn't know was that his officers had also equipped him with a new weapon of ultimate disguise. The agent, codenamed Naked Snake, would soon discover the usefulness of the tool as he came nearer to his target. Cornered and without ammo or tranquilizer darts, the agent, running out of time as the Russian soldiers approached, noticed a group of boxes in the corner and had an idea....As they turned the corner, the soldiers, ready to fire, were surprised to find nothing but a ventilator shaft...and some unusually-placed boxes of oranges.

Unable to spot the intruder and uninterested in the orangy contents of the boxes, the guards gave the "All Clear" sign and slowly walked back to their posts.

Naked Snake was saved, and was thus able to complete the rest of his mission with little or no hindrance.[4] The success of the mission brought the B.O.X. praise from all sides of the U.S. government and was quickly commissioned by every department. For years, the B.O.X. was the workhorse of the U.S. spy agencies and was somehow always a good cover for agents, even in spaces one would never expect to see a fresh box of oranges, such as in inside a ventilation shaft, in front of a security post, or inside a room with a door marked "NUCLEAR MISSILE CENTRAL CONTROL".

As time went on, nations began investing in spy-detecting tools that actually worked like heat-vision goggles, as opposed to the more popular X-Ray Goggles that failed to even give the user the ability to see through girls' shirts (as promised in the magazine ad's description). The U.S. decided that it was time to upgrade the B.O.X. to counter these detection tools and produced B.O.X. v. 2.0. The inside of the new B.O.X. was lined with thin sheets of aluminum and had all sorts of new gear and gadgets, leading the new B.O.X. to be officially named Metal Gear B.O.X. The new box would be used by many agents and had varying degrees of success. 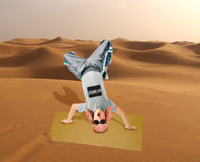 Amazingly, the subterfuge was almost instantly detected by the well-trained Iranian soldiers.

Unfortunately, this new generation of B.O.X. technology was recently lost during a recon mission close to Iran when the B.O.X. malfunctioned after its handle-holes ripped and the corners split, leaving the agent in the middle of the desert with a cardboard break-dancing floor. Despite the furious break-dancing of the agent, the Iranian guards saw through the ploy and knew the man was not a Bedouin break-dancer, but rather an American agent equipped with some sort of high-tech material. Both agent and B.O.X. were apprehended and displayed on Iranian news, much to the embarrassment of the U.S. government. However, the news was overshadowed by the capture of a U.S. drone shortly after, and was no longer relevant to the public. The agent was later released, and since the B.O.X. was damaged beyond repair, there was no threat of having the complex cardboard-box-manufacturing technology falling into Iranian hands. The government decided to limit the use of the B.O.X. to mitigate any future risk of technological loss.

After the decision to limit use of the B.O.X. by the U.S. government, reports of it around the world have become more infrequent and sporadic. The only verifiable news is that a new agent, codenamed Solid Snake, has been entrusted as the sole user of the B.O.X. It has also been said that Solid Snake has not been able to use the B.O.X. has efficiently as his predecessor Naked Snake did, but it's hard for a son to be as great as his father, especially since his father saved the world from nuclear disaster, defeated an entire secret organization that ruled the world, and still managed to look younger than his son.[5]Despite the short-comings of the disappointing prodigy, the B.O.X. still played a vital role for a couple of more years. However, its role has become less important for missions due to the invention of stealth technology and camo suits. As a result, the U.S. military recently decided to relieve the B.O.X. of any major military involvement and ended its career by folding it up and storing it in the Pentagon closet for later use — holding Christmas ornaments.

It has been rumored that the last B.O.X. remaining was sold to the creator of Calvin & Hobbes, Bill Watterson. Reports show that Mr. Watterson changed the wording on the B.O.X. from Orange to Transmogrifier Box, and now spends most of his time inside of it, making VOOM and Ker-POW sounds and occasionally throwing into it an orange-and-black striped stuffed tiger he calls "Hobbesy." 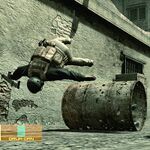 The B.A.R.R.E.L being used to dodge a soldier falling from the sky. The image has yet to be verified.

Mr. Watterson declined to comment when asked about it by reporters.

As a result of the decline of the B.O.X., the U.S. government has been forced to find new equipment for its spies to use as cover. Although there have been rumors of failed designs, such as "Ghost" masks and "Peek-A-Boo" prosthetic hands, there is still some hope within the U.S. R&D departments that a new technology will be developed and supplant the B.O.X. in efficiency and popularity.

Scientists believe they may have come up with something, but released few details regarding it. All that is known it that the project has been nicknamed B.A.R.R.E.L. and will be more mobile than the B.O.X. A reporter reportedly managed to get a picture of the B.A.R.R.E.L. in trial use, but this image has yet to be verified. All we can say for sure right now is, we can't wait for the sequel...

The End. Oh, And The References[edit]