Unitarian Universalism is a religion founded on the principles of A, B, and C, where A, B, and C are principles that you happen to believe in. Many come to worship here, including Hindus, Muslims, Agnostics, Atheists, Heretics, Furs, Pagans, Witches, Judeo-Christians, Buddhists and Loyal Servants of Odin, High Father.

In 1961, there was a general agreement among the leadership of the Unitarian Church in America, American Universalist Association, the Stonewall Democrats, and the League of Women Voters, that combining would provide their congregations with questions to all of their theological answers. A committee was established, whose model became a guideline for all church actions to become: twenty churchmembers sat in a circle to discuss the ecological implications of merging their churches, fifteen debated labor practices and minimum living standards for the employees of companies that the church buys products from, eleven discussed paint colors and which archaic drinking vessel should become the church symbol, and one went off on her own and did all of the work necessary for the merger. All references to particular creeds and beliefs were struck from the church bylaws, and all church copies of the Ten Commandments were relocated to federal courthouses. The meeting was closed with a prayer to "anyone who happens to be out there, or not."

While the initial merger was a success, hostility to the Unitarian societies began to spread among Christian denominations, most prominently in the south. Dozens of incidents were documented where mobs clad in robes and speaking Aramaic burned question marks in the lawns of Unitarians. Sierra Club headquarters were bombed, and a dozen churches were razed -- leading to great consternation among Unitarian churchgoers about the amount of trees that would have to die in order to rebuild.

Most UUs take an easy going approach to church attendance. That is, if you feel like it, you can show up. If not, then you can be there in spirit. Unfortunately for many churches, a person's spirit generally does a poor job of providing financial support for the congregation.

For those without comedic tastes, the so-called experts at Wikipedia have an article about Unitarian Universalism.

The church has no formal recruitment process for obtaining new members in contrast to a number of other denominations. Most people stumble upon a local church by accident when they get lost looking for the new all-natural organic pet department store that set up shop nearby. When they see all the cars in the parking lot with bumper stickers such as "Curb your dogma at the door", they are mislead into entering the sanctuary with Fido in tow during Sunday service. Most congregations are so used to this phenomenon that no attention is paid and the person quickly feels at home among the fellow vegan tofu-eating hemp-wearing pet-lovers.

The five sacraments are Dedication, Marriage, Memorial Service, Argument, and Voting. A sixth sacrament regarding the exclusive use of consensus committees for decision making was debated by a committee at the 1992 General Assembly meeting. However, no consensus could be reached on the subject.

Easter is the day that Jesus rose from the grave and ... saw his shadow, went back in and we get six more weeks of winter?

It's Adam and Eve, OR Adam and Steve, OR Lilith and Eve. Other options added as necessary.

"How The Grinch Stole Christmas" was a foreshadowing allegory about Newt Gingrich's "Contract with America".

No burning of heretics, or there will not be anyone left in the religion.

Do not burn witches or there will not be anyone around to tell us what to do during a solstice or equinox.

Many gods and/or one God at most.

There has been no official decision however if any of the above is true. 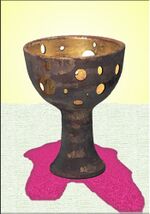 Holey chalice "To Whom it May Concern; we light this chalice for all that is holy, whatever that happens to be."

(The Flaming Chalice should not be confused with The Goblet of Fire of Harry Potter fame, though there are a lot of his fans in the religion.)