Rick James Version of the Bible 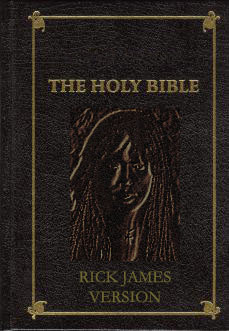 The Rick James Version of the Bible is a funky and soulful translation of the Holy Bible, devised and executed by master theologian Rick James, and his heavenly associate, Dr. Charlie Murphy (with introduction by His Holiness, the Dalai Lama). First published in 1981, it was the first printed edition of the Holy Book that could be readily absorbed and understood by speakers of Jive. It was also noted for being the first Holy Book to contain the famous Biblical Messiah Black Jesus. Many famous people have derived inspiration from the pages of this work, including MC Hammer, Dave Chapelle, and Li'l John.

The RJV has recently been in conflict with a newer translation by Bill Cosby known as the Bill Cosby Version of the Bible. Supporters of the BCV argue that the RJV does not use proper English, while supporters of the RJV argue that the BCV is too assimilationist, not provocative enough, and contains too many advertising spots for Jell-O Pudding. They also believe the phrase "Jammin' on the One" sucks ass. This split over biblical translations is one of the major divisions in contemporary Black Christianity.

Below is a list of several excerpts from this master work:

(1:1) At da damn start uh dis bitch, God made His-self some fly-ass crib, and one fo' our asses, too. 'S coo', bro. Den, He dun made all da little animals and niggas and black Adam and black Eve.

(1:4) Now God could see shit, and He saw dat it dun be da shiznit, and den He separated da light and da dark. Ya' know?

(1:5) And God called da light ‘crackers’, and da blackness he called ‘brudas’, and dat’s how it bizz fum day one, bitch. Lop some boogie.

Wikipedia doesn't have a proper article about Rick James Version of the Bible. Those obsessed with so-called experts should thank their lucky stars.

(11:1) And Kin' David dun look out uh his fly-ass crib and he dun saw da most damn fine bitch he eva' saw, so cut me some slack, Jack.

(13:23) And Jesus dun didst look down on Phillip and He answered dusly, "You's gots seen fine honky chicks wuzhin' Mah' feet and partakin' uh Mine Sacrament, fo' honky chicks is naturally attracted t'Saviours. Whut part uh dis do ya' not ya' dig it?"

(13:25) "If whut dis joker says be true, dan no honky chick should deny him. WORD! But who could be so's blind as t'recon' in de powa' of some man who claims he gots neva' touched some honky chick?"

(13:36) And Jesus dun didst look down on Peter and He answered dusly, "Hardcore Hallelujah! Right on!"

(1:2) He wuz wid God at da damn start uh dis bitch, when God made Himself some fly-ass crib, and one fo' our asses, too.

(1:3) Drough him all doodads dun wuz made; widout him nodin' wuz made dat gots been made. WORD!

(3:2) He came t'Jesus at night and said, "Rabbi, we know ya' is a head homeboy who gots come fum God. Fo' no one could puh'fo'm de miraculous signs ya' is hangin' if God wuz not wid him. WORD!"

(3:16) Fo' God so's loved da damn wo'ld dat he gave his only begotsten Son, dat whoeva' recon's in him shall not puh'ish but gots everlastin' life.

(4:21) And he decred that all men shall be united, and that it shall be imprintethed in thy black head ."

(4:23) And behold, they turned over to the Darkness, held down his legs, an beteth on his legs, untill they lookethed like linguini."

(4:24) Then da savior decreed that, lo, thy never should have gaven thy niggers of thy Darkness currnecy."

(4:25) Thy Lord, being mercifull and kind, made an offering of peace to thy Darkness, offering the Stickies of Thy Icky, and lo, peace was again come to the land."