From Uncyclopedia, the content-free encyclopedia
(Redirected from LOGO)
Jump to navigation Jump to search

There are many myths surrounding the logos the most popular is that evolved from the lock ness monster (hence him being the last one, he didn't evolve cause he was holding the everstone Funking DUH!!). Logos are large creatures that occasionally go on a violent rampage, usually in Tokyo city. The most well known logos that have these outbursts are Godzilla who makes a come back every 10 years with better animation and arm movements. Also Mickey Mouse who has a Senior Moment every couple of days (it happens so often now that the footage goes straight to DVD and every one downloads it illegally because its not worth paying for) But the most memorable Micky Mouse Attack was when he was a giant albino driving a huge boat through downtown New York.

Because, over time, the public associates the logo with the corporate or government entity for which the logo stands, a logo is seldom replaced by a new icon. However, as a result of a federal law requiring truth in advertising, from which the government exempted itself, many companies have recently redesigned their logos.

When a product's name suggests that it is related to something other than its actual concern, a logo must now indicate the product's true nature. 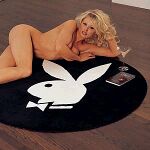 Playboy is not about males in playpens, as its name suggests; it is about nude women ("tits and ass," or "T & A"), as the magazine's new logo indicates.

Since Coca-Cola's international expansion is not about selling a soft drink as much as it is about spreading capitalistic greed over as much of the earth's surface as possible, the company has been compelled to alter its long-time logo.

Many automobile manufacturers sell machismo or virility (i. e., manliness) instead of cars, so a generic car dealership logo will be displayed, without regard to automobile make or model, at all new car dealerships, with established car lots mandated to adopt the new logo by January 1, 2015.

Although Wal-mart offers low prices, its employment practices (not allowing employees to work full time so as to avoid providing them health care and vacation benefits, requiring employees to work through their lunch breaks or off the clock, paying indecent wages that maintain employees' poverty-level existence) and effects on the community (destruction of small businesses, blights on the landscape, abandonment of stores that are closed) has led to the requirement that it change its logo to reflect these policies and outcomes.

The new laws intend to advise consumers as to the true nature of the goods and services that companies offer for sale, lease, or rent, so that customers can purchase commodities with freater consumer confidence. 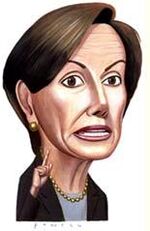 Although a handful of politicians running for election against entrenched encumbents did argue that the legislation should be amended to require that the federal government apply the same truth-in-advertising standards to the services that it provides to taxpayers, it is unlikely that such changes to the law will be forthcoming, Congressman Nancy ("Hairy Legs") Pelosi says.

Americans, she contends, don't care about shoddy goods and dubious services. "They don't give a rat's ass about getting their money's worth," the outspoken Congressional leader maintains. "If they did, why would they keep electing idiots like me? What Americans do want is abortion on demand, including live-birth abortions; tax increases to support more and more government programs that affect fewer and fewer Americans; equal rights for all illegal immigrants undocumented aliens; a flag-burning protection amendment to the U. S. Constitution; the outlawing of gun ownership; embryonic stem cell research; the institution of euthanasia-on-demand; the release from prison of Dr. Jack Kevorkian; and the immediate exile of Christians, white men, heterosexual women, conservatives, Republicans (particularly "the stupid and incompetent President George W. Bush").

However, she suggests that breast augmentation, whether through whore moan hormone therapy or surgery; the shaving of legs or "other body parts"; the use of cosmetics; and "misleading undergarments" be oulawed for women. "As feminsists, they need to be truthful about who--and what--they are," the congressman opines, adding, "I haven't shaved my armpits or legs in fifteen years, I don't have artificial breasts, I don't wear makeup, and I haven't had sex with a vile, disgusting man ever."

Critics contend that remarks like those of Congressman Pelosi show that politics and advertising are inseparable, except when it comes to exempting government from its legislators' laws.